The Most Dangerous Game by Gavin Lyall: A Review (Hodder & Stoughton)

For this latest Spy Fiction Fortnight post, I thought I'd share some thoughts on a novel I actually read ages ago in a battered Pan paperback edition, but never got round to posting much on it. However, recently I was struck by one of those queer collecting impulses that suddenly overtake me – quite unbidden – and nabbed myself a 1964 Hodder first edition of the book, with a dustjacket designed by "Studio Stead" – a.k.a. Biggles illustrator Leslie Stead (partial non-Biggles cover bibliography here). And seeing as there's an espionage element to the story, now's as good a time as any to write about it. 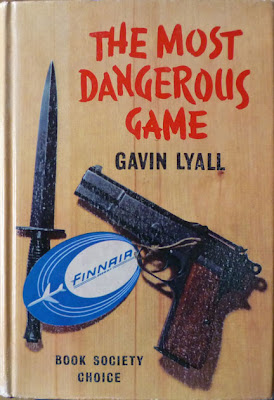 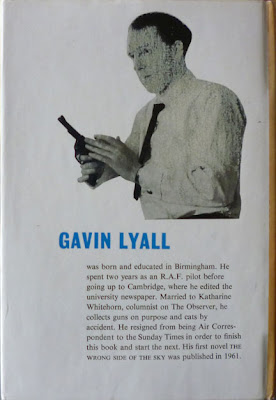 The Most Dangerous Game was British thriller writer Gavin Lyall's second novel, following 1961's The Wrong Side of the Sky. Like its predecessor – and indeed like many of Lyall's novels during this stretch of his career – it's a first-person actioner starring a hardluck, hardbitten pilot, in this case Bill Cary, a Second World War veteran who ekes out a living flying survey missions for mineral companies around Finland. Hired by a mysterious – and moneyed – American hunter, Frederick Wells Homer, to take Homer in search of bears, Cary soon gets mixed up in a murky plot involving gold sovereigns, the Finish secret police, and eventually the British Secret Service, culminating in a dangerous mission over the border into Russian airspace.

Whereas The Wrong Side of the Sky was essentially an island-hopping treasure hunt, The Most Dangerous Game is rather more nuanced. With its pilot hero, gold sovereigns and assorted crims, it starts off as if it's going to follow the same blueprint as Lyall's debut – except in a chillier clime – but it soon becomes clear there's more going on here than simple smuggling. Pretty much everyone Cary meets has an ulterior motive or a hidden agenda, in particular Arthur Judd, an Englishman supposedly in the area for a spot of fishing and to research cheap timber. But Judd is just one among many multinational oddballs Carey comes across, including a caravanning Frenchman, a couple of cranky Germans, Homer's femme fatale sister, and Homer himself, who's perhaps the oddest of the lot, a mild, secretive sort who's quite possibly completely off his rocker.

With all these strange characters swirling around, it's no surprise that The Most Dangerous Game is full of Lyall's trademark snarky, lively dialogue. 'Go away. I'm busy dying,' a hungover Cary tells Lapland's biggest criminal early on in the book; and then later, in a conversation with a Finnish copper, Cary reveals that he got jumped by a couple of thugs the other night. The policeman asks:

P. G. Wodehouse reckoned The Most Dangerous Game was "even better than The Wrong Side of the Sky," adding: "It is one of the best thrillers I have ever read." I'm not sure I'd quite go along with that; at the time it may have been true, but of course Lyall himself went on to write a number of equally well-regarded thrillers. It is a terrific read though – a former Pilot Officer in the Royal Air Force, Lyall is always good on the intricacies of aviation, and there are some excellent seat-of-your-pants flying (and crashing) sequences in the novel – and certainly up there with the best of the 1960s. It's just a shame that, like many of Lyall's books, it's slipped quietly out of print.

So then. What shall we have next in Spy Fiction Fortnight? Hmm... Well, no focus on espionage fiction would really be complete without a guest appearance by that towering presence in the field, James Bond. And it just so happens that I have a recent Lewes Book Bargain that fits the bill – although in this instance, it's a Bond novel not written by Ian Fleming but rather by Kingsley Amis, in an edition featuring a cover by our old friend, Beverley le Barrow...
Posted by Nick Jones (Louis XIV, the Sun King) at 06:13