And so we reach the end of Bleeck Week, a week which, if you haven't worked out by now what it was all about, then there really is no hope for you. Just take yourself off to the previous posts on Ross Thomas/Oliver Bleeck's four prior Philip St. Ives novels here, here, here and here, and I'll see you back here when you're done.

All finished? Right then. Let's have a look at the final Bleeck book: 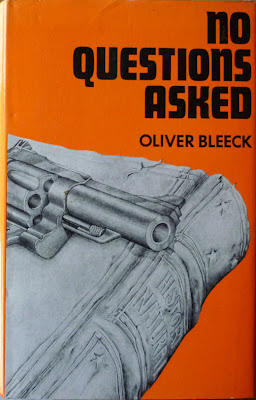 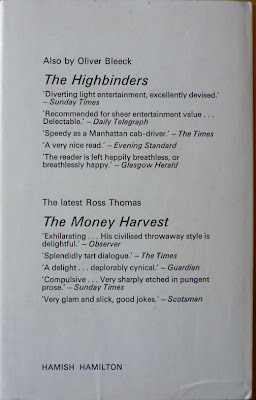 Which is the UK hardback first edition of No Questions Asked, published by Hamish Hamilton in 1976 – originally published in the same year in the States by William Morrow. And as you can see, for some reason, Hamilton elected not to use the singular services of their go-to cover photographer Beverley le Barrow for this one – unlike yesterday's copy of The Highbinders – which makes No Questions Asked quite unusual among that run of Hamilton editions of Ross Thomas's novels from 1974-79. The dustjacket is, however, different to the American cover (which you can see on the right there), and was designed by Ken Reilly, a well known illustrator and packaging designer still going strong today.

Shall we cast an eye over the jacket flap copy to get a sense of the story? Let's.

Philip St [sic] Ives, that most professional of professional go-betweens, has had some strange and dangerous cases to handle before, but his latest assignment is something out of the ordinary. A copy of Pliny's Historia Naturalis has been stolen and is now being ransomed for a quarter of a million dollars. At the same time, Jack Marsh, a well-known private detective supposed to be guarding the book in transit, has been kidnapped. So St Ives finds himself in snow-covered Washington involved in a deadly game of deception and murder, and attempting to survive long enough to recover the stolen book.

No Questions Asked is fast-moving and entertaining – as readers have come to expect from Oliver Bleeck novels.

Indeed we have. I had to get this Hamilton copy of No Questions Asked from New Zealand, as there weren't any for sale in the UK. This was before the recent appalling earthquake over there, mind, although Lotsabooks, the store I bought it from, is in Hamilton, some way from Christchurch, where the quake did its worst. Even so, I hope all over there are safe and well, and I can thoroughly recommend buying books from them, as this copy arrived in not much more than a week and in near-fine condition.

And that brings us to the end of Bleeck Week. Next week I had planned on doing a week's worth of espionage-themed posts as a sequel to last year's Espionage Week, but I've now decided against that. Instead, I'll be doing two weeks' worth of espionage posts, as I have so many books to cover I won't be able to fit them all into a single week. So look out for Spy Fiction Fortnight, coming your way very soon. And if you're really lucky, I might even post a preview of that over the weekend...
Posted by Nick Jones (Louis XIV, the Sun King) at 05:45