And so this week's worth of posts on crime/espionage/thriller writer Ross Thomas's pseudonymous series of novels starring urbane go-between Philip St. Ives continues with a book which should really have been the second post this week, not the third: 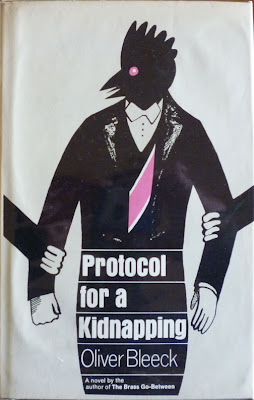 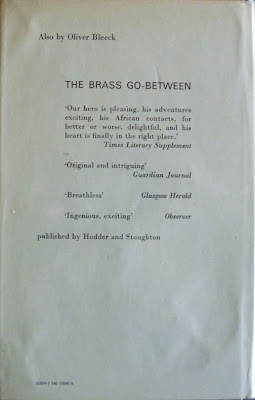 This is the UK hardback first edition of Protocol for a Kidnapping, published by Hodder & Stoughton in 1971 – the same year, in fact, that the US William Morrow first edition saw publication. And as we established in yesterday's post on The Procane Chronicle/The Thief Who Painted Sunlight/St. Ives – a missive so tiresomely tortuous I suspect it would have tried the patience of a saint – Protocol for a Kidnapping is the second novel in Bleeck/Thomas's St. Ives series, not the third. That's also been confirmed by Ross Thomas aficionado Book Glutton, who, in a comment on Monday's post about The Brass Go-Between, revealed that "early in Protocol for a Kidnapping, St. Ives makes a direct reference to his recent African shield fiasco (which means the first book, The Brass Go-Between). That makes Protocol the clear number two." So really, as I say, I should've posted this yesterday.

Never mind, eh? Let's put it behind us, and take a look at the dustjacket flap copy on this edition of Protocol for a Kidnapping:

Philip St. Ives, the top professional go-between introduced last year in The Brass Go-Between, is back in action. In this new novel of intrigue, St. Ives is coerced by the Department of State into recovering the U.S. Ambassador to Yugoslavia. The diplomat has been kidnapped and is being held for a ransom of $1,000,000 and the release of a Nobel Prize-winning poet. It's a complicated assignment that becomes downright deadly as St. Ives finds himself involved with a Broadway actor, a 30-year-old millionaire, the poet's breathtakingly beautiful daughter, and a sexy CIA agent.

One million dollars, eh? How very Austin Powers. Intriguingly, the back flap copy states, "OLIVER BLEECK [their caps, not mine] is the pseudonym of Ross Thomas, one of the world's outstanding suspense novelists", and then goes on to list Thomas's non-pseudonymous hits. And yet, on the back flap of The Thief Who Painted Sunlight – which was published in the UK a year after Protocol – it merely states, "Oliver Bleeck is the pseudonym of a well-known writer". So did Hodder mistakenly 'out' Thomas on Protocol and then for Thief hope that readers either had a very short memory or hadn't read a Bleeck before?

The dustjacket design on Protocol is by Lawrence Ratzkin, who I covered fairly extensively in this post on Ross Thomas's The Backup Men, published in the same year as Protocol. So I don't have much to add about him here, except to mention that I did chance across this 2010 article in Glasgow's The Herald newspaper on the controversial "Ground Zero mosque" in New York, in which Ratzkin is quoted taking an anti-mosque protester to task. "This country has a document that guarantees freedom of religion," Ratzkin tells him. "If you believe in this country, whatever your feelings, you have to live by that." Go Lawrence. If nothing else, it proves that, as of 2010, Mr. Ratzkin was alive and well, something I wasn't sure about in that Backup Men post.

The dustjacket on the Hodder edition of Protocol for a Kidnapping seems to be identical to the Morrow edition, so there's little point in showing you the American one. But as we'll see in the next post, when Hamish Hamilton picked up the UK Bleeck rights from Hodder with The Highbinders, the cover designs for the novels took a turn for the... idiosyncratic...
Posted by Nick Jones (Louis XIV, the Sun King) at 04:50