Now what the Dickens is this? Didn't I proclaim at the end of the previous post in Bleeck Week – a week of posts on espionage/crime/political thriller writer Ross Thomas's pseudonymous Oliver Bleeck novels – that the next book I'd be featuring would be The Procane Chronicle, the second – some say third; I'll come back to that – novel to feature urbane facilitator Philip St. Ives? Well then why am I showing this instead: 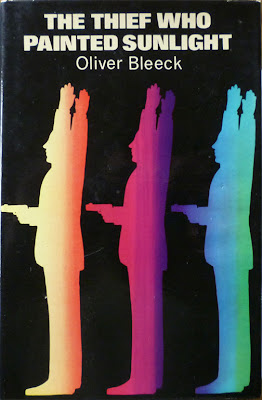 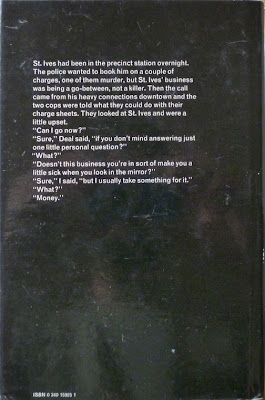 A UK hardback first edition of The Thief Who Painted Sunlight, published by Hodder & Stoughton in 1972? The answer, my friends, and as the more astute among you will already have discerned from one of the parenthetical asides in the title of this post, is that after its US William Morrow debut earlier that same year, The Procane Chronicle was subsequently published here in the UK under a different, rather more allusive name.

And it's not the first time a Ross Thomas novel has had an alternative title in the UK either. The first UK edition of his debut novel, The Cold War Swap, was retitled – again by Hodder – as Spy in the Vodka, copies of which are quite scarce and also quite pricey. Although not as scarce and pricey as The Thief Who Painted Sunlight, where, at time of writing, there are only four copies available on AbeBooks from sellers in South Africa, Australia and the US, the best of which would set you back as much as £140 for a fine copy. (Mine came from a UK dealer, The London Bookworm in Hastings, not far from the town where I live, Lewes. It was the only copy I could find for sale in this country; my friend Lynne in California convinced me to take the plunge on it, and the lovely couple who run the store did me a nice deal, bless 'em.)

But the retitling of The Procane Chronicle didn't stop with The Thief Who Painted Sunlight. Oh dear me no. Because this particular novel also formed the basis of the 1976 movie St. Ives, starring Charles Bronson as Raymond (sic) St. Ives. And that same year Pocket Books in the States reissued the novel under the title St. Ives. (The book reverted back to its original title thereafter.) That explains that one at least, but as to where the title The Thief Who Painted Sunlight springs from, well, let's let the dustjacket flap blurb on the UK Hodder edition clear that up:

Many people are successful. Abner Procane, for one, was remarkably so; he was a very successful thief. One of the reasons was that he took money only from people who didn't like to admit they had it in the first place, and were too shy to tell the police about it when it was gone. Abner Procane lived well, prospered, and had all the nice things you expect people with a certain amount of money and taste to have. On Sundays he painted, rural scenes and suchlike, and if you liked that sort of thing you could say that he caught the sunlight pretty well. His one conceit was to keep a diary that recorded, with picturesque precision, the details of the jobs that had made him rich. And his last ambition was to pull a million-dollar heist before he retired. That was when some smart villain stole the diary and offered to sell it back for 100,000 dollars, and that was when Philip St. Ives was called in to act as go-between.

What followed wasn't easy; it wasn't civilised. Mr. Procane wouldn't have used the word, but it was smelly. There were killings, a lot of them. There were hard-nosed cops. And there was heroin. St. Ives didn't like it one little bit but the way he was fixed he couldn't get out. Besides, who wanted to miss out on the crime of the decade?

Hmm. Little long-winded (much like this post is becoming...) – it's barely worth reading the novel after all that – but at least it kind of explains that title. One thing the dustjacket doesn't reveal, however, is who designed it, which is quite annoying, as finding that out was one of my reasons for buying it in the first place. I suspect it might be either Kaye Bellman, who designed the jacket for UK Hodder edition of The Brass Go-Between, or Lawrence Ratzkin, who designed the jacket for the 1971 St. Ives novel Protocol for a Kidnapping (as well as that of another Ross Thomas novel also published in 1971, The Backup Men). But the answer may well be on the jacket of the '72 US Morrow edition. Because as I discovered whilst researching (I use the word loosely) the US first, bar the title, the cover is identical to the UK edition: 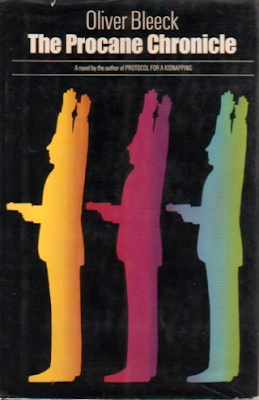 So if anyone reading this post has a copy of the Morrow edition, perhaps they can enlighten me as to who designed the jacket. And something else the American first edition cover revealed once I'd tracked it down was the running order of the St. Ives novels. Right there under the title it clearly states "A novel by the author of PROTOCOL FOR A KIDNAPPING". So Procane/Thief is indeed the third St. Ives book, not the second – a publishing history that's since been confirmed by Book Glutton – who's read all the Bleecks – in a comment on the previous post. And actually, on the dustjacket back flap of The Thief Who Painted Sunlight, both The Brass Go-Between and Protocol for a Kidnapping are listed under "Other thrillers by Oliver Bleeck". So I probably could've worked it out just by looking at my own copy. Harumph. What was that about "research"...?

All of which means that this list and this post are wrong, and that, for once, Wikipedia is correct. But more importantly it means that I've written these posts in the wrong bloody order. Buggeration. Ah well. No matter. Because coming up next in Bleeck Week it's the second Oliver Bleeck novel: Protocol for a Kidnapping...
Posted by Nick Jones (Louis XIV, the Sun King) at 05:00