We're stumbling towards the end of Bleeck Week now, with just two more of the pseudonymous Philip St. Ives thrillers written by Ross Thomas to look at. And today it's the turn of the fourth St. Ives novel... not to mention the return of a cover photographer who's become a firm favourite in the palatial abode of Louis XIV (i.e., round my gaff): 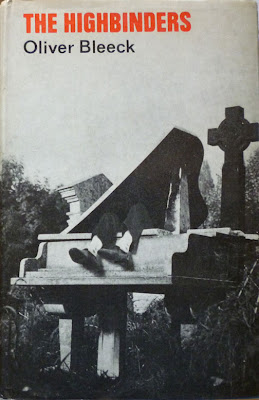 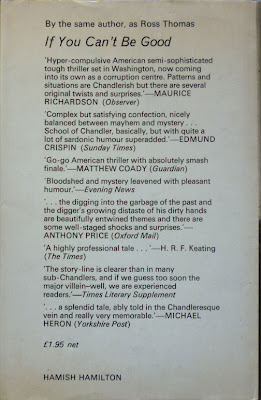 Seen above is the UK hardback first edition of The Highbinders, published by Hamish Hamilton in 1974 – originally published by William Morrow in the States in 1973. And if we take a look at the US cover: 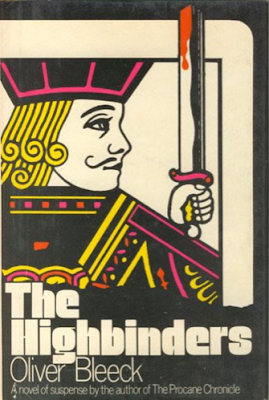 We can see that the approach on the UK one was a little... different... I'll come back to the design of the Hamilton edition dustjacket momentarily, but as is traditional by now, let's take a gander at its jacket flap copy to see what it's all about:

Professional go-between Philip St. Ives finds himself in a London jail even before he has accepted an offer from Ned and Norbert Nitry to recover the fabulous Sword of St. Louis which as (or has it?) been stolen from them and is being ransomed. When Philip does accept the offer, he becomes involved in a deadly game of deception and murder with a bizarre group of characters that includes two professional con men (highbinders). This is a top-flight novel of intrigue and fun from an acknowledged master of the suspense novel.

Good of Hamish Hamilton's copywriter to tell us what a highbinder is – I had no idea before reading that blurb – and also, the novel's set in London, from whence I hail (I didn't always live in Lewes, y'know). I've already spotted references to New Cavendish Street and Watney's the brewers, so it'll be interesting to spot other Lahndahn Taaahhhn locations...

As I mentioned in the previous post on the second St. Ives novel, Protocol for a Kidnapping (which really should have been the second post in Bleeck Week instead of the third – don't ask), after the third St. Ives book, 1971/72's The Procane Chronicle/The Thief Who Painted Sunlight, the UK rights for Oliver Bleeck's novels were picked up from Hodder & Stoughton by Hamish Hamilton. Indeed, from 1974 onwards, ALL of Ross Thomas's novels – pseudonymous or otherwise – were published by Hamilton in Britain. And for five glorious years from 1974–1979, the vast majority of those novels were graced by dustjackets 'designed' by Hamilton's go-to cover 'designer' – or rather, photographer – during that period, one Beverley le Barrow.

Beverley has featured on this blog numerous times now, both in conjunction with Ross Thomas books and with those by other authors, too. At first, in this post on The Money Harvest/Yellow-Dog Contract, then in this one on P. D. James's Cover Her Face, and subsequently in this post on the paperbacks of If You Can't Be Good and Kingsley Amis's The Alteration, and indeed this one on The Eighth Dwarf, I figured Beverley was a woman; with a name like that you would, wouldn't you? But by the time I got to Chinaman's Chance, I was starting to wonder whether Beverley le Barrow might in fact be a pseudonym. After all, in the Hamish Hamilton books with covers by Beverley, they were credited to "Beverly Lebarrow", while in other paperbacks, it was "Beverley le Barrow". Why the discrepancy?

And then in this post on the Panther paperback editions of Ian Fleming's James Bond novels (followed by this post on the box set of those books) I started to make the connection between Beverley le Barrow and famed Sun newspaper Page 3 photographer Beverley Goodway, theorising that they might be one and the same. That theory was later pretty much confirmed by Francis from the Stanley Morgan Website, who left a couple of comments on that Eighth Dwarf post saying that he'd got in contact with an American photographer who'd worked as Beverley's assistant in the '70s and asked him if Le Barrow was a pseudonym. Said photographer confirmed it was, and he confirmed he was a man, and he reckoned that he thought Beverley's real surname was... Goodway.

All of which convoluted nonsense means that the photo on the jacket of The Highbinders you can see up top – credited on the front flap to Beverly Lebarrow – was almost certainly taken by saucy Page 3 snapper Beverley Goodway, who seemingly moonlighted as a book cover photographer all through the '70s and '80s. Mind you, it doesn't explain why the picture on the front of The Highbinders depicts a bloke stuffed into a piano in a graveyard. What's that all about? Beverley was known for his, ah, literal interpretations of a novel's story or title – see Chinaman's Chance and The Eighth Dwarf – so presumably it's something to do with the plot of the book. Perhaps our resident Ross Thomas expert, Book Glutton – who in a comment on yesterday's post on Protocol for a Kidnapping revealed the meaning of that cover – can shed some light.

(UPDATE: And indeed Book Glutton has done just that – see comment on this post – and in the process pointed out that the piano is actually a tomb in Highgate Cemetery in North London (where Karl Marx is famously buried), known as the Thornton piano. It looks as if it's fallen into some disrepair these days, but if you google it you'll find lots of pictures of it through the years, including this one from 1977.)

Anyway, we'll be seeing more from Beverley le Barrow before too long. But next up, it's the final book in Bleeck Week: No Questions Asked.
Posted by Nick Jones (Louis XIV, the Sun King) at 04:14