From the Mid-Sussex Book Fair: The Honorary Consul by Graham Greene

The other weekend we made a return trip to the Mid-Sussex Book Fair, which takes place once in a blue moon in the little town of Hassocks, just over the border into West Sussex. Unfortunately this time out the Scientologists weren't in attendance, but there was still a good selection of dealers, and both Rachel and I came away with a book. I was slightly kicking myself afterwards as I saw another book there that was on sale for a lot less than it was worth, but on reflection I don't think it was in quite as good condition as I thought it was, and anyway it was thirty quid. Unlike the book I did buy, which was less than a tenner: 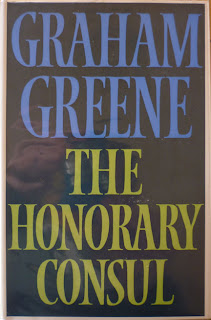 A UK hardback first edition of Graham Greene's The Honorary Consul, published by the Bodley Head in 1973. Copies of this aren't exactly thin on the ground, but this was a nice example, and I've been wanting to try Greene for a while (I'm ashamed to admit I've never read any of his novels). I was either going to try this or The Quiet American (the 2002 film of which I love); apparently The Honorary Consul was one of Greene's own favourite books. Good a place as any to dip in, then.
Posted by Nick Jones (Louis XIV, the Sun King) at 04:53