NB: This post was written before I became aware of "export editions", which the copy of The Honourable Schoolboy discussed below may well be.

Yesterday, in my doubtless doomed quest to make errant booksellers see the error of their ways, I showed you two seemingly identical editions of Gavin Lyall's 1982 thriller The Conduct of Major Maxim. One of those was a genuine first edition; the other was a book club edition. The only indication of that was the absence of a price on the front dustjacket flap of the book club edition (i.e., no price was printed there, as opposed to it being price-clipped, with is a whole 'nother – if related – issue). As I stated yesterday (at length, tediously), book clubs (at least UK book clubs) don't print prices on their books because they sell books to their members at a reduced rate. It's that simple.

Sometimes – and hardbacks published by Hodder and Stoughton and Hutchinson in the 1970s and '80s seem to be the biggest offenders here – that's the only difference between a genuine first edition and a book club edition. And if the only books mistakenly listed as first editions on the likes of AbeBooks and Amazon were those where the sole variation from the genuine first edition was a missing price, I might (might) be inclined to feel more charitable towards the relevant booksellers. Unfortunately, that's emphatically not the case.

I've bought books online where if the dealer had bothered to check – looking under the jacket at the case spine, for example – it would've been apparent they were book club editions, with the letters "BCA" clearly readable. But of course said sellers either didn't check, or did check and didn't understand what they were looking at, or did check and knew the books were book club editions and decided to stiff some poor unsuspecting sod – i.e. me – anyway. So it's not as if merely a minor difference is being confused or overlooked; in a lot of cases – as we'll see shortly – there are blindingly obvious indicators.

Something I didn't address in yesterday's post, but which Book Glutton raised in the comments, was the question of what to do with the book club editions I end up with. Do I request a refund? Go to the hassle of sending them back? Or just dump them on a charity shop, buy a replacement copy and write a series of irritable blog posts on the subject instead? I find myself in something of a moral quandary here. Anyone who collects books knows that second hand bookshops have been experiencing tough times for a while, and when I paid so little for these books in the first place, it strikes me as a bit mean to be asking for my money back. There's also the fact that, appearances on this blog to the contrary, I'm not really by nature a vindictive or argumentative person. The idea of phoning or emailing someone and being irate with them is completely anathema to me. On the other hand, as I wrote yesterday, these imbeciles (what was that about not being irate?) evidently have no business selling books in the first place, and the world would perhaps be better off if they didn't.

Basically, I still haven't worked out what to do for the best, and the offending books are currently sitting in a plastic bag waiting to be dealt with in some fashion. (One could reasonably make an analogy here with my life in general.) But in the meantime, I can at least continue my crusade to head recidivistic dealers off at the pass, so to speak. Which brings me to the second of my show-and-tells: 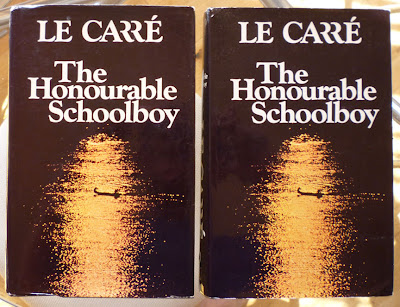 Here we have two copies of John le Carré's The Honourable Schoolboy, published in hardback by Hodder and Stoughton in 1977. This is the second in le Carré's 'Karla trilogy', following 1974's Tinker, Tailor, Soldier, Spy and preceding 1979's Smiley's People. As with yesterday's Lyalls, at this stage you wouldn't be able to tell them apart. And if we turn them over and look at the backs: 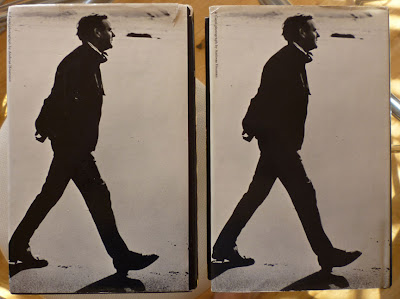 Again, no difference. If we open them up and take a look inside at the indicia: 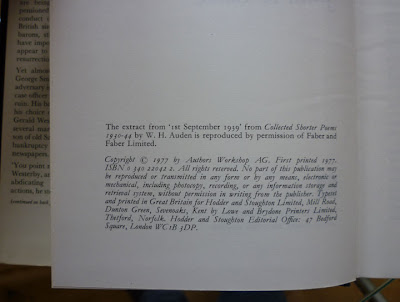 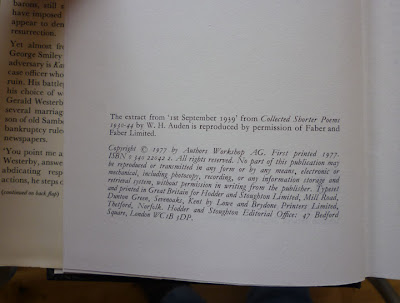 Once again, as with the two copies of The Conduct of Major Maxim, the copyright info in the two books is exactly the same. Now, I'm being slightly disingenuous here, because unlike those two Lyall books, with these two copies of The Honourable Schoolboy the alarm bells would be ringing before ever getting to the indicia (that's assuming you had to copies to compare, which, to be briefly fair once again to our wayward bookselling chums, a lot of them probably haven't – hence, of course, this and the previous post). Because as soon as you open the two books up, you notice a glaring difference: 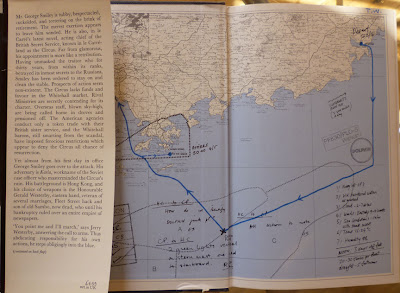 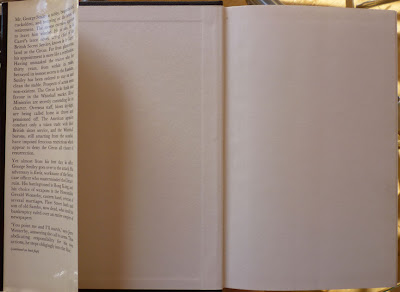 One of the books – the true first edition – has attractive, relevant-to-the-story printed endpapers, and the other book – the book club edition – doesn't. Now, it's worth mentioning here that when I received that blank endpaper copy in the post, I didn't at that point have the other copy to compare it to (I bought the true first later as a replacement... and in truth also, saddo that I am, so I could write these posts). Therefore I had no idea that a true first edition should have those map endpapers. But as with the Lyall book, there was another indicator. Look at the bottom corner of each dustjacket flap and you'll see that once again, the book club edition has no price printed. Even without another copy with which to compare it to, that lack of price is always – always – rock solid proof that a book is a book club edition, not a first edition*.

So there we have it. I'm absolutely positive that as a direct result of this and the previous post all those mis-listed and mis-priced books online and in bookshops will be immediately corrected, and that henceforth no bookseller shall ever again pass off a book club edition as a first edition. Lo, it is written.

Now then. Who wants to buy book club editions of The Conduct of Major Maxim and The Honourable Schoolboy?

*Or possibly an export edition. Ahem.
Posted by Nick Jones (Louis XIV, the Sun King) at 07:27