This one took a bloody age to turn up from the States, longer even than the length of time I was waiting for my first edition of Plunder Squad to arrive, which was delayed by the Icelandic volcano back in April. Still, it's here, and here it is: 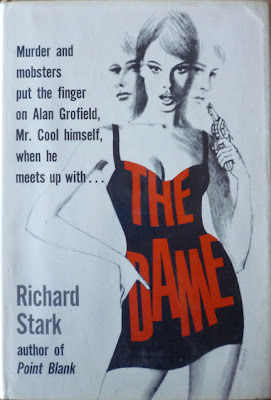 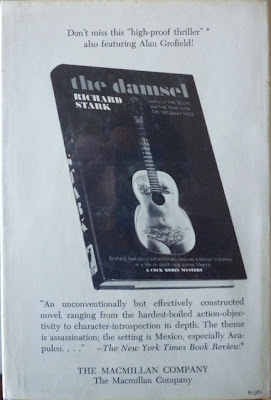 A US first edition hardback of The Dame by Richard Stark/Donald Westlake, published by The Macmillan Company in 1969 as part of their Cock Robin Mystery line, with a dustjacket designed (and illustrated) by Muni Lieblein. And it is a lovely jacket; this may well be my favourite jacket design of the four Alan Grofield novels, and ranks pretty high in the list of Richard Stark jackets too.

This is the second of Stark/Westlake's books to star actor/thief/Parker cohort Grofield, following on from 1967's The Damsel. Its non-arrival was in danger of holding up my progress with the Parker novels: my plan was to read all the Stark books, including the Grofield ones, in order, but I've had to press on whilst waiting for The Dame to arrive, and now I'm in the midst of The Sour Lemon Score (Parker #12, 1969). Really, in the fictional timeline of the Parker universe, The Dame should slot in around The Rare Coin Score (Parker #9, 1967), as the events of The Dame take place directly after the events of The Damsel (at the start of The Dame Grofield's just left the Mexican motel he's shacked up in with Ellie from that novel), which in turn takes place directly after The Handle (Parker #8, 1966). But no matter. I'm reading The Dame now, alongside The Sour Lemon Score, so I'll have finished it by the time I get to Slayground (Parker #14, 1971), which of course shares its first chapter with the next Grofield novel, The Blackbird (1969).

Confused? Tell me about it.

Anyway, The Dame proved the trickiest of the Grofield books to track down at an affordable price; there are a few Foul Play Press/Countryman paperbacks floating about on line for about £20, but other than that you're looking at US first editions upwards of £50, and all in the States. I couldn't find a single copy for sale online of the UK 1970 Hodder & Stoughton hardback first edition, so the US edition it had to be.

Intriguingly, Westlake's dedication in this book is a little different to his other books. Usually his dedications are to friends, family members or fellow writers. In The Dame, however, the dedication is to a fictional character – his own fictional character, in fact. It reads, simply, "to Parker". Of course, the first twelve Parker novels don't carry dedications at all, probably because they were originally published as cheap, mass-market paperbacks, and dedications are the kinds of things you see in more upmarket, prestigious hardbacks. It's a little-remarked-upon curiosity that the Parker novels didn't make it into hardback first editions until Random House picked up the rights with Deadly Edge in 1971, and yet the Grofield books were published in hardback right from the off in 1967.

So, with the arrival of The Dame, I now have all of the Grofield novels: 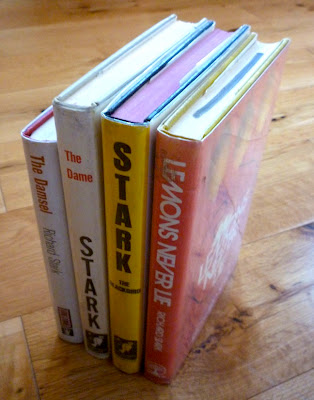 Which means it's time for a Grofield cover gallery!
Posted by Nick Jones (Louis XIV, the Sun King) at 06:18