Muchos gracias to Book Glutton for the heads-up on this one, my copy of which turned up over the weekend:

It's the UK hardback first edition of Justin Cronin's The Passage, published by Orion, ooh, just over a week ago. This is the first printing as well as the first edition (it's already up to a second printing), signed by the author: 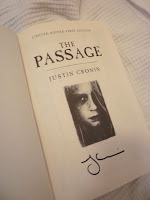 I'm already over 130 pages into it, and it's utterly absorbing. I guess it's closest in content to Stephen King's The Stand (possibly my favourite book of all time): it's a near-future end-of-the-world, good-versus-evil tale, with added vampires. I'm only in the opening stages at the moment, which focus on a young girl, Amy, who seems destined to save the world somehow, as well as on military experiments on death row inmates aimed at extending life and eradicating disease, which is where the vampire angle comes in. Cronin writes in a really pleasing, uncomplicated style, reminiscent of King but without King's occasional folksiness. He does use King's trick of foreshadowing events, which helps drive the narrative, and he's got King's knack (or rather prime King's knack; less so these days) for brilliantly drawn characters.

Aside from The Stand, something else it's reminding me of is Matt Wagner's epic Grendel comics, which also weaved vampires into an end-of-the-world scenario. I don't know if Cronin has read the Grendel cycle, but he does know his comic books by the looks of it: at one point in The Passage a death row inmate being transported by the military to be experimented on notices one of the soldiers reading comics, and asks if one of the characters is Aquaman. He's then given a few comics to read: X-Men, and League of Vengeance. That second title isn't a real one: The Passage is set around ten years hence, in an America where there have been further terrorist attacks and where, globally, the war on terror has engulfed Pakistan, Iran and others. In which context, Cronin's re-naming of Justice League of America (the actual comic where Aquaman appears today) as League of Vengeance makes sense. A little inside joke for comics fans there...?
Posted by Nick Jones (Louis XIV, the Sun King) at 07:17