Jiminy Cricket there's a feck of a lot of comics out again this week, at least ones of interest to me. Let's split 'em up into DC and Marvel (and a stray Image Comics one too):

So, from DC Comics/Vertigo, I count two definites and two maybes. The definites are Grant Morrison and Frazer Irving's Batman and Robin #13 and Judd Winick and Pablo Raimondi's Red Hood: Lost Days #2: the former 'cos it's Morrison writing Batman, and we know how fab that is; the latter 'cos it's Winick writing Red Hood, and when he writes this particular character (who, for the latecomers to class, is the former Robin – and former corpse – Jason Todd) it seems to be the only time he really comes alive. Winick, that is, although the character too. Don't know why that is, but it just is.

As for the other two comics above... I think I'll knock iZombie on the head with this third issue. I haven't minded the first two issues, but 'not minding' isn't the same as 'thoroughly enjoying', and in a week like this, where there's a fair bit of choice (not to mention the cost of comics these days), the comics that aren't pulling their weight tend to fall by the wayside. iZombie has nice art from Mike Allred, but the story isn't pulling me in, so we'll wave it goodbye. And that other Batman title is Batman Odyssey #1, which hails Neal Adams' return to the character he reinvigorated in the early '70s. I'm intrigued by it, but I dunno if it'll be any good or not. We'll see.

I might, actually, get all of these. Steve Rogers: Super Soldier #1 is the first in a miniseries (I think) from Ed Brubaker and Dale Eaglesham... about Steve Rogers, Super Soldier. I don't know any more than that. Which begs the question, what sodding use are these weekly List posts? I'll tell you what I do know, though: Steve Rogers is the former Captain America, and Brubaker's run on the main Captain America title has been pretty great (although the last few issues have tailed off a bit...), so I'll definitely check this out. Oh, and Eaglesham's a fascinating artist, nestling somewhere between Jack Kirby and Geof Darrow. Now there's a lovely image.

Scarlet #1 is Brian Michael Bendis and Alex Maleev's new creator-owned thingy, about a woman called... er... Scarlet...? Shit, we're not doing well with the info today. Although that's not entirely my fault. Marvel's comics solicitations are often rather opaque. Here's what they say about this one:

This is the comic experience of the year! The first creator owned series by one of the most successful teams in all of modern comics. Scarlet is the story of a woman pushed to the edge by all that is wrong with the world…A woman who decides to stand up and fight back…A woman who will not back down…A woman who discovers within herself the power to start a modern American revolution!! In the vein of Alias, Powers, and Jinx, Scarlet debuts a fascinating new comics character that, with every issue, reveals new things about herself against a completely original backdrop of intrigue and drama.

Nope, still none the bloody wiser. I particularly like the line about "a fascinating new comics character that, with every issue, reveals new things about herself..." Hmm... I don't think this Marvel copywriter knew a damn thing about the comic themselves. But writer Bendis and artist Maleev were responsible for a well-regarded run on Daredevil (although I preferred Brubaker and Lark's stint meself...), and I have high hopes that Bendis will rediscover some of his indie creative mojo with this one, after a few years of increasingly flabby superhero stuff.

And lastly from Marvel (for me, anyway), we have X-Men #1. Yes, yet another X-Men #1. How many first issues of X-Men have there been now? This one comes courtesy of writer Victor Gischler (and artist Paco Medina), and follows on directly from the same writer's Death of Dracula from last week... which I haven't read yet. Crap, better get a shift on and see if it's any good before I buy this. The storyline here is titled 'Mutants Versus Vampires'. Does what it says on the tin, one hopes. Gischler is probably better known for his hard-boiled crime novels, which I'd like to check out at some point. Sigh. Another writer to add to the list of authors I need to check out...

And lastly, that one from Image, which is, of course:

But! Before we go, here's something else on a comics tip I bought online recently, something I've been meaning to buy for a gosh darn age: 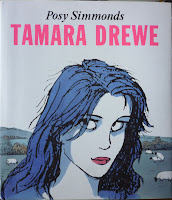 It's the 2007 first edition (and first printing) hardback of Posy Simmonds' Tamara Drewe, published by Jonathan Cape. I read this when it was originally serialized in the Guardian newspaper, and as a result never quite got around to buying the collected version. And then the hardcover went into further printings, and then it went into paperback, and what with my obsession with first editions it was getting less and less likely I'd pick one up, until finally, with Stephen Frears' reportedly rather good film adaptation on the way, I crumbled and found a first edition online. For those who don't know it, it's a tale of middle class lust and folly. Nobody documents the British middle classes as insightfully and scathingly as Simmonds – I saw her give a talk a few months ago where she quickly sketched a few middle class archetypes on an overhead projector, and she was utterly brilliant. As is this.
Posted by Nick Jones (Louis XIV, the Sun King) at 12:11