There's a tale lies behind this one. A terrifyingly dull, finicky tale, but a tale nonetheless. Here be the book in question:

A UK hardback first edition of William Boyd's Ordinary Thunderstorms, published by Bloomsbury in 2009. I've wanted to get hold of a copy of this ever since it was first published; Boyd is firmly in the 'literary' tradition, with a backlist embracing a fair number of historical fiction novels – basically the kind of thing I usually steer well clear of. But when I heard about Ordinary Thunderstorms, around the time of its publication, it sounded rather good: a thriller about a man falsely accused of murder and pursued by both the police and the real killer. I was undergoing a burgeoning interest in mid- to late-twentieth century thrillers at the time – still am – and this seemed like a contemporary take on the genre, except with a little more depth than a lot of what passes for thrillers these days (stand up, Dan Brown et al). In particular, I was intrigued by the notion of a section in the book where the 'hero' hides out on traffic roundabout.

So I figured I'd get meself a copy and give it a go. Except, being the tiresome nerd that I am, I wanted to get a true first edition – in other words, a first printing of the hardback. I checked out the bookshops round this way, but all anyone seemed to have were trade paperbacks – those larger format softcovers that publishers sometimes release to the trade in lieu of a hardback. I had a look up in London too, but still no joy. I knew first edition hardbacks did exist – I'd seen them listed online, but they only seemed to be signed first editions for exorbitant prices. The Firsts in Print website had some of those, but I wasn't about to pay forty quid for a new hardback. That same website also stated that the hardback was only printed in tiny quantities, for libraries and for the signed edition.

Amazon's listing for the hardback said it was out of stock, but that more were due soon. But I had a feeling those would be reprints, and sure enough the hardback's now been through at least four printings. So I did what any slightly insane and obsessive book collector would do: I decided the book was probably crap anyway and gave up. And then the other day I decided to have another look online, just on the offchance, and on Amazon found a listing from a seller for a first edition hardback, for a tenner. Probably not a true first, I reasoned, but might as well drop them a line and see if it has the full strike-off line. See, it's all about that line of numbers on the indicia page; if a book has a full set from 1 to 10, it's a first printing.

The seller got back to me, said they'd have a look at the book... and then ten minutes later they emailed again and told me that yes, it did have the full number line. And it does: 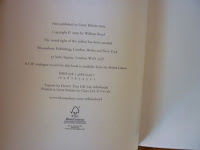 So there you go. Success, finally. A true first edition of William Boyd's Ordinary Thunderstorms, good as new, bought for a quarter of what it would've set me back originally. Sometimes it pays to wait.

Told you it was a terrifyingly dull, finicky tale. Don't say you weren't warned.

'Course, what'll happen now is I'll read the book and discover it really is crap after all.
Posted by Nick Jones (Louis XIV, the Sun King) at 05:36