Continuing the showcase of the books I bought at Ann Green Secondhand Books in Halesworth during our (as in, my, Rachel and little Edie's) Suffolk summer holiday, we have this: 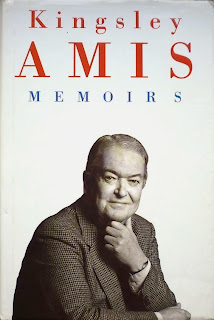 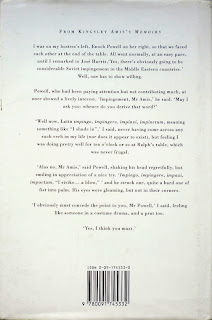 A 1991 Hutchinson first edition of Memoirs by Kingsley Amis, jacket design by the Senate, photograph of Amis by Lord Snowdon. Regular readers of this blog – of which there must be at least four or five by now – will know of my enthusiasm for a good many of Amis's novels, in particular The Anti-Death League, The Green Man and Ending Up, but I'm just as happy to read his non-fiction. His Memoirs are unusual in their structure, consisting, as Amis puts it in his introduction:

...not of a connected narrative but of a series of essays or sketches. Most of them are about individuals I have known more or less well. Most of the others are about self-contained episodes of my life, like my time in the army or my trip to Prague in 1966, though here again I have tried to focus on others rather than myself. I have done so not out of self-effacement but for several other reasons. Most writers lead dull lives whether or not those lives may be fun to lead, and are likely to be boring to read about in any detail. Writing directly about my own would anyway not appeal to me, even if I had a good memory for that kind of thing and had kept diaries with any persistence.

Even so, Amis goes on to admit that:

...there is probably quite enough about me in these pages, more than I intended or realise. And I have already written an account of myself in twenty or more volumes, most of them called novels. Novels they full are, too, and those who know both them and me will also know that they are firmly unautobiographical, but at the same time every word of them inevitably says something about the kind of person I am. 'In vino veritas – I don't know,' Anthony Powell once said to me, 'but in scribendo veritas – a certainty.' 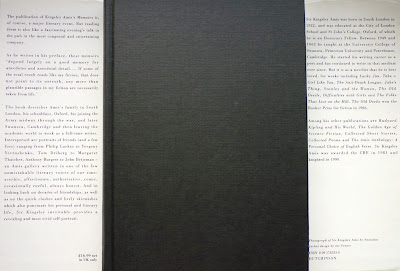 All of which means that the Memoirs probably don't contain the episode where Amis fell down drunk in a ditch outside Anthony Price's house. Shame. On the plus side, however, there is this: 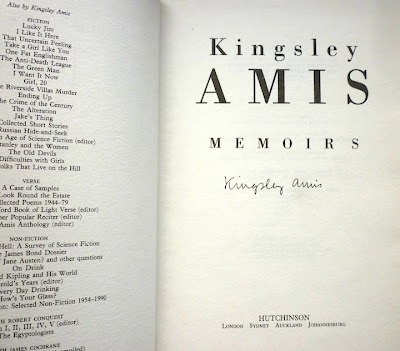 This copy is signed by Amis. Huzzah.

Amis mentions Anthony Powell above, and devotes a chapter of his Memoirs to his friend and fellow writer – and quite by chance Powell is the author of the third and final book I found in Ann Green Secondhand Books, actually during my second visit to the place (I missed it the first time round): a highly scarce volume of Powell's celebrated A Dance to the Music of Time sequence... 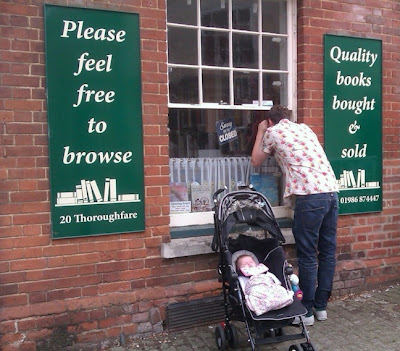