As we reach the end of the first week of posts about my – and Rachel and little Edie's – recent holiday to Suffolk, and with a second and possibly even (heaven forfend) a third week of such posts in prospect, it occurs to me in passing that I may be trying the patience of even the most ardent and steadfast of Existential Ennui readers with this absurdly self-indulgent endeavour, which, if the missives thus far are anything to go by, and the odd book-focused interlude aside, will continue to consist largely of a succession of pictures of me and a supposedly cute baby in front of a variety of secondhand bookshops in whichever godforsaken Suffolk town or village I've dragged Rachel and Edie to on the pretence of it being picturesque. 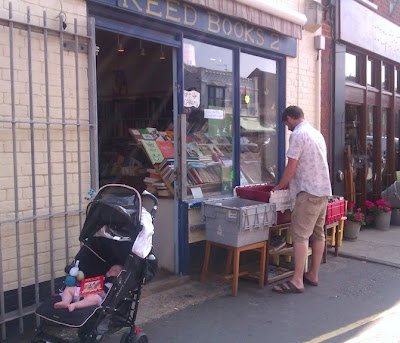 So then. Where were we? Halesworth, that's where, the base location for the week's holiday, from which locale we ranged far and wide over the eastern bit of Suffolk, in the first instance to the seaside town of Southwold, where, sadly, there are no secondhand bookshops (although my good friend and colleague Roly Allen, who's very familiar with the area, assures me there used to be about four), and then to the similarly coastal but not quite as quaint Aldeburgh, where there is a single secondhand bookshop: 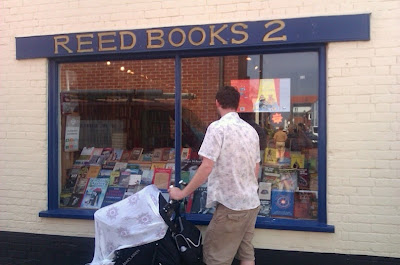 Reed Books 2. Apparently there was at one point a Reed Books 1, but it didn't seem to exist by the time we got there – a shame, because while Edie nabbed herself a Noddy in Reed Books 2 (the first book in the series, Noddy Goes to Toyland), there wasn't anything for me, and I suspect most serious secondhand book collectors would struggle to find much of interest either. Unlike the next bookshop we ventured to: 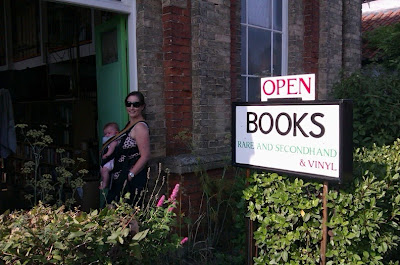 Chapel Books, in the little village of Westleton, about six miles north of Aldeburgh. As the shop's name suggests, it's based in an old chapel, with shelves arranged in a pleasingly haphazard fashion around the hall, and the occasional charming offer of tea from the proprietor (although it was a bit too hot the day we were there to take him up on it). Even though there was only a small crime fiction section, tucked away in the far corner, there was still plenty for both me and Edie to look at: 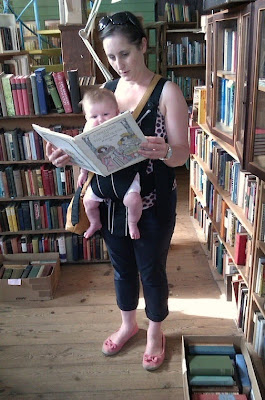 Lots of children's books, evidently, but also a good range of non-fiction, vintage paperbacks, science fiction, and a decent holding of modern firsts. I eventually emerged with three books: 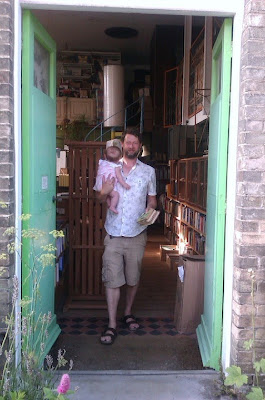 Er, and a baby (Edie, in case there's any confusion). One of those books will form the basis of the next post, but the other two were: 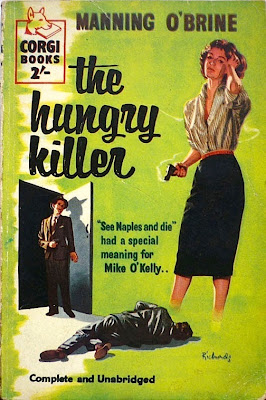 A first Corgi paperback printing of Manning O'Brine's The Hungry Killer, published in 1956 (the same year as the Hammond hardback edition), cover art by John Richards (who also did the cover art for my 1955 Corgi paperback of Ray Bradbury's The Illustrated Man), and: 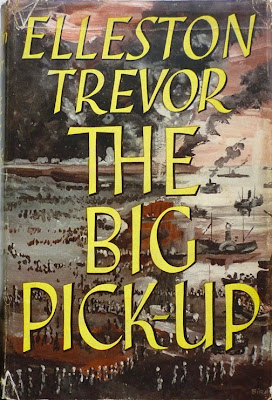 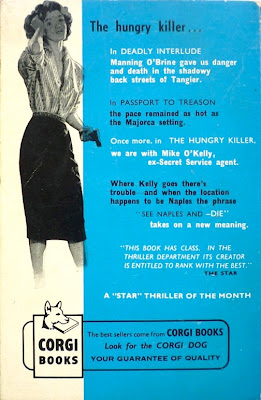 O'Brine has been on my radar for a while now – indeed I have a first edition of his 1970 novel Crambo, the second in his three-book Mills espionage series, waiting to be blogged about. The Hungry Killer is part of an earlier, longer spy series starring Michael The O'Kelly – the fifth book in the series in fact, and notably scarce: there are only three copies in any edition on AbeBooks at present, none of them the Corgi paperback. 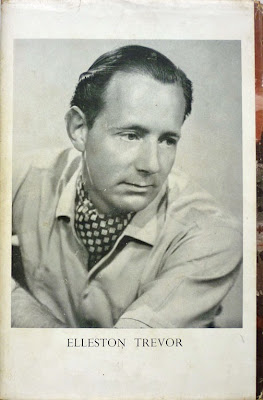 Trevor, on the other hand, is probably better known round these here parts under another of his aliases: Adam Hall, author of the nineteen Quiller spy novels (and one standalone thriller). However, The Big Pick-Up isn't an espionage work: like another Trevor novel I blogged about back in 2011 (The Killing Ground, 1956), it's a World War II tale, in this instance set during the Dunkirk evacuation; there's a review of it over at the Broken Trails blog. 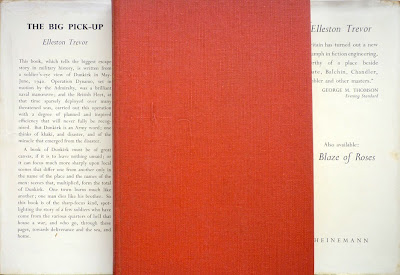 Jacket designer Val Biro I've written about numerous times, and his wrapper for The Big Pick-Up is another cracker, that big, bold but elegant hand-lettering standing in marked contrast to the freely daubed gouache paint behind. Needless to say, it's now taken its place in my Beautiful British Book Jacket Design of the 1960s and 1960s gallery, alongside eleven other fine examples of Val's work (and taking the number of covers on the page up to a remarkable 111).

As for the third book I bought, and why it's special enough to warrant its own post: all will be revealed soon. 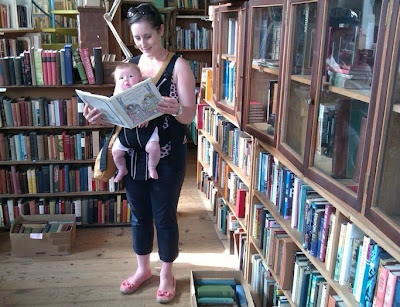