A Dance to the Music of Time by Anthony Powell (Heinemann, 1962; a Halesworth, Suffolk Score), plus Kingsley Amis on Powell

The third and final book I bought at Ann Green Secondhand Books in Halesworth – not including little Edie's books; she came away with a good three or four herself – I didn't actually spot until our last full day staying in the Suffolk town, when during an amble down the Thoroughfare I decided on a whim to pop back into the shop. And noticed this: 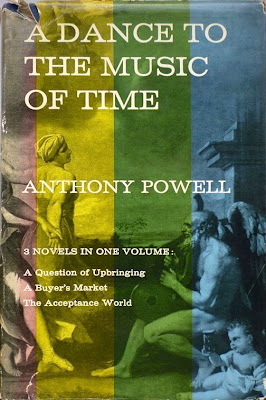 A Dance to the Music of Time by Anthony Powell. Published by Heinemann in 1962, it's the first British omnibus edition of the initial three books in Powell's twelve-volume (as it would eventually number) A Dance to the Music of Time sequence – A Question of Upbringing (originally 1951), A Buyer's Market (1952) and The Acceptance World (1955) – and is really rather uncommon in this edition: there are just two copies on AbeBooks at present, both jacketless, both offered by American sellers, priced at £35–£60. Whereas this copy does have its dust jacket (albeit a little chipped and sunned at the spine) and set me back just eight quid. 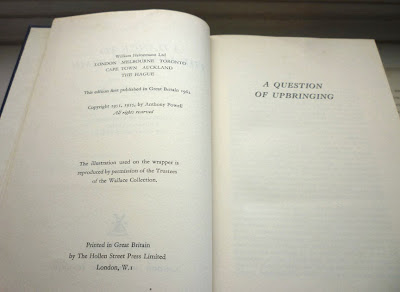 According to one of those American AbeBooks sellers the Heinemann omnibus was "Published in an edition of 3,000 copies, on Dec.3, 1962, eleven months after the US [Little, Brown] 3-in-one. Powell credits the US omnibus volume with the commercial success of the Dance. The British omni, however, never took off and this is the only one published by Heinemann." That's as maybe, but my research suggests it did well enough for Heinemann for them to issue a reprint in 1964. Still, it's a scarce volume, and one to treasure. 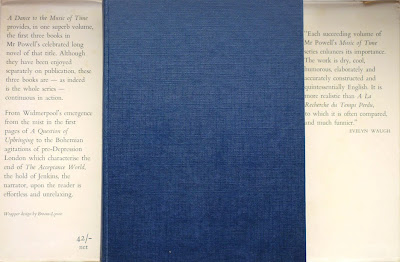 The little-seen dust jacket was designed by James Broom-Lynne, who designed all twelve of the wrappers of the original Heinemann editions of the Music of Time novels (among many others, including Adam Diment's The Dolly Dolly Spy, to take an example from my own book collection), and utilises Poussin's 1634–1636 painting A Dance to the Music of Time – from which Powell got his overarching title. It's an attractive treatment, and certainly good enough to take its place in my Beautiful British Book Jacket Design of the 1950s and 1960s gallery. 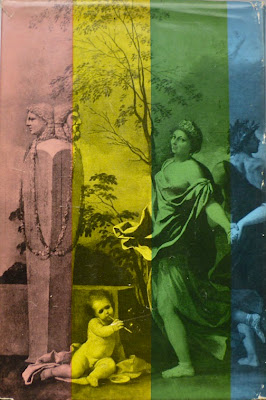 I've been meaning to try Powell's Music of Time sequence ever since I learned that Donald E. Westlake was a fan – as indeed are Westlake aficionados Ethan Iverson and Levi Stahl, not to mention the author of the previous Ann Green Secondhand Books score, Kingsley Amis, who was friends with Powell and who devotes a chapter to his fellow author in his Memoirs (1991). Amis states that the first Powell novel he read was the author's third, From a View to a Death (1933), in 1941 or '42, and "immediately recognised a talent and a way of looking at the world that were utterly congenial to me, even though the bit of the world being looked at, with its butlers, country houses, etc., was quite outside my experiences". He calls the Music of Time sequence "a great roman-fleuve" and makes note of "the individual volumes being like novels, each with a distinguishable theme or subject – entering the adult world, marriage, the coming of war, etc. – while the sequence as a whole was more like life, in a way more realistic, than its components, with for instance characters such as the painter Barnaby coming and going haphazardly". Unfortunately, despite being an evident admirer of the sequence, Amis also inadvertently soured himself on the novels:

When the Music of Time sequence was complete in 1975, with Hearing Secret Harmonies, I wrote and read a huge lecture... on the thing as a whole. Putting it together involved, of course, slow and careful reading of each volume and the taking of copious notes. This had the distressing side-effect on me of making the books unrereadable, so far at any rate, though I mean to return to the charge in the not-too-distant future. I ought to have foreseen this, having published a short book on the works of Ian Fleming, The James Bond Dossier, in 1965, with a roughly comparable amount of work required and the same lasting result. But most people will think this a less lamentable deprivation.

That sly last line made me smile, but I wonder if Amis, who died in 1995, ever did revisit the sequence. 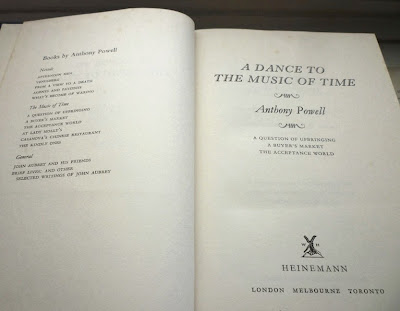 Anyway: that was the last of the books I bought in Halesworth. Next in this prolonged account of mine and Edie and Rachel's summer holidays we'll be heading to the seaside, and thereafter, slightly incongruously, to church. 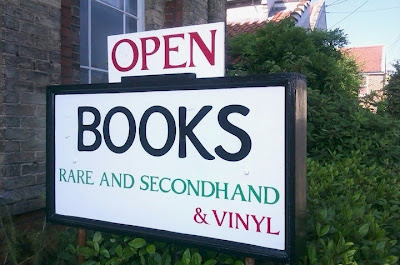