Keep 'em peeled for that promised post on a special edition of the final novel by Peter George, co-writer of Stanley Kubrick's Dr. Strangelove, but in the meantime, and continuing the quest to get the total number of covers on the Beautiful British Book Jacket Design of the 1950s and 1960s page up to 100 (currently it stands at 95), here's a book I bought at the last-but-one Lewes Book Fair, and which I also own in a paperback edition – the contents of which differ slightly from the hardback – purchased at last year's London Paperback and Pulp Bookfair: 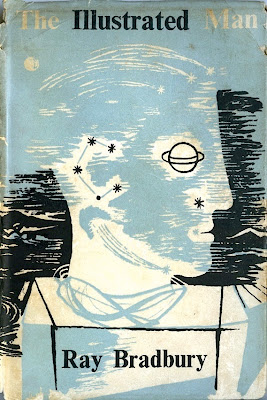 The Illustrated Man, a collection of short stories by Ray Bradbury, first published in the UK by Rupert Hart-Davis in 1952. This is actually the third impression of the British first edition, dating from 1958, but since I only paid seven quid for it, and jacketed second or third impressions start at around the £50 mark online, I'm not complaining. That wrapper was designed by John Minton, a very well known painter and illustrator linked with the twentieth century British Neo-Romantic movement (a school of art I'm quite keen on myself), and a number of whose works are held by the Tate, the British Council, and now, of course, by that similarly venerable institution, the Existential Ennui Beautiful British Book Jacket Design of the 1950s and 1960s gallery. Ahem. 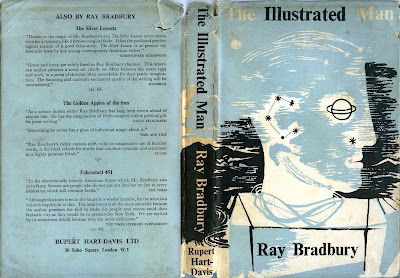 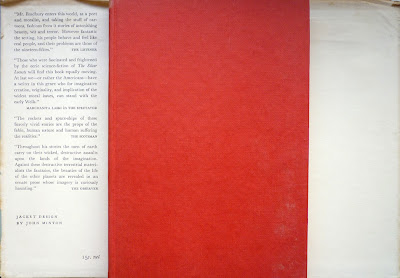 I was already pretty familiar with most of the stories in The Illustrated Man, having read them in various other Ray Bradbury anthologies over the years, but reading them again gathered together like this was quite instructive. For one thing, this time around I discovered new layers to some of them, such as "Kaleidoscope", which became less of a terrifying tale of being cast adrift in space and more of a meditation on mortality, regret and the importance of living life to the full. For another, I was struck by how Mars-centric many of the stories herein are. A number of them could have quite easily fitted into The Martian Chronicles – or The Silver Locusts, to give it its British title – Bradbury's second book, published just prior to The Illustrated Man – and indeed one of them originally did. Which brings me neatly to that other edition of The Illustrated Man: 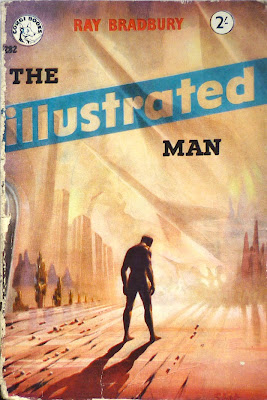 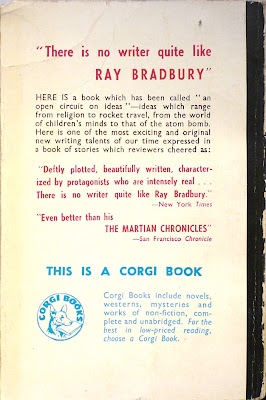 The first British paperback edition, published by Corgi/Transworld in 1955 under a cover by John Richards. This version of the book was evidently printed using the US Bantam plates; not only is it set in American English – i.e. US spelling – but it contains eighteen stories, as opposed to the Hart-Davis hardback, which only contains sixteen: 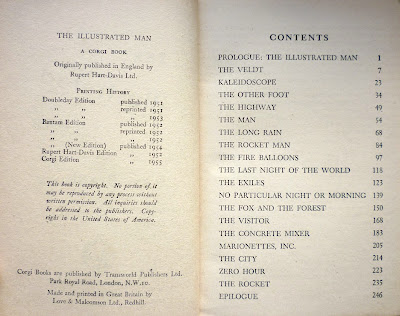 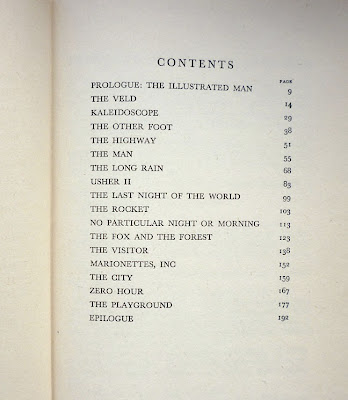 Eighteen Illustrations, eighteen tales. I counted them one by one.

Sixteen Illustration, sixteen tales. I counted them one by one.

So now you know.

So that was the 96th addition to Beautiful British Book Jackets – and as it turns out the 97th addition was also bought in Lewes; just last week, in fact, in one of this fair East Sussex town's many charity shops. And what's more, it may well have been the best Lewes Book Bargain yet...
Posted by Nick Jones (Louis XIV, the Sun King) at 10:31