Let's return to the signed editions again (after a Richard Stark cover gallery) with a book which is among my most prized signed novels – up there with the signed US first edition of P. M. Hubbard's A Thirsty Evil (with its accompanying letter – and not forgetting that special copy of the UK first as well); the signed and inscribed (to Byrne Fone) UK first of Donald E. Westlake's debut novel, The Mercenaries; the signed and inscribed (to his friends) UK firsts of Gavin Lyall's Blame the Dead and Spy's Honour (and a signed Lyall letter, too); and those signed and inscribed (to me!) UK and US firsts of Anthony Price's The Labyrinth Makers, The Alamut Ambush and Our Man in Camelot. (Phew.) All of those books share in common personal inscriptions from their authors, an attribute that, to my mind, makes them more interesting, and therefore more special, than just a regular signed edition, and such is also the case with this book: 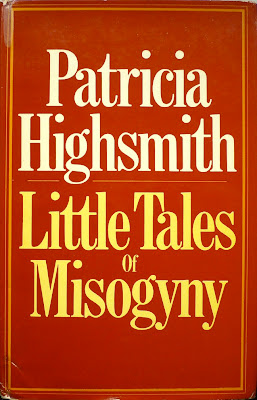 A British first edition of Patricia Highsmith's Little Tales of Misogyny, published by Heinemann in 1977. It's a collection of (very) short, amusing, dark and disturbing stories in which a procession of women meet sticky ends at the hands of of a variety of men and, indeed, themselves. It's all deliciously, delightfully evil, and Olman posted a pithy review of it a couple of years ago (and there's a longer one by Cory Pung here which is also worth a read). 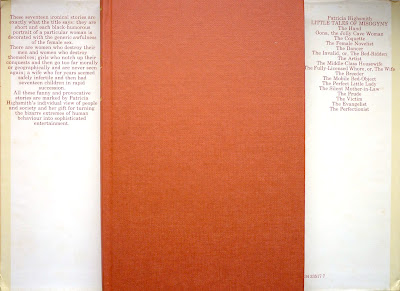 I saw this particular copy on AbeBooks (having already bought the same edition previously in Much Ado Books in Alfriston a few years ago; I know, I know... there's a long and complicated story surrounding why I went looking for another copy – I was actually looking for signed Highsmith novels in general having been stiffed on eBay – but I shan't bore you with the details), and the listing caught my eye. It stated that there was an inscription inside the book, but it was a little uncertain if said inscription was by Patricia Highsmith or not. I asked a question or two of the seller, and then decided to take a punt, as it was only a fiver. Turns out that it was indeed inscribed by Highsmith, and also boasts a little drawing (demonstrating a smidgeon of the talent she must have at one time deployed as a comics creator): 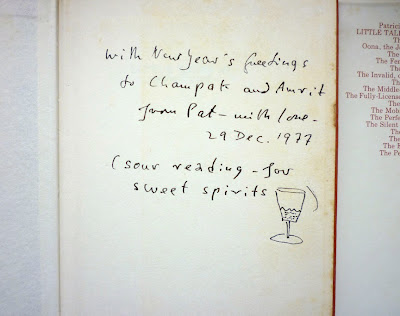 Who Champak and Amrit are/were I haven't been able to determine; I checked my copy of Andrew Wilson's 2003 biography of Highsmith, Beautiful Shadow, but to no avail, and I don't have Joan Schenkar's more recent biog; if anyone reading this does, and is willing to have a butcher's at its index, let me know if you have any luck.

Patricia Highsmith is, as I've stated more than once, one of my favourite authors – especially her five Tom Ripley novels (see here for a graph representing my appreciation of them) – so to own an evidently fondly inscribed (and illustrated!) book like this one is quite a thrill. There are roughly eighty or so signed Highsmith editions listed on AbeBooks, but many of those are the limited-to-250-copies editions produced by Otto Penzler's Mysterious Books in the late-1970s and 1980s – a 1986 American edition of Little Tales of Misogyny among them. Prior to that Highsmith did sign the odd book, but not too many, and this is the only non-Penzler signed copy of Little Tales of Misogyny I've seen. Not bad for five quid, then. 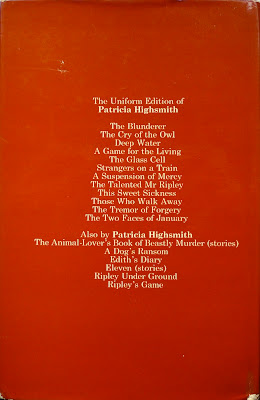 And I'll be staying with Highsmith for the next few posts, with some intriguing editions of a couple of the Ripley books I've come into possession of, and some thoughts thereon...
Posted by Nick Jones (Louis XIV, the Sun King) at 07:27