I'll have further signed editions (and some original artwork) soon enough, but I've been promising for a while now (perhaps 'threatening' is more accurate) that I'd be returning to Patricia Highsmith's Tom Ripley novels at some point. And having posted that signed, inscribed edition of Highsmith's Little Tales of Misogyny last week, and having acquired some intriguing editions of the Ripley books, I've finally been inspired to embark on the Great Tom Ripley Reread.

I'll be looking at each of the five Tom Ripley novels in turn (with some non-Ripley posts in-between, I expect), although these missives won't, strictly speaking, be reviews; there are probably quite enough of those online as it is, and my love for the books is such that I'm not especially minded to offer a robust critique. Instead, I'll be sharing some random thoughts, on how Tom comes across on this second (or third or fourth in some cases) go through the books; how he changes; how he stays the same; how the stories work as a whole, and so forth – the aim being to inspire a little debate: I'm as interested in hearing what you make of the Ripley novels as I am in prolixly pontificating about them myself (more so, in fact – which makes a change).

For the record, the five novels featuring Tom Ripley are:

If you haven't read them yet, well, now's as good a time as any: they're all very good, and a few of them are quite remarkable (as outlined in this post). And let's begin – where else – at the beginning, with a recent eBay win: 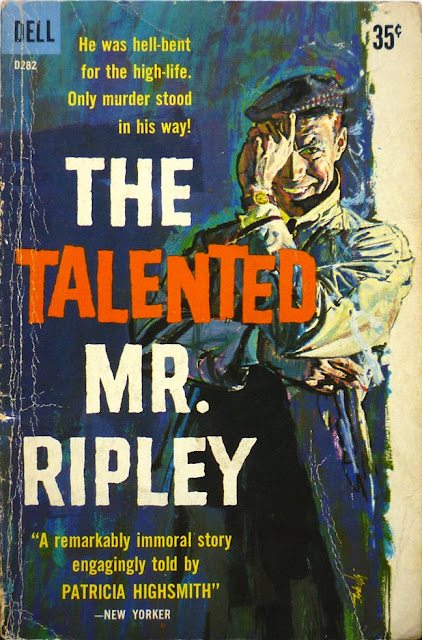 Namely the first American paperback edition of The Talented Mr. Ripley, published by Dell in 1959, which I bagged for a very reasonable amount. Proper first editions of Highsmith's fourth novel – as in the Coward-McCann and Cresset Press US and UK hardbacks – go for many hundreds, if not thousands, of pounds these days, so early paperbacks are about the best I can do in terms of collecting; I already own the first British paperback edition, published by Pan in 1960, which you can see below. And actually I think I prefer David Tayler's more restrained cover art for the Pan edition to William Teodecki's art for the Dell paperback; Teodecki's is a terrific painting, to be sure, but anyone who knows anything about Tom Ripley will surely agree that the leering, evil-looking fellow on the Dell cover isn't really an accurate portrait of our admittedly (multiple) murderous, conscienceless non-hero. 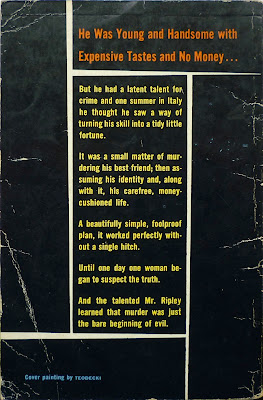 The first time I read The Talented Mr. Ripley I hadn't read all four of its sequels, so reading it again this time around was quite instructive. Highsmith didn't have sequels in mind when she wrote Talented, but she was fairly scrupulous in ensuring that the Tom of the later books was in keeping with the Tom of Talented – older, wiser, more settled, more sure of himself, but still the same man. Throughout the series Tom exhibits an attraction to the criminal underworld, something which is established right at the start of Talented, where Tom is engaged in an IRS scam. But there are other examples scattered throughout the book; one episode sees Tom taking Dickie Greenleaf, the idle, well-off fellow American he's come to Italy to befriend in order to convince him to return home – and who he will, in due course, murder – to see an Italian criminal, Carlo, in order to convince Dickie to join him in a bizarre drug-smuggling scheme (a scheme Highsmith later revealed was originally to have formed the basis of the main plot). Dickie is sneering and dismissive of Carlo, an attitude which infuriates Tom, who finds the Italian's reserve and strength of character fascinating.

The encounter with Carlo is important for other reasons too: it is the catalyst for Tom's eventual decision to kill Dickie – although the slightly earlier scene where Dickie catches Tom in Dickie's clothes is also significant – and it neatly encapsulates Tom's attitude towards people in general. In one long paragraph Highsmith details Tom's awful realisation that Dickie is not who he thought he was, and also sets up the tone and tenor of Tom's relationships and friendships to come:

He stared at Dickie's blue eyes that were still frowning, the sun-bleached eyebrows white and the eyes themselves shining and empty, nothing but little pieces of blue jelly with a black dot in them, meaningless, without relation to him. You were supposed to see the soul through the eyes, to see love through the eyes, the one place you could look at another human being and see what really went on inside, and in Dickie's eyes Tom saw nothing more now than he would have seen if he had looked at the hard, bloodless surface of a mirror. Tom felt a painful wrench in his breast, and he covered his face with his hands. It was as if Dickie had been suddenly snatched away from him. They were not friends. They didn't know each other. It struck Tom like a horrible truth, true for all time, true for the people he had known in the past and for those he would know in the future: each had stood and would stand before him, and he would know time and time again that he would never know them... 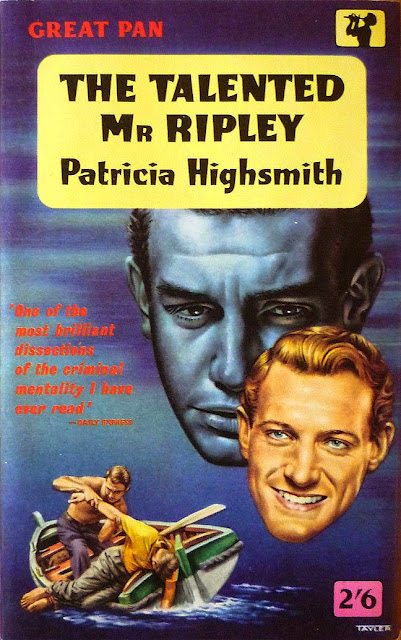 I wonder sometimes what would have become of Tom had Dickie reciprocated his love – because it's evident that Tom does love Dickie, in his own way. Would the flowering of and embracing of his sexuality have eased his anxieties? Would he have found an empathy for humanity? Would it have prevented him from becoming a murderer? Somehow, I doubt it. For one thing, it's hard to imagine vain, self-centred Dickie settling down with Tom for good. But more that that, Tom himself is just too removed from his fellow man. There's a lot of truth in the line Tom trots out for his friends in New York about not being able to make his mind up whether he likes men or women, so he's thinking of giving them both up: as he reflects after Dickie finds him in Dickie's clothes, "As people went, he [Tom] was one of the most innocent and clean-minded he had ever known. That was the irony of this situation with Dickie."

In fact Tom is more in love with the idea of Dickie, which is partly why he makes the leap to trying to become him – the other reason being Dickie's easy lifestyle, which Tom covets, having never had the funds himself to pursue the way of life he'd like to pursue. Late in the book, once he has money, Tom ruminates on the possessions – how they "gave a man self-respect" and "reminded him that he existed, and made him enjoy his existence" – and the security that wealth brings; how being well-off would allow him "to collect Etruscan pottery if he wanted to... to read his Malraux tonight as late as he pleased, because he did not have a job to go to in the morning". This is the comfortable lifestyle – in particular a comfortable European lifestyle – which he desires in Talented, and it is the lifestyle he has managed to attain for himself by the later books, and which he will go to any lengths to protect. 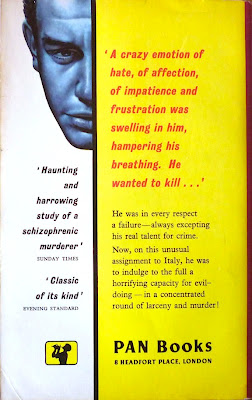 Another facet of Tom's makeup established in Talented, one which again will play a big part in the sequels, is his aptitude for forgery and impersonation. He assumes Dickie's identity, forges his signature, and even, in an effort to look more like Dickie, tries out (but eventually discards) pencil on his eyebrows and putty at the end of his nose – a theatrical touch that foreshadows elements of the first sequel, Ripley Under Ground. 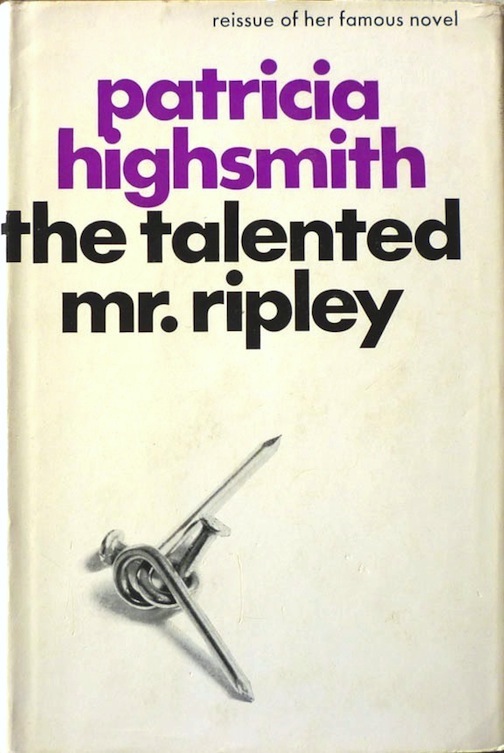 And then there's the trait, or rather the ability, or perhaps the proclivity, both for the act itself and for getting away with it, which earns Tom his longed-for way of life, and which he is forced to resort to again and again as the series progresses: murder. Dickie's murder, and to a lesser degree Freddie's, in all their horrific mundanity, define Tom, something that he himself comes to understand late in Talented. He can protest that he "hadn't wanted" to kill, that he "didn't want to be a murderer", that "he could absolutely forget that he had murdered" – but a murderer is what he is. The Talented Mr. Ripley could not have existed without murder, and therefore Tom could not have existed, and therefore the series as a whole could not have existed. Murder haunts the sequels, even in those Ripley novels where there's virtually no killing – the next book I'll be looking at, Ripley Under Ground, being a case in point...
Posted by Nick Jones (Louis XIV, the Sun King) at 09:02