New Beautiful British Book Covers: Most Unnatural Murder by Fiona Sinclair; A Spy in the Hand by Henry Talbot; Death in the Lebanon by John Tyndall

Time, I think, for some more Beautiful British Book Jacket Design. The addition of Victor Reinganum's wrapper for John Wain's Nuncle and Other Stories to the BBBJD gallery on Friday brought the number of dust jackets on the page up to 87, which, let's face it, is no kind of number to leave the total at. So I've now added a further three jackets to take it up to 90 – getting ever closer to the magic 100 – all of which wrap books I bought on a visit to secondhand bookshop Dim and Distant in Heathfield, East Sussex, and all of which were created by designers already represented in the gallery. Let's take a look at 'em in order of publication, shall we? 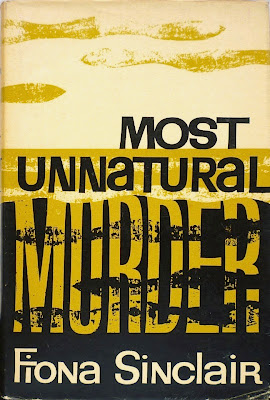 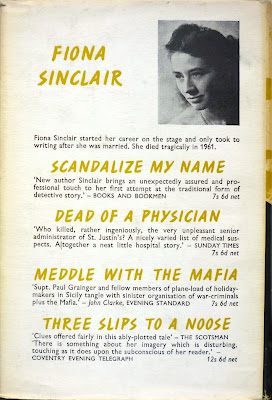 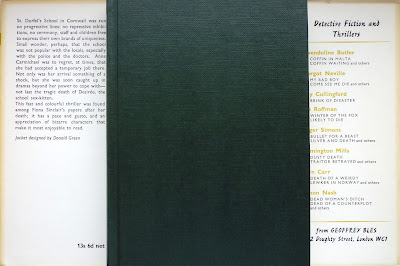 Most Unnatural Murder by Fiona Sinclair, published by Geoffrey Bles in 1965. The dust jacket on this one was designed by Donald Green, and to my mind it's every bit as good as his distinctive wrappers for C. S. Forester's The General, Pat Frank's Alas, Babylon and P. M. Hubbard's The Tower. For her part, Sinclair is an overlooked but intriguing author: she wrote a series of crime novels starring Superintendent Paul Grainger and one or two standalone works – Most Unnatural Murder being one. Many of her books were published posthumously, Sinclair having died at a fairly young age in 1961; Most Unnatural Murder was apparently found among her papers after her death. 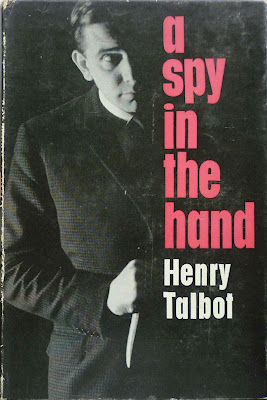 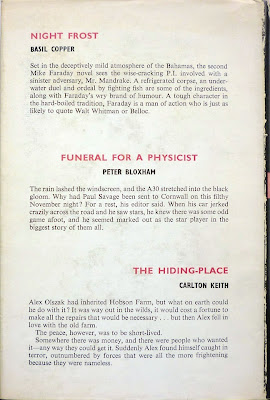 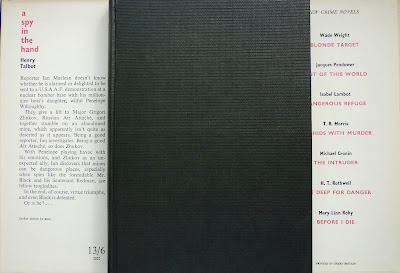 A Spy in the Hand by Henry Talbot, published by Robert Hale in 1966. There aren't many photographic covers in the Beautiful British Book Jackets gallery, but this one is worth including, I think, for a couple of reasons: it's nicely balanced – typographically simple but effective – and it was put together by a designer of whom I'm a great admirer and who's much better known for his illustrative covers: Val Biro. I was surprised when I saw Val's name listed as jacket designer on the front flap, but I've since discovered that he designed other photographic wrappers besides this one; David Schutte, Val's agent, thinks that possibly the photographs were supplied by the publisher and Val simply arranged the typography, but I must admit the other covers I've seen are quite similar, so I wonder if Val did in fact take the photos himself.

The author of this one, Henry Talbot, is even more obscure than Fiona Sinclair. There's very little information about him online and A Spy in the Hand is, I believe, his only novel under that name, but as Henry Talbot Rothwell and H. T. Rothwell he seems to have written a handful of other espionage thrillers for Hale in the mid- to late-1960s, including Exit a Spy (1966), Duet for Three Spies (1967) and No Honour Amongst Spies (1969). Of course, I might have got my wires crossed there, so do let me know if you happen have any further information on Talbot/Rothwell. 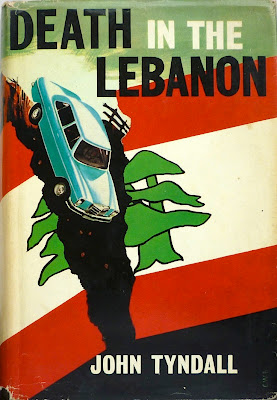 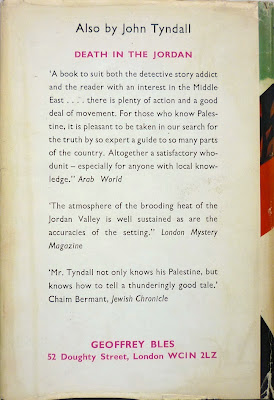 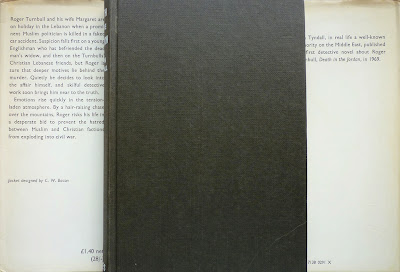 Death in the Lebanon by John Tyndall, published by Geoffrey Bles. Now, this one actually dates from 1971, which should, by all rights, put it beyond the remit of Beautiful British Book Jacket Design of the 1950s and 1960s. But its dust jacket was designed by Cecil Walter Bacon, who I wrote about in this post on P. M. Hubbard's Cold Waters, and whose work, I'd suggest, owes more to the approach to dust jacket design in the '50s and '60s than it does to that of the '70s. Plus Bacon's wrapper for Death in the Lebanon is a splendid piece of design and illustration, and it's my gallery and I'll include it if I want to, so ner.

As for the author of Death in the Lebanon, John Tyndall, again there's practically nothing about him online. He seems to have written just two novels – this one and Death in the Jordan (1970), which also stars the lead of Death in the Lebanon, detective Roger Turnbull. However, there is quite a famous John Tydnall – the onetime leader of the National Front and founder of the British National Party – and on his Wikipedia page Death in the Lebanon is listed as one of his published works. Of course, Wikipedia isn't always the most reliable of resources, so that could just be a mistake – and as commenter C points out below, it seems fairly unlikely. But if anyone can confirm or deny one way or the other, do please drop me a line or leave a comment.

Anyway, I'm aiming to get the Beautiful British Book Jacket gallery up to 100 covers over the course of the next month or so, so stay tuned for further additions. But I've some book covers of a different order lined up for the next post: a gallery of the British paperback first edition covers for Donald "Richard Stark" Westlake's Parker crime novels in the late-1960s...
Posted by Nick Jones (Louis XIV, the Sun King) at 06:08