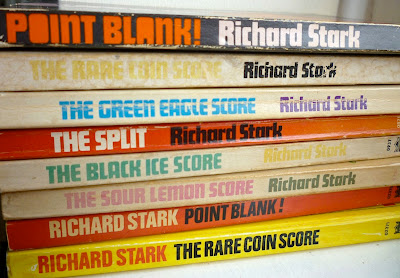 Right then. There'll be another signed edition along soon enough, this one bearing a lovely personal inscription – and even a little drawing – from one of my favourite authors. But before we get to that, last week I posted a Westlake Score – a 1969 Hodder Fawcett/Coronet paperback of Donald "Richard Stark" Westlake's Parker novel The Sour Lemon Score – which, for me, completed a run of British first editions of the Parkers – i.e. those editions Coronet published in the UK in the late-1960s before switching to the "bullet hole" style of cover design. And since I now have all of those – plus a couple of reprints – I reckon it's time for a Parker/Coronet cover gallery.

I'm arranging the covers in order of original publication (a publication order which did, in fact, follow Coronet's American counterpart company Fawcett/Gold Medal's order), even though that means The Split breaks up the nice run of illustrated covers. Hey – don't blame me: blame Coronet; you can always grab the images and rearrange them to your heart's content. And by the way, a few of these covers haven't yet made it into the Violent World of Parker cover galleries, so this may be the first time some VWoP regulars have set eyes on them. Click on the covers to enlarge, and enjoy.