In My Time by Dick Cheney, with Liz Cheney (Threshold, 2011): Signed First Edition

Let's crack on with the signed editions from my bookshelves, shall we? And this next signed book was actually sent to me by a friend and fellow blogger, who went above and beyond the call of duty to obtain the John Hancock in question... 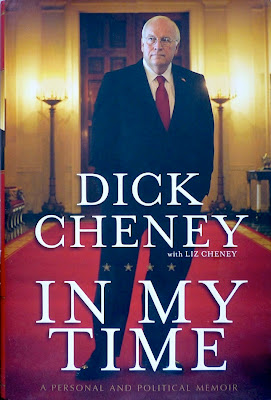 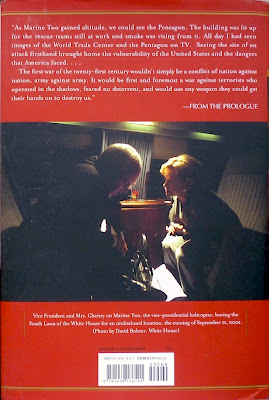 This is the American first edition/first impression of former US Vice President Dick Cheney's memoir, In My Time, published by Threshold in 2011. It was a gift from Book Glutton, who, having read my series of posts on political diaries in September of last year, knew I had an interest in political autobiographies (and who probably wondered if I'd ever get round to blogging about the book, ingrate that I am; he sent it to me in November). Even given that my politics and the Vice President's are poles apart (on most things, at least – although that hasn't stopped me reading and enjoying political tomes in the past), I was still dead chuffed to receive this copy of In My Time, especially so in light of this: 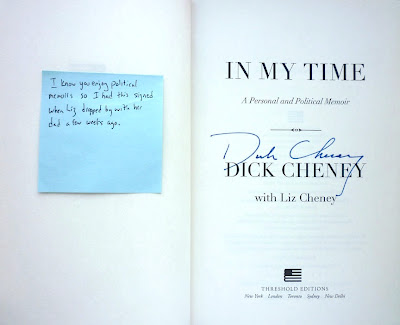 Dick Cheney's signature on the title page (with Book Glutton's accompanying post-it note on the blank verso). There aren't that many signed copies of the memoir available: AbeBooks currently has fewer than ten, all of them in the States, and the majority of them being the Threshold limited-to-5,000-copies cased edition. My copy isn't one of those, however; it's the standard first edition, and was signed by the Vice President at Book Glutton's place of work.

BG, you see, works with, and is friendly with, Liz Cheney, the VP's daughter, and co-writer of In My Time. In the wake of the VP's book tour, BG spent quite a while trying to coordinate handing over a signed copy or two, but the stars never aligned. So eventually Liz frogmarched her father over to hers and BG's office to sign the books there, which BG was as astonished by as I was: as he told me, "One does not summon a Vice President to have him sign a book". The kicker being, BG wasn't in the office when the VP visited, and so missed meeting him. Gah! 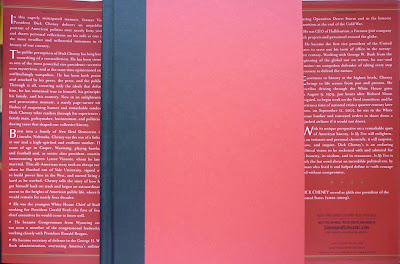 Still, at least both he and I now have signed firsts, and it was very kind of BG, Liz and indeed the Vice President to make that happen; I'll certainly treasure my copy. And Book Glutton may well be interested in the next signed edition I'll be showcasing, as it's a novel by an author he's a big fan of...
Posted by Nick Jones (Louis XIV, the Sun King) at 04:26