Jaws by Peter Benchley: the Original Novel (Andre Deutsch, 1974), Basis for the 1975 Movie

Next in this series of posts on books which begat perhaps more famous films, we turn to a 1974 thriller, the 1975 movie adaptation of which has taken on a near-mythic status over the years – not least due to its problematic production – and is currently once again showing on cinema screens here in the UK: 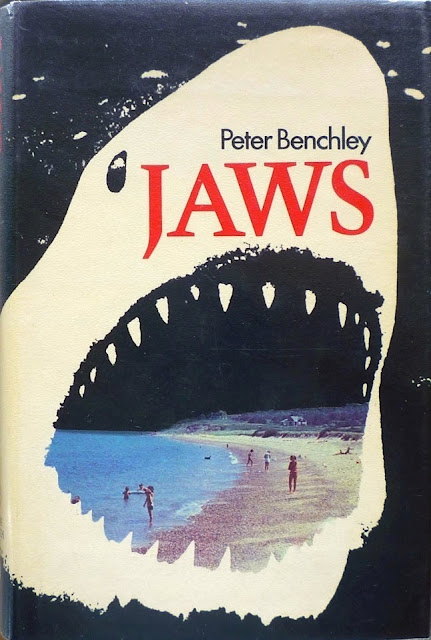 First published in Britain by Andre Deutsch in 1974 – the same year as the US Doubleday first edition – Jaws was American author Peter Benchley's debut novel – although not his first book; he'd already had a couple of non-fiction works published by the time Jaws arrived. I found this Deutsch first edition/first printing at the Midhurst Book Fair a few months back, a snip at £9.50; copies of the Deutsch first edition/first impression (it went through multiple printings) can go for anything up to £100 – depending on condition – so I was rather pleased with this score. 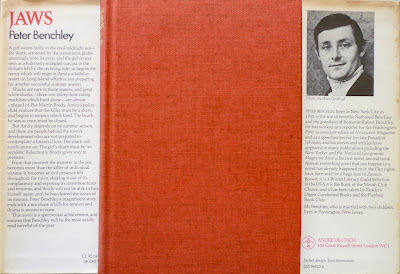 It's worth taking a look at Tom Simmonds's full design for the dust jacket – which differs to the American edition – as it stretches round to the back cover: 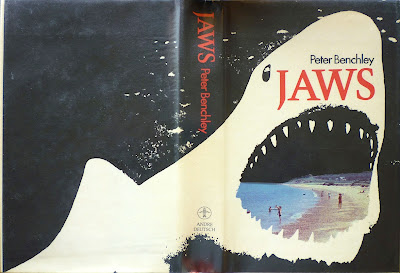 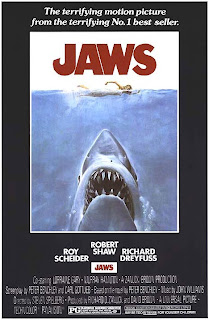 As for the book itself, I must admit it's bloody ages since I read it – I probably borrowed it from Beckenham Library decades ago, maybe even in this edition – and so I recall more about Steven Spielberg's film than I do the original novel. Certainly the memorable opening scene of Jaws the movie, with the shark savaging the hapless female swimmer, is lifted straight from the book, and the novel ends much as the film does, with Brody paddling towards the shore after his close encounter (ahem) with the Great White (although with one significant change). But I do remember it being a darker affair than the adaptation – for one thing, Brody and his wife, Ellen, don't get on terribly well in the book – and there being a subplot concerning an extramarrital affair which didn't make it into the movie. Handily, IMDB has a list of differences twixt novel and film, although be warned that by its very nature the list is somewhat spoilery. 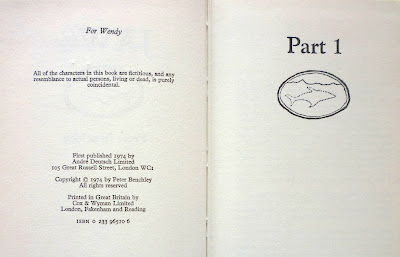 Thankfully, my memories of the next book I'll be blogging about are rather better, because I read it only recently; it's the movie adaptation I can't recall terribly well, although given its standing in the cinematic pantheon, that might not be such a bad thing...
Posted by Nick Jones (Louis XIV, the Sun King) at 04:55