The two movies I've spotlighted thus far in this series of posts on books which begat perhaps more famous films – Where Eagles Dare and Jaws – are at least the equal of their source texts, and arguably better. But of course, that's not always the case with book-to-film adaptations – rarely the case, even – as this next novel amply demonstrates: 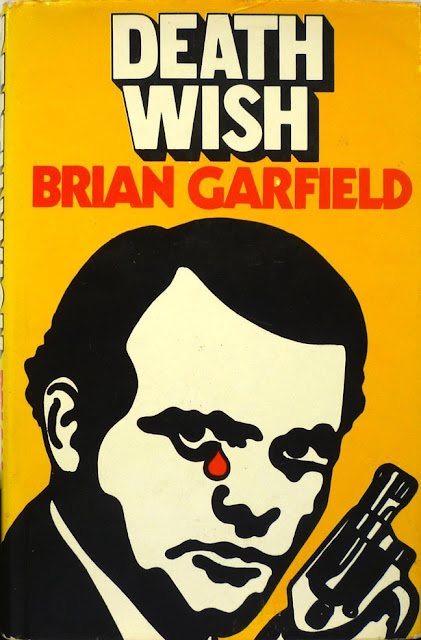 This is the British first edition of Brian Garfield's Death Wish, published in hardback by Hodder & Stoughton in 1973 – the year after the US David McKay edition – with a dust jacket designed by Jefferson Godwin. I nabbed this copy at last year's London Paperback & Pulp Bookfair, for the princely sum of nine quid – which, considering the cheapest Hodder first on AbeBooks at present is twenty quid, with the remaining five copies ranging from £95 to well over £200, was quite the bargain. 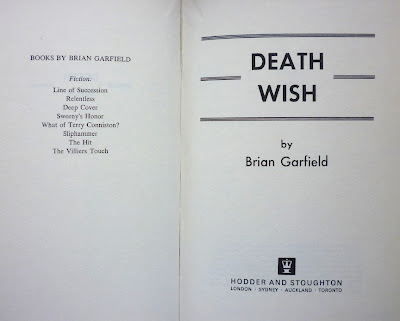 Death Wish wasn't Brian Garfield's first novel – he'd had over a dozen published prior to Death Wish, a mixture of crime works and westerns (a number of them pseudonymous) – but it was the first of his books to be filmed. That film, directed by Michael Winner and starring Charles Bronson as Paul Kersey (Paul Benjamin in the book), was released in 1974, and would become notorious for its perceived glorification of vigilantism, with a quartet of sequels appearing in its wake. It's a long time since I've seen the movie, but I don't remember it being terribly good, and I certainly don't recall it possessing any of the depth of the original novel, which is a powerful, pacy meditation on loss, bereavement and revenge. 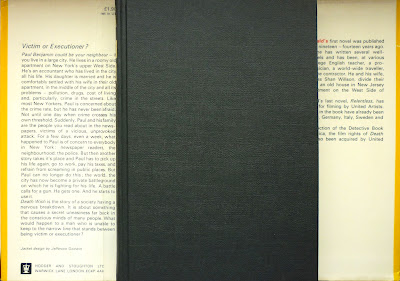 Unlike the comparatively toned and svelte Bronson of the film, the Paul Benjamin of the book is a middle-aged, overweight New York accountant (Bronson is an architect in the movie), and where Winner visualizes the opening assault on Paul's wife and daughter – throwing in a rape for good measure – in the book the attack happens "off-page". The first Paul hears of it is via a phone call from his son-in-law, and when he eventually learns of his wife's death at the hospital, he plunges into a spiral of rage and depression, frustrated at the police's inability to find the attackers, reduced to drifting about his apartment or aimlessly walking the streets of Manhattan.

It's not until halfway through the book that he starts to actively seek out trouble, fending off a knife-wielding kid using a kosh made of coins and then, in the closing stages of the novel – and having acquired a gun during a business trip to Arizona – embarking on a murderous spree. But there's no sensationalizing here: Garfield doesn't shy away from depicting these shootings as the squalid, sordid affairs they are, and leaves us in no doubt as to how damaged and increasingly unhinged Paul has become. Though there are glimpses of approval from the press, the public and the police, Paul's taking the law into his own hands is self-evidently a symptom of his grief and madness, thrown into stark relief by Garfield's extensive detailing of Paul's ordinary, humdrum day job. 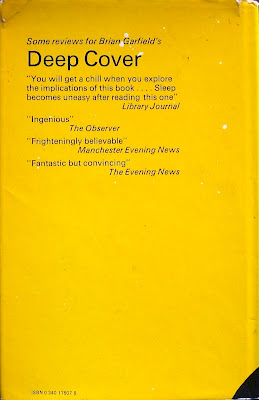 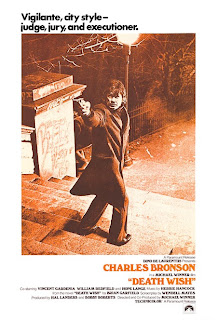 Garfield went on to pen a further twenty-five or so novels after Death Wish, including Gangway! (1973), a collaboration with his friend and poker buddy, Donald E. Westlake – hence why I'm cross-posting this review on The Violent World of Parker blog (although Death Wish will be of interest to VWoP regulars in its own right) – and the Edgar Award-winning Hopscotch (1975). He also wrote a sequel to Death Wish, Death Sentence (1975, itself adapted for the screen – even more loosely than Death Wish, although more to Garfield's liking – in 2007), in which Paul continues his one-man war on crime in Chicago – where, oddly enough, Charles Bronson winds up at the end of the movie Death Wish. I haven't read the sequel yet, but this Pulp Serenade review got me interested enough to order a copy, so I'll be reviewing it myself at some point. And while we're on the subject of other folks' reviews, Olman turned his beady eye on Death Wish (the novel) earlier this year, noting Garfield's vivid and unnerving portrayal of 1970s New York, so go read his review for an alternative take on the book.

As for the Charles Bronson movie sequels to Death Wish, well, probably the less said about them the better – and who the hell knows what the mooted Joe "The Grey" Carnahan remake – set to star either Sylvester Stallone or Liam Neeson, depending on who you believe – will be like. But Bronson did star in a number of other interesting movies in the 1970s, including one in the same year as Death Wish – and it's to that film, and its attendant novel, that I'll be turning next...
Posted by Nick Jones (Louis XIV, the Sun King) at 06:18