Book Review: Where Eagles Dare by Alistair MacLean; the Original Novel (Collins, 1967), Basis for the 1968 Movie

Behind every great man, or so the old saying goes, there's a great woman – and I'd suggest you could make a similar claim for great films: often as not, the movies that live longest in the memory have their basis in a brilliant book. So, with the summer blockbuster season well underway, I thought I'd embark on an extended series of posts on novels which begat perhaps more famous films. Some of the films to be featured in this run will be of the big budget, big box office returns variety; others more obscure or cult; and still others staples of the afternoon television schedules; but all share in common a terrific source novel, and over the coming weeks I'll be showcasing some of the first (and other) editions of those novels from my collection – beginning with a classic World War II action-adventure-spy thriller: 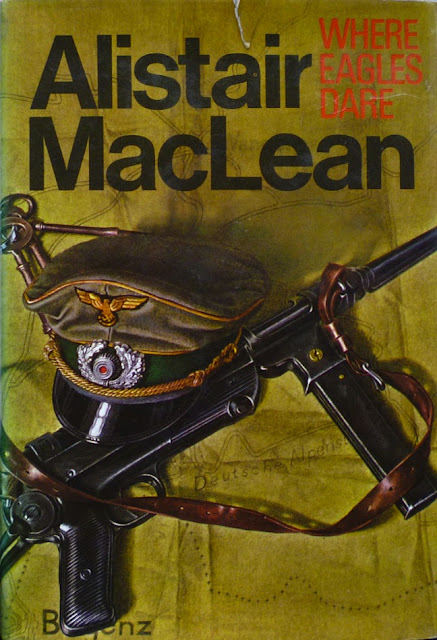 First published in hardback in the UK by Collins in 1967, under a dust jacket designed by Ian Robertson, Where Eagles Dare was Alistair MacLean's tenth novel (under his own name; he had a couple of others published under the nom de plume of Ian Stuart), and is the story of a daring raid by a squad of specialist British troops – plus one American – on the remote Alpine castle of Schloss Adler – headquarters of the German Gestapo. I bought this first edition/first impression in Dim and Distant in Heathfield, East Sussex, but there are plenty of firsts available on AbeBooks, although be aware that the Collins edition did go through a few printings, so many of the listings may well be for later impressions.

Now, I think I'm safe in saying that, for an entire generation, the movie adaptation of Where Eagles Dare has gone beyond cult status to become a totemic cinematic icon. Originally released in 1968, directed by Brian G. Hutton and starring Richard Burton and Clint Eastwood, Where Eagles Dare always seemed to be on telly on a Saturday afternoon when I was a kid (see also The Eagle Has Landed, The Magnificent Seven, etc.) – which, I suspect, is part of the reason for its popularity. But it's also a tremendous film in its own right, stuffed with perilous action sequences, quotable lines and a showstopping cross-and-double-cross scene set deep within Schloss Adler. Both Quentin Tarantino and comics writer Garth Ennis cite it as one of their favourite films, and it even has its own dedicated website. 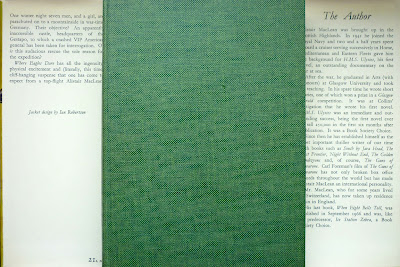 What's interesting is how so much of what's great about Where Eagles Dare the movie has its genesis in Where Eagles Dare the novel. All of the major beats are present and correct – the initial parachute jump into the Alps; the cable car set-pieces; the aforementioned double-bluff (or possibly triple-bluff) scene – while Richard Burton is the novel's Major John Smith personified, from his stoic cynicism to his legendary callsign to HQ ("Broadsword calling Danny Boy, come in, Danny Boy") – which, given that MacLean effectively wrote the novel for Burton, and actually penned the film's screenplay before the book (big thanks to both Paul Simpson and Jeremy Duns for pointing that out to me), I guess isn't so surprising. The only real differences centre on the character of Lieutenant Schaffer, played in the film by Clint Eastwood. Schaffer is rather more gabby in the novel than the taciturn Eastwood, and a lot less murderous: where Clint merrily machine-guns his way around the castle, the original Schaffer barely harms a soul.

Indeed, and as the Where Eagles Dare website notes in its introduction to the novel, the level of violence in the book is considerably lower than that of the movie. Smith and Schaffer actively go out of their way to avoid killing anyone in the book – the exceptions being the traitorous double-agents who meet their doom atop the cable car. It's an altogether jollier affair than the film, although no less tense and gripping.

That said, I think I still prefer the film to the novel, if only because it was the film I fell for all those years ago. And the same is probably true of the next book I'll be showcasing – the similarly totemic motion picture adaptation of which is currently on re-release in cinemas in the UK...
Posted by Nick Jones (Louis XIV, the Sun King) at 07:44