This next book in this series of posts on journalistic-type tomes is, in truth, closer in style and tone to a novel than it is to non-fiction. But it was written by a journalist, and it is essentially factual, and I can't think of any other forthcoming series of posts in which it will fit, so here it shall reside: 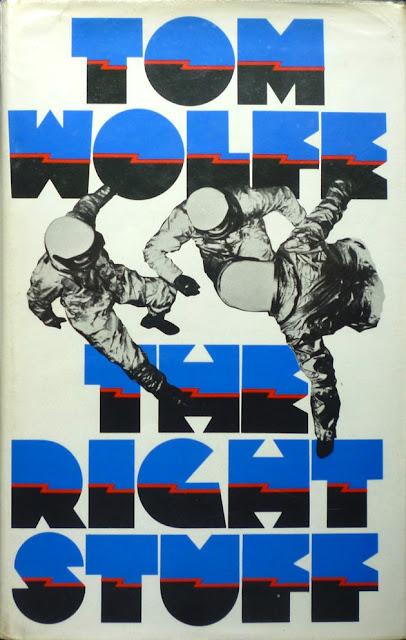 It's a UK hardback first edition/first impression of Tom Wolfe's The Right Stuff, published by Jonathan Cape in 1979 under a dustjacket designed by Craig Dodd. I bought this copy in Lewes' Bow Windows Bookshop, and while it may not have been, strictly speaking, a "bargain", it was certainly reasonably priced, given that 1st/1sts on AbeBooks – of which there are only about ten – range from £20 to over £40. (Historically – or at least as long as I've lived in Lewes, which is about four years – Bow Windows' modern first have been priced... shall we say, somewhat optimistically, but recently they've been pricing their newer acquisitions at much more agreeable – and affordable – levels, with the consequence that I've found myself buying more books there this year.) 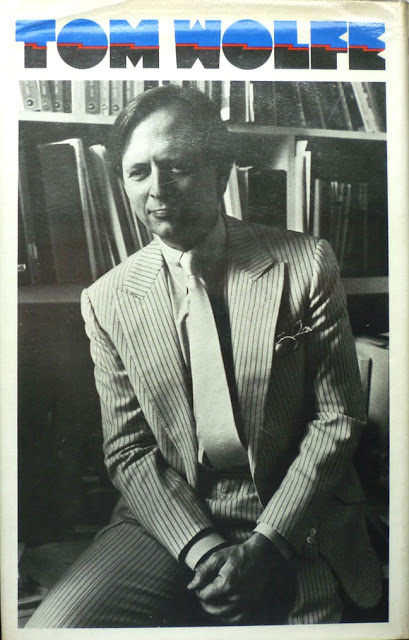 As I'm sure we're all well aware, The Right Stuff is an ardent account of the early years of the space race, charting the adventures of the US air force pilots who formed the vanguard of the American space programme – John Glenn, Gus Grissom, Alan Shepard, etc., and especially Chuck Yeager. It originally appeared as a four-part article in Rolling Stone magazine in 1973, and was a prime example of "the new journalism", i.e. that writing by Wolfe, Truman Capote, Hunter S. Thompson, Norman Mailer, Joan Didion and others in the 1960s and '70s which took a more literary approach to journalism. 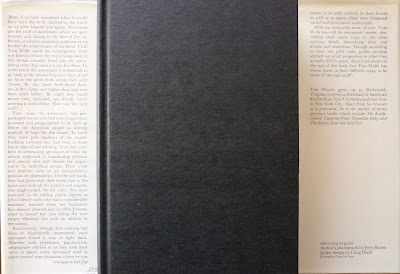 As a book, The Right Stuff certainly reads more like a work of fiction than non-fiction: though written in the third person, Wolfe frequently ventures inside the heads of the various protagonists, and artfully constructs a propulsive narrative far removed from that of a dry biography. And that's what really makes the book such a joy to read: Wolfe's special knack for colourfully communicating the sheer, breathless excitement of it all, as, led by Yeager, the test pilots break the sound barrier and then are supplanted by the Mercury astronauts, hand-picked to be blasted into space atop towering rockets instead of at the stick of a rocket-propelled plane – "spam in a can", as one of the Mercury seven, Gordon Cooper, so memorably put it – but actually more concerned about retaining the respect of their pilot peers.

Like the previous two books in this series of posts, I originally read The Right Stuff years ago, and was bowled over by it – and by the terrific 1983 Philip Kaufman film adaptation, starring, among others, Scott Glen as Shepard, Fred Ward as Grissom, Ed Harris as Glenn and Sam Shepard as Yeager. Both book and movie brought a number of hitherto arcane phrases into common parlance – "pushing the envelope" among them – and helped ignite a passion for space exploration in a generation too young to have witnessed Project Mercury first hand (myself being a case in point). It is, by any yardstick, a brilliant book, and if you haven't read it, I urge you to do so.

The Right Stuff is, as I say, novelistic in approach, but the final two books I'll be reviewing in this run of posts are both yer actual, proper novels. Each is set in a newsroom – one in 1980s Florida, the other 1960s Fleet Street – and each is comically illuminating as to what journalists actually do (or don't do, in some cases) – although the two papers concerned couldn't be more different...
Posted by Nick Jones (Louis XIV, the Sun King) at 06:13