Following on from a post on The Right Stuff, journalist Tom Wolfe's novelistic account of the space race, to finish off this run of journalism and media-related missives we turn to the first of two novels about journalism – and return to the author who kicked off this series: Donald E. Westlake. 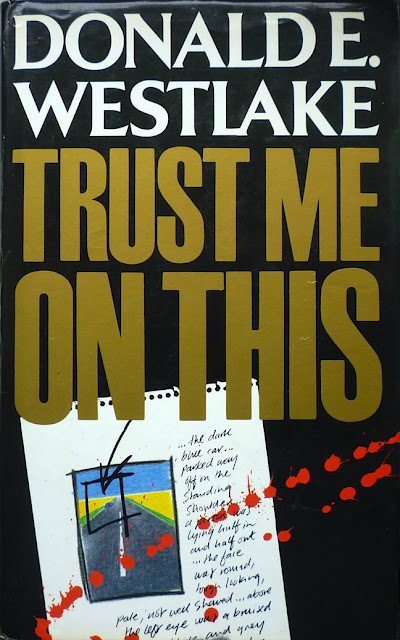 Trust Me on This was first published by Mysterious Press in the US in 1988 and by Allison & Busby in the UK in 1989, which is the edition you can see above (and which I blogged about as a Westlake Score aaalllll the way back in August 2010). Our leads are Jack Ingersoll, an editor at the Florida-based Weekly Galaxy, and Sara Joslyn, a newly recruited reporter for the Galaxy, who, whilst driving to the paper on her first day, chances across a car on the hard shoulder, in which is the body of a man who's been shot in the head. Sara reports the body to the guard at the Galaxy gate, and then gets swept up in her new job, only occasionally wondering about the dead man – how he got there, who killed him, and whether the killer has anything to do with the Galaxy.

If that makes Trust Me on This sound like a murder mystery, then let me assure you that it's really not – or rather, only in passing. Westlake is much more interested in the goings-on at the Galaxy – essentially a stand-in for supermarket tabloid The National Enquirer (and indeed for muckraking British papers like The Sun, the Daily Star, and the late, unlamented News of the World) – than he is in the mechanics of a whodunnit – so much so that the murder subplot feels slightly tacked on, as if Westlake felt he had to include it in order to get his readers to buy a novel about gutter journalism.

Because it's the inner workings of the Galaxy that are the real draw here. Populated by a cast of memorable grotesques, among them slimy, feline editor (and rival to Jack) Boy Cartwright, obsequious editor-in-chief Jacob Harsch, and hard-nosed, amoral reporter Ida Gavin, the Galaxy is owned by publisher Bruno deMassi – "Massa", as his employees call him – whose office is in an elevator, moving from floor to floor as his needs arise. Each morning Massa gathers his various editorial departments around his desk – which slides out of the elevator – to pick over their offerings, drawing a red line through those which displease him, and responding enthusiastically to the likes of "Does Sex Cure Gallstones?" and "The Galaxy Clones a Human Being".

But the story Massa wants above all others is John Michael Mercer, star of the network TV smash Breakpoint. Massa is obsessed with Mercer – who in turn despises the Galaxy – so when word reaches the Galaxy that Mercer is to be wed, all of the paper's considerable resources are dedicated to finding out to whom, where, and when, culminating in Jack's entire editorial team decamping to Martha's Vineyard and launching an all-out assault on the wedding – by land, sea and air. 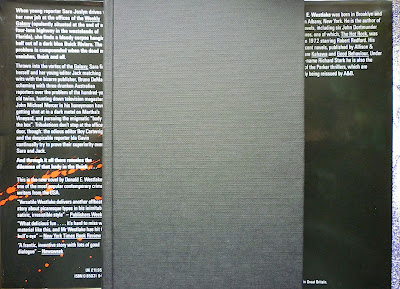 Trust Me on This is, at root, a comic novel – and a very good one at that – but there's much within it that rings true. As Westlake notes in "A Word in Your Ear" at the start of the book, "Were there a factual equivalent to the Weekly Galaxy, it would be much worse than the paper I have invented, its staff and ownership even more lost to all considerations of truth, taste, proportion, honor, morality or any shred of common humanity." The novel frequently returns to the blurry line between reporting the news, and creating it. In its less offensive form, concocting news can mean actively seeking out a quote to fit a story, but the ultimate corollary of that is, of course, wholesale fabrication. One relatively minor episode neatly illustrates this. Drawing a blank on the backstory of Mercer's romance with his wife-to-be, Felicia, Jack invents a story about how Felicia and Mercer met, then instructs Ida to find a friend of Mercer's and get him to recite the tale on the phone so that the Galaxy will have it on tape, thus standing the story up both to the paper's fact-checkers and in the event of any future legal action.

It's hard to believe those kinds of practices occur out here in the "real" world (although perhaps easier to credit in the wake of the phone hacking scandal), but funnily enough, around the same time I read that sequence, George Michael was tweeting about a very similar News of the World sting: 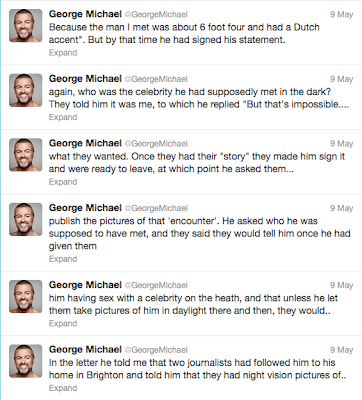 All that said, however, and despite the didactic intentions expressed in his preface, Westlake almost revels in the antics of the Galaxy's reporters, delighting in their often ingenious schemes to get the stories that Massa demands. Certainly he liked Jack and Sara enough to spin them off into a sequel, Baby, Would I Lie? (1994), and the final unveiling of the killer comes as something of an afterthought, overshadowed by an unhinged quest to capture a photograph of recently deceased country singer Johnny Crawfish in his casket. The methods deployed by Jack and co. may be underhand (and occasionally illegal), and the Galaxy – with its pressure cooker atmosphere and bizarre layout (cubicles are denoted merely by lines on the floor, but woe betide anyone who walks through these invisible "walls") – may come across as a horrible place to work, but in the course of their duties, the various (well-paid) editors and reporters have rather more fun than that which might reasonably be expected of players in a purely cautionary tale... 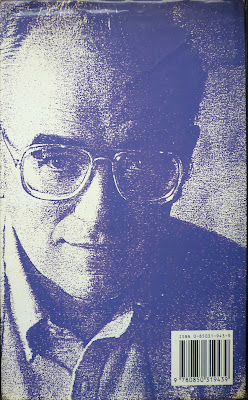 By the time Trust Me on This was published in the States, the newspaper trade in the UK had changed beyond all recognition, as the great papers deserted their traditional home of Fleet Street in favour of Wapping and Docklands. But the final novel I'll be reviewing in this run of posts was written and published in Britain a good two decades prior to Trust Me on This, and paints a very different picture of the trade of journalism...
Posted by Nick Jones (Louis XIV, the Sun King) at 07:48