Just the One: The Wives and Times of Jeffrey Bernard, by Graham Lord (Biography, Sinclair-Stevenson, 1992): Book Review

From a 1986 collection of journalist and epic boozer Jeffrey Bernard's Low Life columns, we move on in this series of posts on journalism and media-related books to a 1992 biography of Bernard: 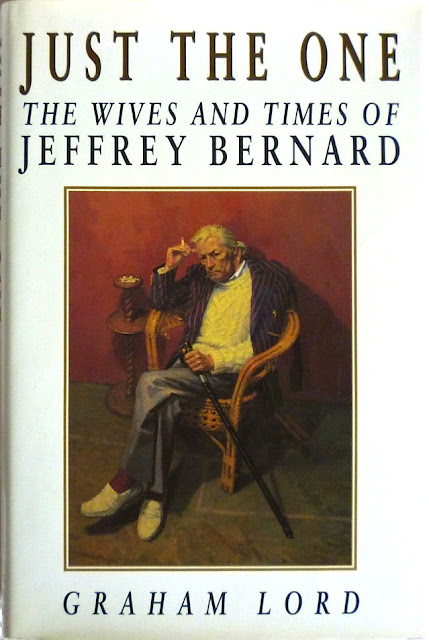 First published in hardback in the UK by Sinclair-Stevenson, Just the One: The Wives and Times of Jeffrey Bernard by Graham Lord is a warts-and-all account of Bernard's life – and there are, it has to be said, numerous warts within. For while Bernard subjected his own day-to-day existence to what appeared to be forensic scrutiny in Low Life – detailing hilarious drunken episodes but also charting his deteriorating health with admirable frankness – Just the One reveals that there was much that Bernard didn't cover in his columns. Lord had known Bernard for getting on for fifteen years by the time he came to write this biography, and he turned up all manner of interesting nuggets in the course of his research – both from Bernard himself and from his many friends, associates and enemies. As Lord reports in his introduction:

Slowly the secrets started emerging. That his childhood had shimmered with lust for his mother. That his 'mad' sister Sally had been certified and committed to an asylum in 1953 but was still living in South London in 1992. That many of his friends are convinced that he went through a homosexual phase late in his teens and early twenties. That his first wife Anna's real name wasn't Anna at all, a revelation that astonished Bernard when I told him. That she was forced to give up her illegitimate daughter Alfreda for adoption and regretted it ever after. That her mysterious – perhaps sinister – suicide happened neither when nor how he had thought it had. That Alfreda herself later changed her name to Sally Bernard and claimed to be the mother of Jeffrey's grandchildren. That Bernard too had made several suicide attempts. That his third wife's daughter, Isabel, was not his child and that Isabel, now twenty-two, had known this for five years but had kept it from him to protect his feelings. That he had in fact been sterile from puberty. That his marriages had been disturbingly violent. 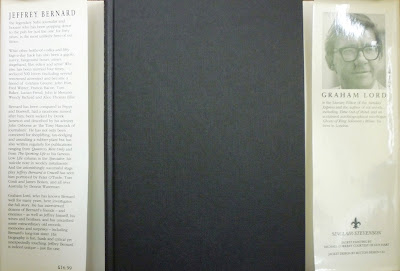 Jeffrey Bernard's Low Life column was, of course – and as a later paperback printing of the first collection (a second collection, More Low Life, was published by Pan in 1989) had it – "A Kind of Autobiography", but Lord also reports that he had "for years tried to persuade [Bernard] to write his autobiography but he was always too lazy (and often too 'unwell') to do more than doodle a few notes. This did not of course prevent him from accepting several large advances from naively optimistic publishers for this non-existent biography..." One of those advances famously led Bernard to write to the New Statesman, stating he'd be "grateful to any of your readers who could tell me what I was doing between 1960 and 1974" – prompting a response from the Daily Mirror's Michael J. Molloy, who replied that "on a certain evening in September 1969, you rang my mother to inform her that you were going to murder her only son". 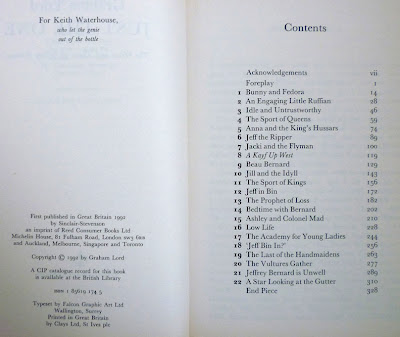 I originally read Just the One many moons ago – my mum has a first edition on her shelves – but the copy seen in this post was a much more recent acquisition. The biography has been out of print for years – a Headline paperback printing followed the Sinclair-Stevenson edition in 1993, but that was it – and is in fairly short supply. But on a recent sojourn to the excellent Slightly Foxed secondhand bookshop on Gloucester Road (I was in town for the London Book Fair, and managed to slope off for an hour) I found a fine first of Just the One in the shop's basement for a fiver (I ferreted out some other nice books in the shop too, two of which, Anne Chamberlain's The Tall Dark Man and Mary Kelly's A Cold Coming, with their Peter Rudland-designed wrappers, have already made it into my Beautiful British Book Jacket Design of the 1950s and 1960s gallery). The jacket design on the Sinclair-Stevenson edition, by the way, is by Button Design Co., and the splendid painting of Bernard on the front is by Michael Corkrey. 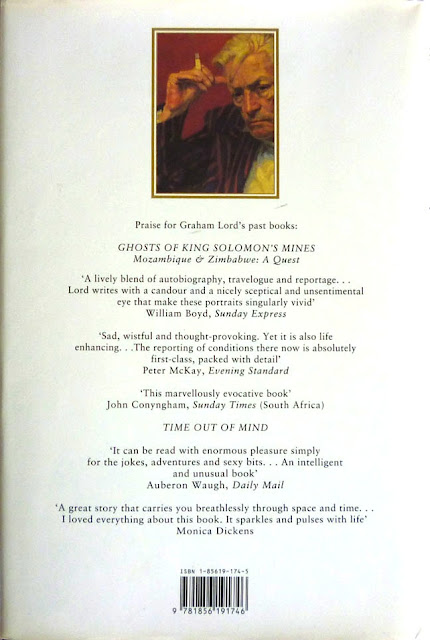 A few final notes before we move on from Mr. Bernard: journalist Ian Penman drew my attention on Twitter to a couple of other Bernard-related books, neither of which I'd come across before. One, The Big One, the Black One, the Fat One and the Other One: My Life in Showbiz (Michael O'Mara, 1992), is a collection of William Donaldson's Independent columns, and features, according to Ian, a "long section written in a boozy persona parodying Jeffrey Bernard", while the other, You're Barred, You Bastards: The Memoirs of a Soho Publican (Sidgwick & Jackson, 1991), is the memoir of Norman Balon (co-written with Spencer Bright), the landlord of Bernard's Soho watering hole of choice, The Coach and Horses, and is, Ian reckons, "not half bad at all". And it was the Coach that was the venue for perhaps my favourite Jeffrey Bernard story, which occurred around the time mobile phones were first appearing. Having trouble attracting Norman's attention in the Coach one day, Bernard spied a city type next to him at the bar talking on his mobile. Bernard asked to borrow the phone, and then rang the Coach on it. When Norman answered, Bernard barked: "Is there any chance of getting a fucking drink in this place?" 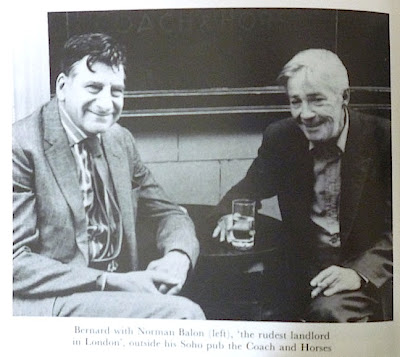 And from Jeffrey Bernard's low life, next in this series on journalistic books we turn to a rather more high altitude existence, with an excitable account of man's envelope-pushing attempts to conquer space...
Posted by Nick Jones (Louis XIV, the Sun King) at 09:49