Having posted a review of traitorous Cambridge spy Kim Philby's 1968 memoir My Silent War, next I'm turning to a 1978 novel about betrayal in Britain's intelligence services by a writer who was a good friend of Philby's – indeed, he provided the introduction to My Silent War – but who was at pains to point out that the protagonist in his book wasn't based on Philby. 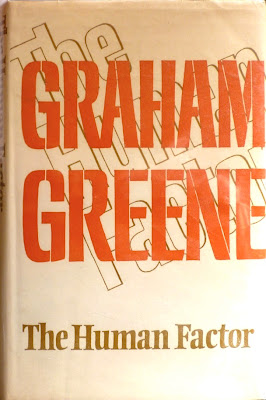 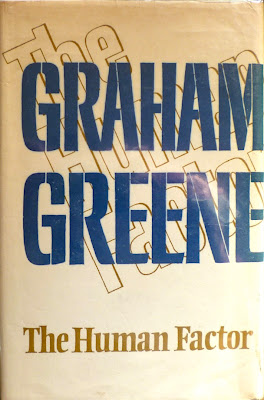 Published in hardback in the UK by The Bodley Head in 1978, The Human Factor was Graham Greene's twenty-third novel, and his first in five years, following 1973's The Honorary Consul. 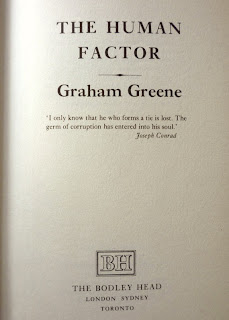 Now, before we get into the novel itself, I should point out that I have blogged about The Human Factor before, when I acquired two copies of the novel in quick succession in March of last year, one of them being the same edition as the Bodley Head copy seen above, with its Michael Harvey-designed dustjacket. Or rather, almost the same edition. Because as I outlined in that post, the copy of The Human Factor I bought back then wasn't, I subsequently discovered, the true first edition of the novel – which was why I then bought an inexpensive American first edition shortly after, in Lewes's A & Y Cumming. It was actually the second impression, or issue (or state), identifiable only by the publisher's logo on the title page, which is a "BH" in a box. Whereas the true first – which, it's estimated, had a print run of just 1,000 – has an oval device on the title page with a drawing of the head of Sir Thomas Bodley (or possibly Shakespeare; opinions vary) in it (innit). (The logo was changed for later editions apparently at the insistence of Graham Greene himself; being, like myself, an inveterate book collector, I suppose Greene cared passionately about such things, although why he objected to Bodley/Shakespeare's head, I have no idea.) 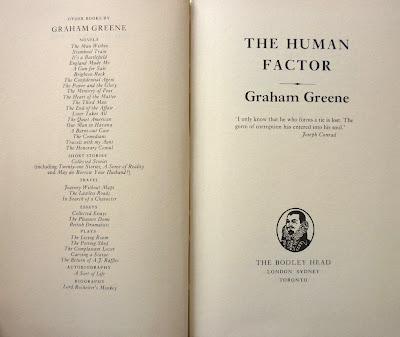 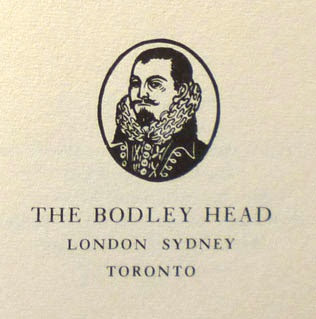 which means that I now own three copies of the same book. Sigh. A ridiculous state of affairs, and I'll be releasing the other Bodley Head copy back into the wilds at the earliest opportunity, but I might keep the US edition, partly because I like the Janet Halverson-designed jacket, but mostly because The Human Factor is a fine novel indeed.

Our lead is Maurice Castle, an aging, desk-bound agent in Britain's Secret Intelligence Service with responsibility for the UK's former African colonies. Once upon a time Castle operated in South Africa, running a network of agents, one of whom, a black South African, Sarah, he fell in love with and spirited out of the country (to the suburbs of London, thereafter marrying her), along with her young son, Sam. But his hopes of a quiet retirement with his family hit a snag when a leak to the Russians is traced to his department – and since his department essentially consists of himself and a young man named Davis, suspicions were always destined fall on either one or the other of them.

Actually it's Davis who becomes the prime suspect, and so the Chief of SIS, Sir John Hargreaves, tasks the pernicious Doctor Percival and the rather more reluctant security broom Colonel Daintry to investigate the hapless Davis, and, should enough (circumstantial) evidence be uncovered, to quietly dispose of him. 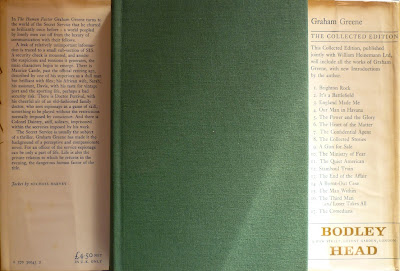 There is what would commonly be called a twist or revelation at the heart of The Human Factor, but it's so heavily telegraphed that it's clear that Graham Greene had little or no interest in it as a plot device. In order to continue discussing the novel, however, I'm going to have to "spoil" the reveal, so if you wish to remain blissfully unenlightened, stop reading now. (Another reason to stop reading now might be to avoid boredom, but that's entirely up to you.)

Still with me? OK, here's the shocking truth: Castle is the leak. Not especially startling, I know, but then I'm sure Greene didn't intend it to be. He's much more interested in Castle's motivations for betraying his country, as opposed to withholding information in order to build suspense (although there is a later, quieter twist which is all the more effective for being underplayed). Because you see, Castle doesn't especially consider Britain to be his homeland; as he states on more than one occasion, he sees himself as African. His feeding of secrets to the Soviets is a by-product of that dedication to South Africa in particular, of his disgust at Apartheid: it was a Communist who assisted his wife and her son in their escape, for which Castle was grateful and felt indebted, and Castle has continued to help the Russians because their interest in Africa seems to him to be potentially more beneficial to that continent than Great Britain's post-colonialist aims.

In that sense, there are nuances to Castle's treachery that aren't there with Kim Philby's more straightforward avowed dedication to the USSR, which is perhaps why Greene was adamant that the novel isn't a roman a clef. Nationality, age and occupation aside, there are few parallels between Castle and Philby, although Greene evidently believed – correctly – that those three factors, plus his friendship with Philby, would be enough for comparisons to inevitably follow (Greene delayed publication by ten years to let the Philby affair fade in the memory a little).

Castle is quite a different character to Philby (at least from the little I've thus far gleaned about that latter); as his surname suggests, he's guarded and remote, grand but not ostentatious. But he's just one of a handful of middle-aged men in the book, all of whom seem adrift in a world that they no longer comprehend. Aside from Castle, there's the conflicted, perplexed Daintry, separated from his wife, virtually estranged from his daughter, a lonely man with no friends and no social life to speak of: he even resorts to inviting Castle, who should really be under investigation, to his daughter's wedding because he has nobody else to go with. But this incomprehension of contemporary life also manifests itself in surprising ways: early on there's an amusing muddle over Maltesers, followed much later by a brief discussion about Smarties ("I prefer the red and yellow ones," remarks one character; "I don't like the mauve").

Graham Greene's stated aim with The Human Factor "was to write a novel of espionage free from the conventional violence, which has not, in spite of James Bond, been a feature of the British Secret Service. I wanted to present the Service unromantically as a way of life, men going daily to their office to earn their pensions, the background much like that of any other profession – whether the bank clerk or the business director – an undangerous routine, and within each character the more important private life." In that, he succeeds admirably. But like John le Carré's Tinker, Tailor, Soldier, Spy, it's in that "private life" that the key to the novel's success resides: those abiding, universal concerns of loneliness, love, race, family and mortality which impact us all. An espionage novel, then, but so much more besides. 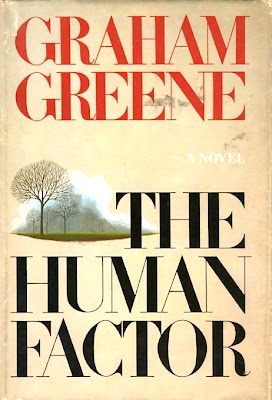 And I'll be staying with the espionage for my next post: another exclusive Existential Ennui interview, this time with an author who wrote a series of more action-orientated spy novels in the 1960s – which I blogged about earlier this year – but who has also written around 200 other books besides...
Posted by Nick Jones (Louis XIV, the Sun King) at 06:50