Continuing this run of posts centring on spy novelist Jeremy Duns – whose latest Paul Dark thriller, The Moscow Option, was published in the UK yesterday – next I'm reviewing a book that isn't, in fact, by Jeremy at all, but instead is by one of his favourite authors – and, indeed, is one of his favourite spy novels – as Jeremy himself will shortly elucidate... 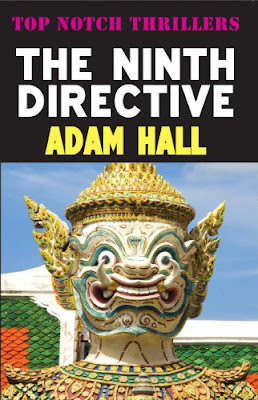 The Ninth Directive by Adam Hall was first published in 1966 by Heinemann in the UK and Simon & Schuster in the US (and is now available as an ebook and paperback from Top Notch Thrillers, which is the cover you can see above). Now, I have blogged about this book before, when I showcased a signed edition in September of last year. I've also blogged about Adam Hall – alias Elleston Trevor – previously, notably in this run of posts on his nineteen-book espionage series starring secret agent Quiller, of which The Ninth Directive is the second instalment (following 1965's The Berlin Memorandum). Quiller, for the uninitiated, is an operative of The Bureau, an ultra-secret British intelligence outfit which doesn't, officially, exist. The Quiller novels are all written in the first-person, Quiller's unique narrative style – with his curiously clipped sentences, his automaton-like reciting and numbering of facts, and his deployment of shorthand phrases like "red sector", "no go" and "so forth" – being one of the chief draws. 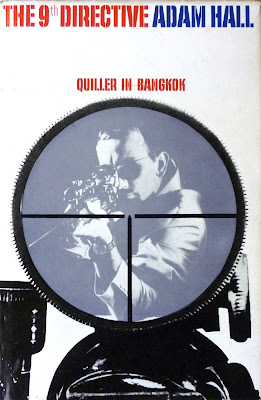 Another draw, of course, is that the Quiller novels are terrific spy thrillers, The Ninth Directive being a case in point. This time out, Quiller finds himself in Bangkok at the behest of his Bureau controller, Loman, who tasks Quiller with an unusual assignment: a "representative of the Queen" – only ever referred to in the narrative as "The Person", but clearly Prince Philip, the Duke of Edinburgh – will be embarking on a goodwill tour of the city, and Loman has the following instructions for Quiller: "During the visit we want you to arrange for his assassination."

That gobsmacking order closes out the first chapter (evidently Jeremy Duns learned a thing or two from Adam Hall in terms of injecting a jolting volte-face into the opening chapter of a novel), but as becomes clear thereafter, the mission is more nuanced than that would suggest: a credible threat on The Person's life has been received, so Quiller's task is to determine how that assassination might occur, and to stop it happening. Unfortunately, the assassin is Kuo the Mongolian, whose speciality is long-range hits using a rifle, which leaves Quiller with two factors to work out: where on The Person's route the attempted assassination will take place, and more importantly, from where. 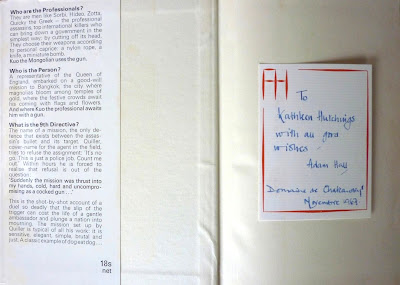 There follows a deadly game of cat and mouse – with much "tagging" and "flushing" (i.e., tailing and losing tails) – as Quiller tries to track down Kuo and his cell, an endeavour which is complicated by the involvement of "Mil6", who seem inordinately interested in Quiller. Why they are, and what Kuo's ultimate aim is provide a number of twists to the tale, leading to some searing and brutal set pieces, with Quiller facing seemingly certain death on a number of occasions. But he also finds time for love – or at least what passes for love in Quiller's world, which is to say a one-night stand with an equally damaged fellow operative – and the Bangkok backdrop against which the action is set is vivid and convincing.

Mind you, as Jeremy Duns recently pointed out to me, it's debatable how well Adam Hall knew Thailand, as Hall rarely visited the places he wrote about. Jeremy notes: "I was surprised to read an interview with him in which he revealed that he very rarely wrote about locations he had visited, because he found he lost the magic when he did that. Quite an astonishing thing to do, really. For the most part I think it's impossible to tell, and he makes locations come alive."

For Jeremy, "The Ninth Directive probably ties with The Tango Briefing [Quiller #5, 1973] for my favourite spy novel full stop. I read both in 2000, I think, one after the other. I love The Ninth Directive because it's both very pulpy in terms of plot – assassinate the assassin – but simultaneously seems extremely authentic. While reading the novel, you really believe that this is how a secret agent would think and act. It predates The Day of the Jackal by five years, but has much of that feeling of peeking inside a hidden world. I loved the way the target is never named, making it almost an elemental struggle to survive."

And there'll be plenty more from Mr. Duns, not only on Adam Hall but also on a variety of other topics, in the final post in this run of Duns: an exclusive Q&A with Jeremy, in which we discuss the books he read as a boy, his schooldays, how and where he writes, and of course his novels – including The Moscow Option – all illustrated with never-before-seen photos of his books. Look out for that over the weekend... 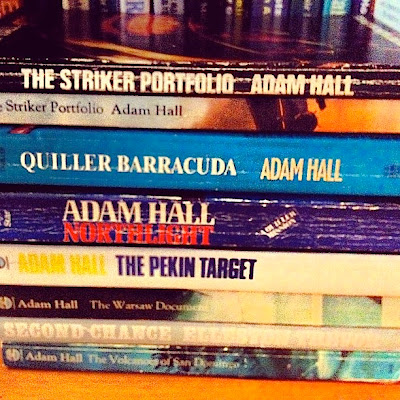