This week I'm blogging about British expat (he currently lives in Stockholm) author Jeremy Duns, whose third thriller starring traitorous spy Paul Dark, The Moscow Option, is published by Simon & Schuster in the UK tomorrow (12 April), as both a paperback and an ebook. Yesterday I posted a review of the second Paul Dark novel, Song of Treason (formerly Free Country) – and of course my 2011 review of the first book in the trilogy, Free Agent, can be found here – and later in the week I'll be reviewing one of Jeremy's favourite espionage works, a cracking 1966 spy thriller by Adam Hall, before rounding off this run of posts with something very special indeed from Mr. Duns.

But let's turn now to the latest Paul Dark outing: 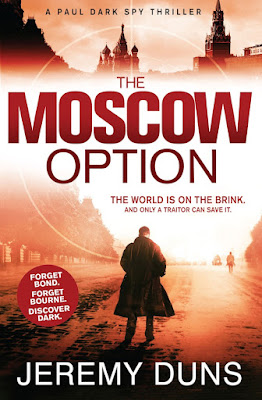 As with the initial two books in the trilogy, The Moscow Option is set in 1969 – and also as before, Duns bungs a tantalising twist into the opening chapter – although in this instance, it's followed by an even more gobsmacking moment in the second chapter. When last we left Paul Dark at the end of Song of Treason, he'd been forcibly extracted to Moscow, along with fellow British Intelligence operative Sarah Severn, there to await whatever fate his Soviet (former) masters decide for him. The Moscow Option opens five months on, and finds Dark languishing in a Russian prison cell, utterly bereft of hope and subjected to intermittent interrogation. So when he's marched out of his cell by a guard, he fully expects to be facing a firing squad. Instead, he's deposited in the back of a car with Sarah, driven to a nondescript building, and then taken in through the structure's air-locked door. The realization dawns that he's inside a nuclear bunker.

If that isn't alarming enough, in the lower levels of the bunker he's ushered into a huge hall, where, seated around a circular table are "around thirty elderly men, some of them wearing dark suits but most in uniform". One man is standing, "shirtsleeves rolled to his elbows... I didn't recognize him at first, because he was wearing spectacles and his hair was slightly in disarray, but then he looked up through dark eyes under thick eyebrows, and I realized with a start that it was Brezhnev."

It transpires that Soviet General Secretary Brezhnev and the gathered military and intelligence chiefs – among them GRU head Ivashutin and KGB head Andropov – believe that the USSR is under attack by the United States, and are debating launching a preemptive nuclear strike. A chemical assault on the Estonian coast has been reported, and eight American B-52 bombers have been detected heading towards Russia, armed with thermonuclear weapons. Dark can't explain the bombers, but based on his own experiences during the war he quickly determines that the chemical attack is almost certainly in reality a leak of mustard gas canisters, the forgotten cargo of a sunken U-boat. Unfortunately, the Russians don't believe him, and so he and Sarah effect a perilous escape and go on the run in order to try and prove the chemical incident is an accident, and so halt the impending nuclear Armageddon. 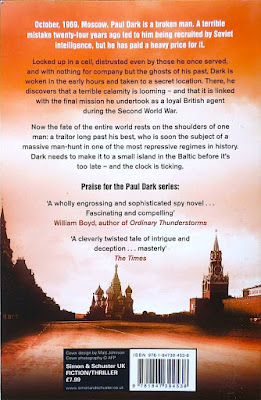 All of the Paul Dark thrillers draw on historical events for inspiration – each book has an Author's Note at the back detailing Duns's research (as well as a Select Bibliography) – but in The Moscow Option Duns goes one better by introducing actual players from the era – not only Brezhnev et al but also Cambridge spy and defector Donald Maclean, whom Dark recruits in his efforts to escape Moscow. (Kim Philby, who was also living in Moscow at this point, gets a mention, too, and was originally slated for a cameo – I'll be returning to that in the final post in this run.) Moreover, the Author's Note in The Moscow Option sheds light, in a frankly terrifying fashion, on how close the world came to nuclear apocalypse in 1969: as part of his "Madman Theory", President Nixon did indeed order B-52s to fly close to the Soviet border.

But Duns's clever interweaving of the real and the imaginary aside, The Moscow Option is a terrific helter skelter thrill ride in its own right. Paul and Sarah's desperate dash across Russia is utterly gripping, as they're pursued by the police, the army and the GRU, commanded by Paul's former handlers, Yuri and Sasha. The action surges from set piece to set piece – a scene in a Moscow cafe where Paul and Sarah await a contact is a masterclass of escalating tension – punctuated by moments of black humour (some of Dark's snarky asides and sarcastic put-downs are priceless; at one point he finds himself soaking wet and covered in human faeces and debates whether to remove his clothes so as to avoid hypothermia, but decides "a man in wet clothes with shit all over his face would still be more welcome than a naked one") and reflective interludes, as Paul uncovers yet more revelations about his time as a double-agent, especially regarding the death of his father. And though Paul's foreknowledge of the mustard gas strikes one as being perhaps a little too fortuitous, that can ultimately be forgiven both for lending purpose to his role in the story, and because The Moscow Option is so strong overall: to my mind, it's at least as good as the first book in the series, Free Agent, and in some respects is even better. And while its ending is decidedly downbeat, there is a small glimmer of hope, in that Jeremy reports there are further Paul Dark novels to come.

And speaking of Jeremy, next in this series of Duns-shaped posts I'll be reviewing one of his favourite novels – Adam Hall's 1966 Quiller thriller The Ninth Directive – with additional insight from Mr. Duns himself...
Posted by Nick Jones (Louis XIV, the Sun King) at 07:17