The name Jeremy Duns has cropped up on Existential Ennui a considerable number of times over the past year-and-a-half, as spy fiction has come to increasingly dominate my reading and therefore the concerns of this blog. The "Abiding Preoccupations" tag-cloud in the right-hand column suggests there are currently seventeen posts (including this one) featuring Mr. Duns, but I suspect there are still more besides which I've yet to label, and, no doubt, many more to come. Jeremy has been invaluable in the writing of some of my spy fiction blog posts – generous with his time and forthcoming with enlightening additional information on, for example, Len Deighton, Sarah Gainham, Graham Greene and Joseph Hone – and both helpful and encouraging on many others.

But of course, we mustn't forget that besides being an espionage aficionado and a regular contributor not only to Existential Ennui but to many other blogs besides (including his own) – not to mention a journalist of long experience – Jeremy is an accomplished spy novelist in his own right – and this week is as good a time as any to remind us of that salient fact, because Simon & Schuster will be publishing the third novel in his Paul Dark trilogy on Thursday. I reviewed the first novel in the series, the excellent Free Agent (2009), in February of last year, and I'll be reviewing the new book, The Moscow Option, later this week – and then following that up with a review of one of Jeremy's favourite novels, before rounding off this run of Duns posts with something very special indeed.

But first I thought I'd take a look at the second Paul Dark thriller: 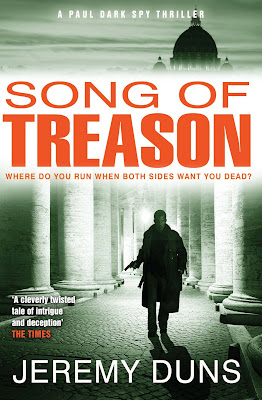 Song of Treason was first published by Simon & Schuster in paperback last year – at least, under that title. Because as Jeremy explains in this blog post, it originally appeared under the title Free Country in 2010, the idea being that each of the three novels in the trilogy would have "Free" in the title (the third book was to be called Free World). Simon & Schuster, however, "felt there was a danger that Free Country might not signal to those who hadn't read the first book in the series, Free Agent, that it was a spy thriller". Jeremy agreed, and came up with the more apposite Song of Treason. (Incidentally, the novel was published as an ebook for the first time last week.) 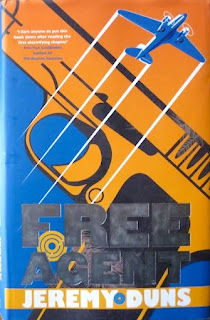 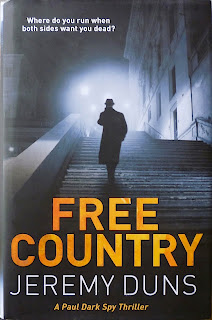 Free Agent opened with one of the best twists I've ever read in a thriller, one which I'm now, out of necessity, going to spoil, so if you haven't read Free Agent yet, I'd advise you to get yourself a copy before going any further. Set in 1969, the book began with Paul Dark, British secret agent, being summoned to the country retreat of the head of the Secret Intelligence Service, Sir Colin Templeton, where he learns that a Russian defector in Nigeria has information about a double-agent at the heart of SIS. As we discover at the close of the opening chapter, that traitor is Dark himself, and he promptly murders Templeton in order to cover his tracks, thereafter jetting to Africa to seek out the Soviet defector.

That rug-pulling twist was always going to be hard to beat in the second book in the series, but Duns does his damndest to top it in Song of Treason, which kicks off shortly after the events of Free Agent, in May 1969. Dark, having regained the trust of his SIS colleagues (or so he believes) and now in line to become Deputy Chief, is delivering a eulogy at Templeton's funeral at St. Paul's when he pauses mid-address, unable to continue. Acting Chief John Farraday approaches the lectern to find out what's wrong, and then falls to the ground, blood "gushing from the centre of his shirt". Farraday has been shot and killed, but Dark quickly surmises that the shot was actually meant for he himself.

From there, the action moves to Rome, as it's believed by Dark's colleagues that Farraday's assassination was the work of an Italian communist group called Arte come Terror. Of course, Dark believes something rather different, namely that his Russian handlers attempted to kill him due to his endeavours in Africa. The truth, however, is even more disturbing, and before long Dark, still suffering from the after-effects of a disease he picked up in Africa, is locked into a battle of wits with a Soviet agent and then abducted and tortured alongside Sarah Severn, the wife of head of Italian station, Charles Servern. 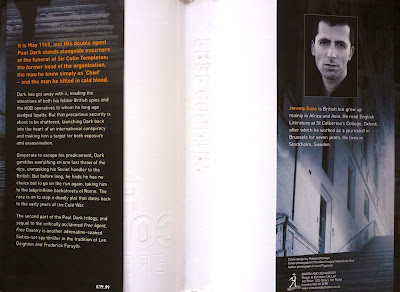 That brutal torture sequence recalls such infamous similar scenes as James Bond's severe grilling at the hands of Le Chiffre in Ian Fleming's Casino Royale or Quiller's attempts to resist a drug-induced interrogation in Adam Hall's The Berlin Memorandum – quite purposefully, Duns being an acknowledged appreciator of both novels – but it's also informed by public school initiation ceremonies – something Duns is personally familiar with, having attended public school as a boy. Indeed, Paul Dark's experiences at school – in particular one brutal episode – in part drive the narrative, alongside his exploits as a mole – especially his recruitment after the war – and the nefarious manipulations of a shadowy right-wing group. As Paul and Sarah embark on a feverish – literally in Dark's case – dash to the Vatican and then Turin, there are double-crosses and violent encounters aplenty, culminating in a jaw-dropping revelation and an unexpected extraction. 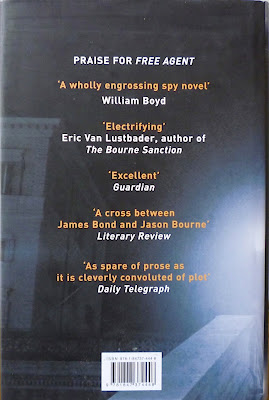 Dark remains as fascinating a creation as he was in Free Agent – duplicitous and willing to go to any lengths to save his own skin, but also questioning (his caustic, often irritable narration is peppered with reflective moments of self-examination), utterly determined to stop the impending atrocity he uncovers, and increasingly dedicated to ensuring Sarah's safety. He's no hero, but some of the things he does are certainly heroic, and his loss of faith in his communist ideals lends him an alluring ambiguity – an agent shunned by all sides, yet still driven to do the right thing. But as thrilling as Song of Treason is – and like its predecessor, it really is up there with the best of Ian Fleming, Len Deighton, Adam Hall, Geoffrey Household, Gavin Lyall, Desmond Cory and countless other past spy fiction masters – the final part of the trilogy is even better, as the stakes are raised to unimaginable levels and Dark finds himself attempting to stop nothing less than the devastation of the entire planet...
Posted by Nick Jones (Louis XIV, the Sun King) at 07:46