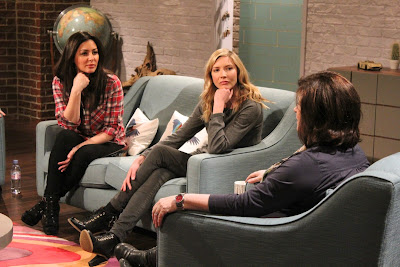 I've never really been one for clubs. Not clubs in the over-imbibing-and-shuffling-about-to-loud-music sense – those I'm fine with: I've spent a substantial proportion of my life in those, and even made a living writing about them for eight years. No, I mean clubs as in the ones you join – like, say, after-school clubs (I did briefly flirt with a nascent comics club at school, but it was frowned upon by the teachers and never made it past its inaugural meeting), or organisations like the Cubs and the Scouts and the Brownies and the Guides (I was a Cub for a year; my mother made me go; the only badge I succeeded in attaining was the one you get for turning up each week – not by choice, obviously – and on a weekend camping trip I managed to get lost orienteering), or gentlemen's clubs (never been recommended for one, don't ever expect to be). Or, indeed, book clubs.

Book clubs have been big news for a while now, with groups of passionate readers gathering in coffee shops and pubs and living rooms up and down the land in order to discuss the finer points of plot, character and theme in their favourite novels – or, based on the evidence of a friend of mine, to simply get drunk on wine and shout at one another. Given the non-joining tendencies outlined above, you'll be unsurprised to learn that book clubs have largely passed me by – I'm far happier pontificating at extreme length in splendid isolation in the magnificent gated community that is Existential Ennui – but even I haven't failed to notice the leap to television of book clubs, with Oprah, Richard and Judy and, latterly, Channel 4 and More4's The TV Book Club. So when I was contacted out of the blue by the publicity team behind The TV Book Club, asking if I'd like to attend a recording of the show, I was at least (very) dimly aware of what they were on about. 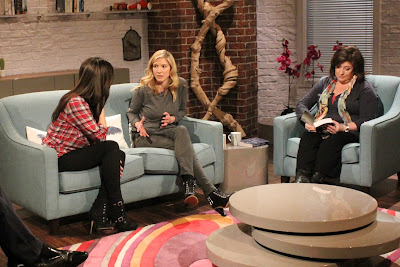 Naturally, being, as I am, a misanthropic shut-in – and having barely watched the show – it was touch-and-go as to whether or not I'd accept the invitation. But I had nothing better to do on the Thursday evening in question (ingrate? Moi?), and I figured it'd give me the chance to take the afternoon off work and plunder the secondhand bookshops of Cecil Court before heading to the recording, so having bought a stack of first editions, I trotted along to Cactus Studios in Kennington at the appointed time.

Cactus Studios, it turns out, is also where ultimate weekend loafer programme Saturday Kitchen is filmed – on the same stage as The TV Book Club, natch – and as befits its name its swish, stark foyer is populated by a tasteful selection of cacti. It was also populated on this occasion by a handful of other books bloggers, all of whom had accepted similar invitations to mine, all of whom were seemingly avid viewers of the show, and at least one of whom had read all ten of the novels under discussion in this latest series – whereas I had read none (although I do have a first edition of S. J. Watson's Before I Go to Sleep still waiting to be cracked).

One thing I became acutely aware of over the course of the evening was how bloody weird Existential Ennui is in comparison to most books blogs. I mean, in the circle of blogs with which EE intersects and interacts – Olman's Fifty, Book Glutton, Pretty Sinister Books, Pattinase, The Rap Sheet and so forth – Existential Ennui isn't especially atypical: a little on the verbose side, and probably still idiosyncratic, but at least concerned with similar subjects, i.e. old genre books. But compared to the vast majority of books blogs, which generally concentrate on reviewing new fiction and are courted by publishers and invited to blogging events and parties – blogs which, in other words, perambulate along gaily on the publishing publicity treadmill – Existential Ennui is decidedly odd.

If this was evident from the polite chat in the foyer, it became even more glaringly obvious in the Green Room before the recording, where all of the bloggers stood round in a ring and were invited by the publicity team to describe their blogs. My explanation of EE's modus operandi – "It's mostly about classic spy fiction and crime fiction, some reviews but more book collecting, cover art, that kind of thing" – was met by mystified stares, but thankfully I was spared further fumbling explication when a production assistant arrived to usher us into the studio. 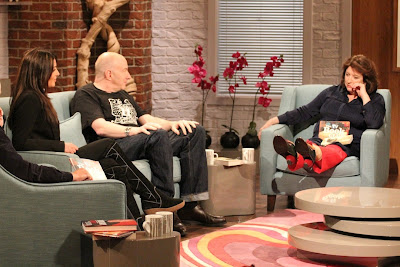 The show we were about to watch was the final one in the series, and would be dealing with the tenth book in the run, Alexander Maksik's You Deserve Nothing, a Camus-indebted, Paris-set novel about an illicit affair, which is about as far from Existential Ennui's abiding concerns as you could get, although it does, perhaps, shed light on how my invitation came about: I suspect someone at The TV Book Club's publicity team googled "existential fiction" in their search for suitable bloggers and ended up at my door. But if my presence was somewhat incongruous, the special guest on the show was equally so: Blur bass-player-turned-organic farmer Alex James, who, while ostensibly there to talk about Maksik's novel, was actually there to plug his new cheese-making memoir.

James was joined by regular guests the actresses Caroline Quentin and Laila Rouass and the comedian Rory McGrath (the photos illustrating this posts are from a previous series if you're wondering where McGrath and Alex James are), and the discussion was lively and entertaining, although the between-takes chat was, for me, more diverting: McGrath and James debating their favourite cheeses; Quentin ruminating on her ideal farm and finding common ground with McGrath in banjo-playing. There were the expected and amusingly sweary "fluffs", including one eruption of "balls, arse" from Quentin, followed by a beseechment to the watching bloggers to "please don't report that" (oops). Quentin also noticed "someone sitting in the audience tweeting", which was actually me scribbling in my notebook, something which, again, marked me out from the crowd (nobody else appeared to be taking notes).

Unlike a lot of television recordings, which often go on for hours, The TV Book Club is a tightly run ship, and it only took around half an hour before we reached the pick-ups, one of which required James to nod silently while Rouass intoned "The Sister Brothers is a good read", Caroline Quentin sympathising with James afterwards that it's "not much fun being on the arse end of a sentence". Shortly after that Quentin was afflicted by the giggles whilst attempting to deliver a line, and had to hand it over to McGrath, who promptly buggered it up himself, accompanied by a hearty "oh fuck". 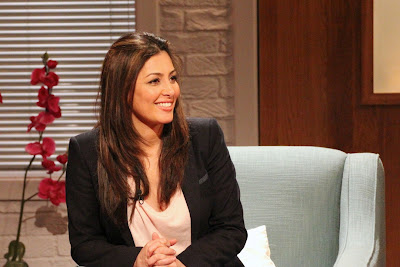 And then we were done, and after Quentin and Rouass were both presented with bunches of flowers to mark the end of the series (none for McGrath or James, sadly), we all retired back to the Green Room, where wine and beer was made available and some of the more earnest bloggers went into an intense-looking group huddle. I got chatting instead to a nice man named Will, who handles the graphics at Cactus and who, it transpired, is also in a New Order tribute band. Needless to say, I was the last blogger to leave, suitably "refreshed" and clutching my goody bag of signed paperback copies of some of the books covered in the series. I'm still not sure what to do with them, to be honest. Perhaps I'll run a competition and give them away.

But anyway: it was a thoroughly pleasant evening, and though I'm still of the belief that my invitation was the result of a minor misunderstanding, it was lovely to be asked, and I'd like to thank Tommy and all at MEC for extending the invite. And should you wish to watch the show I attended, it'll be on More4 on Sunday night (8 April) at 7.20pm.

Next on Existential Ennui: Jeremy Duns and Paul Dark...
Posted by Nick Jones (Louis XIV, the Sun King) at 07:57