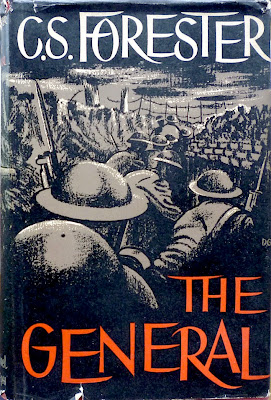 Well I must say the response to my new Existential Ennui permanent page, Beautiful British Book Jacket Design of the 1950s and 1960s, has been fair overwhelming. The link I tweeted to the gallery last week was retweeted to buggery – thank you to everyone who took the trouble to RT, especially Alexis Petridis (of The Guardian) and Margaret Atwood (yes, that Margaret Atwood) – with the net result that the page has received well over a thousand hits (er, make that 1,500... no, wait: 2,000... oh I give up) already. But it is, as I mentioned, an ongoing project, and so I'm pleased to announce nine new additions – some of them dustjackets by designers who are already part of the gallery – witness the Donald Green cover above – others by designers who heretofore haven't been, and still others that are brand new to Existential Ennui – bringing the total number of jackets currently on display up to thirty.

The above cover for C. S. Forester's The General may indicate that there are also a number of non-genre jackets in this batch, but that shouldn't, however, be taken as evidence that I've run out of crime or spy fiction wrappers to introduce to the gallery: I'm still mulling further additions from my collection, plus there are a number of books I'm keeping in reserve until I find the time to blog about them properly. (There are some nice surprises in store for regular readers, and I'd rather not spoil them.) There are also a handful of jackets which I've re-photographed from their original appearances on Existential Ennui (these are the lengths I go to for you, dear reader; I hope you're grateful). See if you can spot the new additions.

Coming up next here on the main blog I'll have a Violent World of Parker cross-post: a review of an early Donald E. Westlake novel, the dustjacket of which features in the Beautiful British Book Jacket Design of the 1950s and 1960s gallery...
Posted by Nick Jones (Louis XIV, the Sun King) at 05:27