Slight change of plan here: I had intended to post a Westlake Score this week, but I've decided to hold off on that for the moment – partly because on a whim I actually started reading the Westlake Score in question, and so I might as well delay blogging about it until I've finished it, at which point I'll be able to review it as well as drone on drearily about its scarcity (which, depending on your point of view, could either be a good thing or a bad thing); partly because it fits in with a series of posts I have planned, and I'm not quite ready to begin that series yet; but also because I realised there's another Westlake novel I've yet to review, one which I read ages ago but for some reason never posted anything substantial about: Killy. 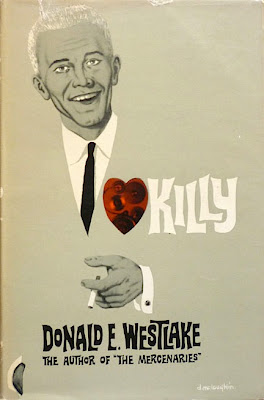 It was whilst I was assembling my new, permanent Existential Ennui page, Beautiful British Book Jacket Design of the 1950s and 1960s (which is off to a cracking start, having been linked to via tweets by Alexis Petridis of The Guardian and writer Margaret Atwood) that I realised I hadn't yet reviewed Killy. First published in the US in 1963, it didn't make its debut in the UK until the following year, when T. V. Boardman published it as part of their American Bloodhound Mystery line (no. 454), under one of the best dustjackets Boardman's in-house designer, Denis McLoughlin, ever created for a Westlake novel. Indeed, legend has it that that's actually McLoughlin himself on the front cover you can see above – which is possibly why the Boardman edition is so scarce: there are currently no copies of it for sale online. 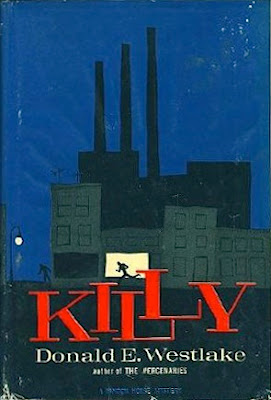 Killy was Donald E. Westlake's fourth novel under his own name, and is the first-person account of one Paul Standish, a trainee at the American Alliance of Machinists and Skilled Trades union (an organisation which, in one of Westlake's self-referential nods, also merits a mention in the later Richard Stark/Parker novel Butcher's Moon). Paul is wet behind the ears but eager to learn, so when a junior executive named Walter Killy takes Paul under his wing, Paul is more than happy to follow Killy's lead. Killy takes Paul to the small town of Wittburg to assess an application from the workers at the McIntyre Shoe Co. plant to join the AAMST, but when the pair get to Wittburg they encounter a decidedly frosty reception: they're arrested, assaulted, and accused of shooting and killing Charles Hamilton – the McIntyre worker who invited them to the town. 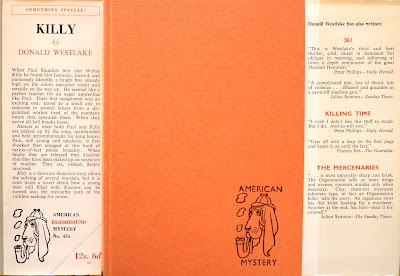 Before the story's done there'll be another corpse lying alongside Hamilton in the Wittburg morgue, but despite its murder mystery trappings, Killy is less a whodunnit than a portrait of corruption and double-dealing. Paul soon learns that the affable Killy is a seasoned operator, working for his own benefit and advancement as much as, if not more than, the union's, and happy to take another person's credit – i.e., Paul's – if it suits his purposes. Indeed, the picture Westlake paints of unionism isn't especially flattering – rife with self-interest and run by hard-nosed types more than ready and willing to mix it up if needs be.

The ultimate corruption, however, is of Paul himself. At the outset of the story he's naive and square, but he's a fast learner, and his eventual "revenge" on Killy is as cold-hearted as the actions of any other of the colourful characters who populate the novel. Of all those participants, it's George, the union "protector" – who calls Paul his "little friend" – who is the one player who understands just what Paul is capable of – and just how far and high he'll eventually go in the union. 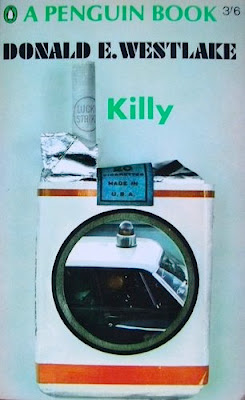 Westlake's position as an acknowledged master of crime fiction often obscures the fact that many of his books are only crime fiction by decree. Like his near-contemporary, Ross Thomas – who also wove politics and its attendant corruption into what were ostensibly crime and spy thrillers (see The Porkchoppers for a similarly scathing take on unionism, but also The Fools in Town Are on Our Side, Chinaman's Chance and many other tales of wholesale corruption) – Westlake was as interested in the failings and foibles of ordinary folk as he was in the mechanics and intricacies of truck heists or bank jobs (or bloodbaths). As a protagonist, Paul Standish may not be the most memorable of Westlake's creations... but as a person – as a weak, ambitious, all too-human man – he's probably more true to life than the more exotic likes of Parker or Grofield or Dortmunder. In that sense, then, while less exciting than others of Westlake's novels, Killy is perhaps more representative of urban America in the early 1960s – and, no doubt, can still tell us much today.

Coming up next on Existential Ennui: over the Bank Holiday weekend I'm hoping to post something about my recent visit to Channel 4's The TV Book Club, but after that... it's the return of Paul Dark...
Posted by Nick Jones (Louis XIV, the Sun King) at 08:48