From a 1939 British first edition (third impression) of thriller writer Geoffrey Household's third novel, Rogue Male, we move on in this series of Household posts to his third-from-final novel – a book which is, in fact, a direct sequel to that hands-down classic, but published over forty years later: 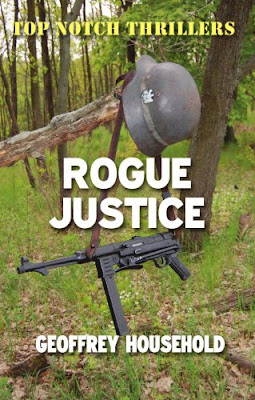 Rogue Justice originally appeared in 1982, published in the UK by Michael Joseph – I blogged about that edition back 2010. The cover seen above, however, isn't that edition; it's the Top Notch Thrillers reissue, published by Mike Ripley's imprint in 2011 – just one of many overlooked thrillers that Mike has brought back into print. And it's great that Rogue Justice is widely available again, because even though it doesn't scale the lofty literary/thriller heights of its illustrious forebear, it's an intriguing novel nonetheless.

For a start, whereas in Rogue Male the identity of the European dictator the narrator attempted to assassinate at the beginning of the novel was never revealed, in Rogue Justice it's plainly stated that it was indeed Adolf Hitler. Not a huge or especially startling revelation, I know, but remember that Rogue Male was written and first published in peacetime, so basing a character on Hitler was pretty daring, even if he wasn't named. But we don't just learn the identity of the dictator in Rogue Justice: we also learn the name of the narrator of both novels. In Rogue Male, we're given to understand that our protagonist is noble enough in heritage that he's well-known in Britain, but we aren't told his name. In Rogue Justice, his name is finally revealed: Raymond Ingelram. (Curiously, in his 1977 survey Who's Who in Spy Fiction, Donald McCormick calls the narrator of Rogue Male "Sir Robert Hunter" – influenced, no doubt, by the 1976 Peter O'Toole BBC TV adaptation – an error he then repeats for his 1990 follow-up, Spy Fiction: A Connoisseur's Guide, published eight years after Household had named his lead Raymond Ingelram!) 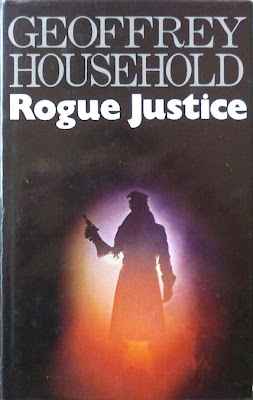 Rogue Male ended with Ingelram determining to take another crack at killing Hitler – whose thugs murdered Ingelram's one true love – having survived a perilous pursuit by agents of Nazi Germany, in particular the cunning and savage Major Quive-Smith (or von Lauen, to give him his true name). Rogue Justice picks up his story four years later in 1942, and finds Ingelram languishing in a Rostock prison cell. As he explains, he used Quive-Smith's Nicaraguan passport – issued under the name Don Ernesto Menendez Peraza – to try and inveigle himself into German society as a Nazi sympathizer, in the hope of getting close enough to Hitler to off the bugger, but was unmasked and banged up instead. But a fortuitous RAF raid destroys the gaol in which he's being held, and he makes his escape, dressed as his now-dead captor, Hauptmann Haase.

From there, the action ranges across Nazi-occupied Europe, as, realising that he'll never be able to assassinate Hitler, Ingelram embarks instead on a quest to exact a different sort of vengeance. Effectively, he turns himself into a one-man army, falling in with the occasional resistance or guerilla movement, attacking German troops where he can, notching up a steadily increasing number of kills. In that sense, then, Rogue Justice is less focused than Rogue Male. In the former novel, Ingelram's aim was simple: to evade the enemy agents on his tail. In Rogue Justice, however, he becomes by turns pursuee, then attacker, then pursuee again, with no real purpose beyond slaughtering as many Germans soldiers as he can (and perhaps returning home to England).

But while Rogue Justice lacks Rogue Male's elegantly streamlined plot and consequent escalating tension, it does work as a kind of wartime travelogue, offering glimpses of life in occupied Poland (Ingelram has a near-brush with Auschwitz), Slovakia, Romania and Greece. And Ingelram remains an agreeable companion: resourceful (his long experience as a hunter comes in very handy here), obviously aristocratic yet never patronising towards the many downtrodden locals he meet, his observations are often barbed with a sly, witty sarcasm (Mike Ripley has written about how in Rogue Justice Household "has perfected the cool, very British (English) attitude of self-deprecation when under fire"; see this excellent Crime and Detective Stories article on the TNT/Ostara website). 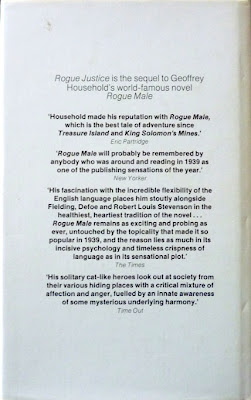 Quite apart from its intriguing revelations as to the identity of the narrator of the novel (and its predecessor) and his intended target, Rogue Justice is interesting bibliographically too. The gap of forty-three years between the publication of Rogue Male and Rogue Justice must surely rank as the longest between a novel and its sequel (written by the same author) in publishing history (don't just take my word for it: Mike Ripley reckons that's the case as well). Then there's the fact that Rogue Male gained a sequel at all: Geoffrey Household didn't, as a rule, write sequels, and only one other novel in his canon besides Rogue Male was awarded a follow-up – although in that case the length of time between the two books was considerably shorter.

I'll be returning to those two novels later in this run of Household posts, but next I'll be looking at the two novels which precede Rogue Justice in Household's backlist – both of which boast cover designs by the same photographer-turned-professional fisherman responsible for the jacket photo on the Michael Joseph edition of Rogue Justice...
Posted by Nick Jones (Louis XIV, the Sun King) at 08:52