Geoffrey Household is chiefly remembered these days for his novels – in particular his 1939 classic thriller Rogue Male – but he was also a prolific writer of short stories. He had seven collections of short stories published, many of which originally appeared in periodicals like The Atlantic Monthly and Argosy, but it was the second of those collections which, for Household, held a special significance. 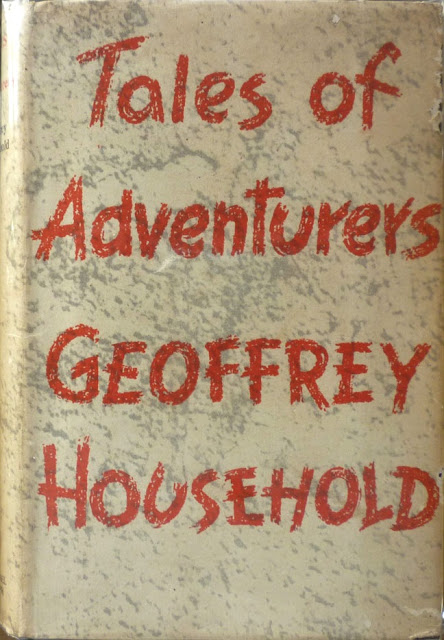 Tales of Adventurers was published in hardback in 1952 by Little, Brown in the States and Michael Joseph in the UK – that's the Joseph edition you can see above. According to crime writer and critic Mike Ripley – who, of course, has resissued two of Household's novels under his Top Notch Thrillers imprint – of all the novels, novellas and short story collections Household published – thirty-six in total – the author "always maintained that the one book he wanted to be judged by was his anthology Tales of Adventurers".

It's remarkable, then, that the Little, Brown and Michael Joseph first editions remain the only printings of the book. The Little, Brown first is fairly easy to come by at present (if you're in the States) – AbeBooks currently has eleven copies listed for sale – but the Joseph first is extremely uncommon: I bought the only copy on AbeBooks, which means there are, right now, no copies available. (There are two copies listed on Amazon Marketplace, but I suspect they might be "phantom" listings, and they're very pricey anyway.) The dustjacket design is uncredited, but it reminds me a little of the (similarly uncredited) jacket for the 1955 Heinemann first edition of Grahame Greene's The Quiet American.

The stories in Tales of Adventurers run the gamut of themes and genres, from spy thrillers to historical romps, from the poignant to the comedic, from wartime vignettes to tales with a touch of the supernatural. I haven't read all of them yet – the book only turned up in the post the other day – but those I have read are utterly beguiling. The opening story, "First Blood", details the Mediterranean sea voyage of Mr. Avellion, a civilian businessman recruited by the British Board of Trade on the eve of World War II by dint of his supposed familiarity with Alexandria in Egypt. But Mr. Avellion, "pear-shaped" and with "a powerful nose sprouting blue-grey buds like a tree in winter", hadn't reckoned on the lack of alcohol on the long, overcrowded cruiser passage, and soon the crossing becomes for him a DTs-induced hallucinatory nightmare.

"Culture" takes place slightly later in the Second World War, and finds a Greek waiter shivering in a snowbound Albanian valley awaiting an attack on the Italian outpost above – an attack which climaxes with a surprising and strangely cheering exchange of polite pleasantries. "Woman in Love", meanwhile, deals with a rather colder war, in which a spymaster of Greek origin named Theotaki operating in Roumania is forced at short notice to enlist the aid of a female agent who's due to be married in Sweden, exhorting her to memorize Russian troop movements and pass on the information. But the woman, Alexia – codename D17 – is naturally preoccupied by her impending nuptials, leading to an oversight so potentially perilous it's almost funny.

One story, "The Picket Lines of Marton Hevessey", takes the form of a letter of reference, written to an American security official as a spirited defence of the extraordinary eponymous Hungarian who became a Jew to spite the Nazis, a Baron to vex the communists, and has now, in the wake of Senator McCarthy's accusations (although these are never directly referenced), been asked whether he was ever a Red. Needless to say, Hevessey's response is as trenchant as the exploits depicted in the letter would suggest. Another story, "The Pejemuller", is set in a Spanish fair ground, where two proud Basques enter into an argument with the Andalusian proprietor of a booth displaying what appears to be a live mermaid ("pejemuller" translating as "fish woman") – a disagreement which can only be resolved by an honourable act of vandalism and liberation.

Reading these stories, one begins to understand why Household held this collection in such high regard. The tales are populated by lightly sketched but wonderfully vivid and colourful characters, set in recognizable European locales – evidently informed by the widely-travelled Household's familiarity with them – and grounded in (largely) realistic events, yet laced with irony and a wry wit and told in an engrossing, absorbing fashion. One of the stories, "Brandy for the Parson", was even turned into a film in the year of publication, starring James Donald, Kenneth More, Jean Lodge and Charles Hawtrey. It's a wonderful comic fable, featuring a troop of minor crooks who disguise themselves as the in-training British Imperial Andean Exploration Society in order to explain the Exmoor ponies they're using to carry smuggled brandy into Dorset – a ruse that eventually takes on a life of its own. 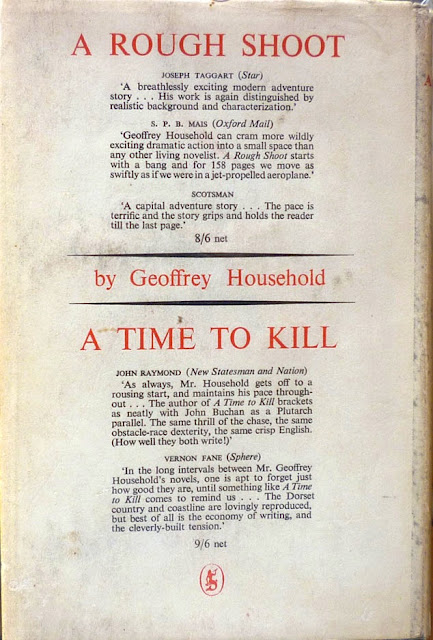 The back of the jacket of this Michael Joseph edition features an assortment of notices for the two books which preceded Tales of Adventurers – both novels, one a sequel to the other – the only time, apart from the much later Rogue Justice, that Household ever wrote a sequel. And it's those two novels which will form the basis of the final pair of posts in this series on Household – both of them in rather lovely British editions...
Posted by Nick Jones (Louis XIV, the Sun King) at 07:03