To round off this series on British writer Geoffrey Household – author, lest we forget, of Rogue Male – I have a pair of posts on two short novels written and published in quick succession in the early 1950s – one a sequel to the other, both detailing the espionage exploits of one Roger Taine. And the first of those two novels is this: 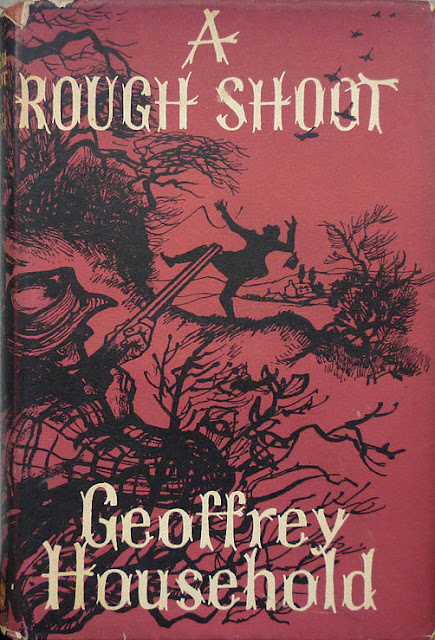 A Rough Shoot was first published in the UK in 1951 by Michael Joseph (and that same year in the US by Little, Brown), under a dustjacket designed by painter and illustrator Patrick Gierth (who also designed the jacket for the 1951 Joseph first of John Wyndham's The Day of the Triffids). Originally written as a serial, it was penned in the wake of the two Middle East-set novels, Arabesque (1948) and The High Place (1950), which Household produced when he returned to writing fiction after World War II. (Following a stint in Romania for British Military Intelligence at the start of the war, Household served as a Field Security officer in the Middle East.) Neither novel matched the success of 1939's Rogue Male, however, and so, as Mike Ripley reports...

...with no income and a new family to support, [Household] "plunged for pure speed and imagination, and produced a commercial thriller called A Rough Shoot in the hope of selling it for a serial in America" where it was indeed bought by the Saturday Evening Post. Although he at first opposed the idea of publishing the story as a book (its length is just over 40,000 words), he was persuaded, the film rights were snapped up and a sequel, A Time to Kill, rapidly followed with the result, as he wrote in 1957, "that I was typed as a thriller writer, and not a very good one at that." (Crime and Detective Stories #61, November 2011) 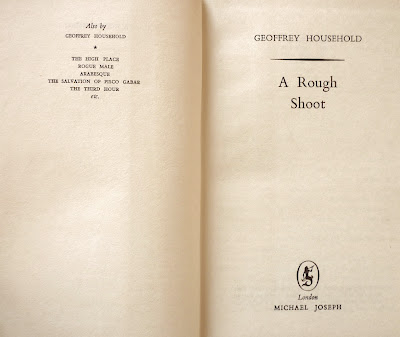 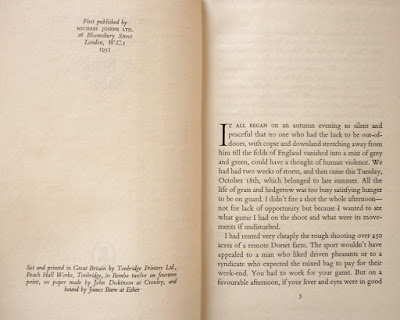 That last self-deprecatory remark must be taken with a healthy pinch of salt, as anyone who's read A Rough Shoot can attest: it is as pure a thriller as a person could wish for. The narrator is the aforementioned Roger Taine, a Dorset salesman who rents 450 acres of rough shooting from a local farmer, killing game "purely for the pot". One autumn evening Taine is out on the shoot when he spies two men who he takes to be commercial poachers. Taine decides to teach them a lesson, and so from a range of eighty yards lets one of them "have a charge of No. 5 shot in the seat of the pants". Unfortunately, the man falls on a strange broad spike he'd been laying on the ground, and is killed. The man's companion flees, and Taine is left with a corpse on his hands.

From there, the story takes on the trappings of a spy thriller, as Taine comes under suspicion by Robert Heyne-Hassingham, founder and leader of the People's Union, "a sort of Boys' Brigade for grown-ups, full of Ideals, Service and Religion", all of which quasi-fascism is anathema to Taine (and indeed to Household). Evidently it was one of Heyne-Hassingham's men that Taine inadvertently murdered, and before long Taine is enlisted by a Polish general named Peter Sandorski to thwart the fascist plot which quickly unfurls... 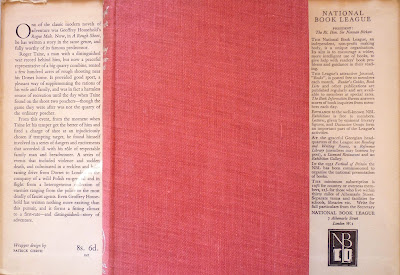 A Rough Shoot may have been written in haste for a cheque, but it's that very haste which lends the novel(la) its frantic pace. The story barrels along in a giddying fashion, barely pausing from incident to incident and all culminating in a mad dash for London by road and rail. But Household still finds time to paint a vivid picture of postwar English rural life. The author's persistent theme of the wild countryside as a place of refuge, so memorably depicted in Rogue Male when the anonymous hero-narrator – later named Raymond Ingelram – goes to ground in his burrow in Dorset, is evident here too: Taine clearly views his shoot as his haven – and woe betide anyone who disturbs it. But Household also includes wonderful, fleeting vignettes of country living, with all its peculiarities and idiosyncracies. Early on Taine lunches "at a remote pub overlooking the Blackmoor Vale, where the landlord, who was a friend of mine, always had something solid to eat which food controllers had never heard of. On this occasion it was a badger ham, and very good it was." 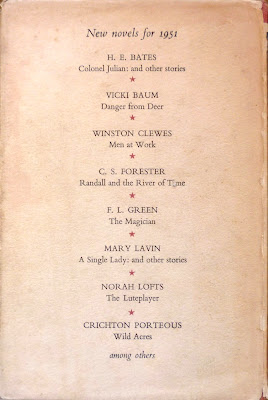 A Rough Shoot is easily one of the most breathlessly exciting books I've read this year. But by all accounts the final book I'll be blogging about in this run of Geoffrey Household posts – A Time to Kill, the direct sequel to A Rough Shoot (the only sequel, aside from the much later Rogue Justice, that Household wrote) – is just as exciting. And in the edition in which I'm showcasing it, it boasts a dustjacket designed by an artist and author I recently had the great pleasure to meet...

(Incidentally – and apropos of nothing; A Rough Shoot has no real bearing on this, beyond the fact that it's one of my favourite novels of the year so far – today is my birthday. Therefore, considering you didn't get a blog post on my birthday last year – merely a preview and review – think yourselves lucky you're getting one this year – and on a Sunday, too!)
Posted by Nick Jones (Louis XIV, the Sun King) at 05:14