Dan J. Marlowe and Earl Drake, 1: The Name of the Game is Death (alias Operation Overkill)

(NB: This post also appears – with comments – on The Violent World of Parker blog.)

In 1962, one of America's leading genre publishers issued a paperback original by an author who'd only been a novelist a few years, but already had a handful of successful, critically praised crime works under his belt. Starring a violent career criminal who operates under various aliases and is respected in the underworld for his ability to plan and take down dangerous scores, the book was stunning: gripping, edgy, original. The author had no intention of penning a sequel to the novel – indeed, his leading man almost dies at the end of the story – but after some encouragement from his publisher he elected to extend his memorable antihero's literary life into a series. Armed with a new face following plastic surgery, the cunning and lethal criminal would go on to execute a number of spectacular heists (some of them going spectacularly awry), find himself pitted against mobsters and gangsters, and even wind up working for the US government.

So far, so familiar, at least to fans of Donald E. Westlake's pseudonymous Richard Stark/Parker novels. Except it's not Stark we're talking about here, or Parker, or The Hunter/Point Blank; it's Dan J. Marlowe, Earl Drake... and The Name of the Game is Death. 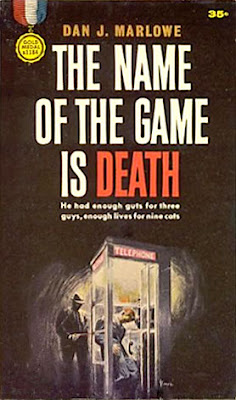 Published in the States in the same year as The Hunter by Gold Medal – who would eventually pick up the rights to the Parkers after Pocket Books issued the initial eight – The Name of the Game is Death – later retitled Operation Overkill – was Dan James Marlowe's seventh novel (his debut, Doorway to Death, featuring hotel detective Johnny Killain, was issued by Avon in 1959), but the first to star Earl Drake. Drake isn't actually called Drake for the bulk of the novel (and may, in fact, never once be called that in the original printing of the book... I'll return to that shortly) – "Earl Drake" is merely a name he gives to an associate – but after this initial outing the Drake alias would stick.

Written in the first person from Drake's perspective (and here we encounter an essential difference to the third-person Parker series), The Name of the Game is Death begins in the midst of a robbery, as Drake, his partner in crime Bunny, and a young kid doing the driving hit a Phoenix bank. It's a blistering opening to the book: tense, chaotic, and climaxing in a bloody shootout in which the kid is killed ("The left side of his head was gone") and Drake is wounded. Drake and Bunny split up, Bunny taking most of the cash, with the intention of mailing Drake his share at the rate of a thousand dollars per week. But after three packages the deliveries stop, so Drake sets off to Hudson, Florida to find out where his share of the money is and what happened to Bunny. 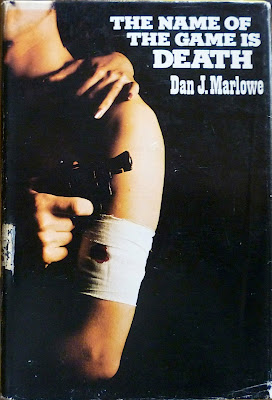 If the blood-soaked opening of The Name of the Game is Death isn't indication enough, it quickly becomes even more apparent that Drake is a very bad man indeed. A hapless doctor who Drake forces to tend to his injury meets a sticky end, and Drake's trip to Hudson involves another murder and sets up more to come. Interspersed amongst all this are flashbacks to Drake's youth and young adulthood, via which we learn just how fucked up an individual he is: as a child he mercilessly tormented a fat kid who'd killed his cat and exacted a bruising vengeance on a corrupt cop, and by the time he was twenty-three he had already killed two men.

The picture of Drake that emerges isn't a million miles away from, say, Lou Ford in Jim Thompson's The Killer Inside Me (1952) – and this is the key to The Name of the Game is Death. Much as Ford is the driving force behind The Killer Inside Me, compelling even as he repels, Earl Drake is the reason The Name of the Game is Death is so powerful (I made it my number one read of last year). Dan J. Marlowe isn't much of a stylist, but Drake is so fascinatingly monstrous it's hard not to root for him. And once Drake, now calling himself Chet Arnold, gets to Hudson (setting himself up as a tree surgeon while he investigates Bunny's disappearance), we learn he also has problems getting it up; his first attempt to make it with a buxom redheaded bar-owner named Hazel ends in flaccid disappointment. 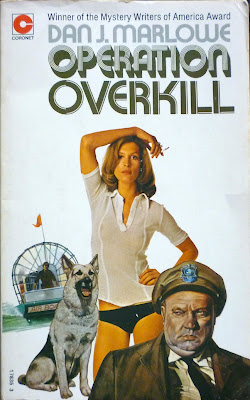 Reportedly, the original edition of The Name of the Game is Death implicitly links Drake's eventual sexual success with Hazel to his taste for killing, although this inference is removed from later US and UK editions. And that's not the only change, either; I've only read the 1973 UK Coronet printing of the book (retitled Operation Overkill), but this post on the Mystery*File blog details some of the other alterations. Although the majority of these seem to be simple copy edits (and actually improvements in many cases), it may well be that the name "Earl Drake" was inserted at a later date, too.

As to why Marlowe made these changes to his text... I'll be exploring that over the course of the rest of this week's posts. Because it would be seven years before Chet Arnold/Earl Drake reappeared, by which point Dan J. Marlowe had become friendly with a real-life criminal who would help to shape the remainder of the series... and despite the allusions at the beginning of this post, that series would end up taking quite a different path to that of Richard Stark and Parker... 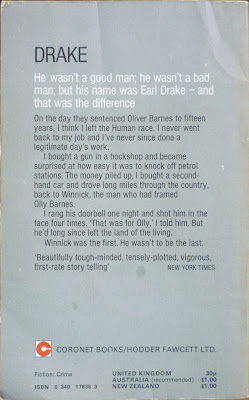