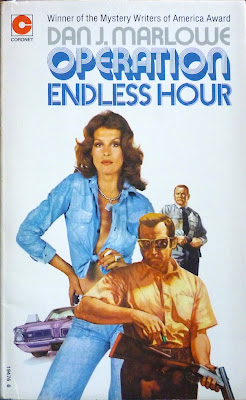 Seven years after ruthless career criminal (and Parker parallel) Earl Drake made his debut in Dan J. Marlowe's violent, twisted The Name of the Game is Death (Gold Medal, 1962), Drake returned to print in a new full-length novel. Except now things were different for both Marlowe and Drake... and they were about to take a turn for the bizarre...

Dan J. Marlowe had continued to write in the wake of The Name of the Game is Death – indeed, for many, the years 1962–1969 marked the high point of his crime fiction writing career, encompassing standalone classics like Strongarm (1963), Four for the Money (1966) and The Vengeance Man (also 1966); see "Playing with Fire" and "The Gold Medal Corner" by Josef Hoffman and Bill Crider on the Mystery*File site. But Marlowe had also become friends with a real-life convicted criminal: Al Nussbaum. Nussbaum had read The Name of the Game is Death whilst on the run from the FBI following a string of bank robberies with his partner Bobby Wilcoxson, and was duly impressed; he wrote a number of letters to Marlowe (using the alias "Carl Fisher"), and once imprisoned (sentenced to forty years, he was paroled in the early 1970s), Nussbaum kept up his correspondence with Marlowe.

The result was an (unpublished, I believe, due to FBI objections) article titled "Anatomy of a Crime Wave", detailing Nussbaum's exploits. But what Nussbaum – and, it must be said, Marlowe's publisher, Gold Medal – really wanted to read was a sequel to The Name of the Game is Death. According to Josef Hoffman's Mystery*File piece, "Nussbaum suggested to Marlowe that he go through the novel for him, looking out for the elements which constituted the figure of the hero, and for ways in which the story might be continued. Nussbaum then produced an outline of the character for the series, gave him a name, and drew up a 60-page concept for the sequel." The name Nussbaum came up with was Earl Drake. (Presumably this means the couple of mentions of the Earl Drake alias in later editions of The Name of the Game is Death/Operation Overkill must have been inserted as part of the revisions and edits the novel underwent – see previous post.) 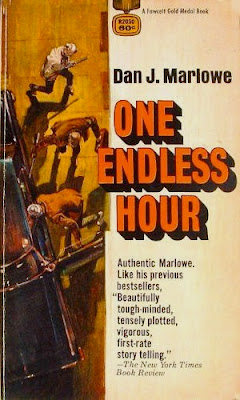 Marlowe wrote the sequel "in three weeks flat", and Earl Drake was reborn in One Endless Hour (1969, later retitled Operation Endless Hour). When we left Drake in The Name of the Game is Death, he'd been burned to a crisp in a car-related conflagration after a shootout with the cops and landed up in prison hospital, wrapped head-to-toe in bandages, in terrible pain but utterly unrepentant. Handily, One Endless Hour recaps these final moments (again, slightly rewritten), and then picks up the story with Drake still on the prison ward, beginning to plan a breakout. This first part of the novel is perhaps the best, and plays like a fucked-up One Flew Over the Cuckoo's Nest (as in, Ken Kesey's 1962 novel), with Drake taking the role of Chief Bromden, narrating events while everyone on the ward believes him to be a vegetable

Enlisting the aid of the plastic surgeon who reconstructs his ruined face (shades of Richard Stark's Parker in The Man with the Getaway Face there, although the surgeon is unable to reconstitute Drake's hair; henceforth he has to wear a wig), Drake eventually effects his escape (leaving behind one corpse, naturally) and goes looking for the money he never managed to recover in the first book. The cash is long gone, however – although Drake does get to tie up one loose end – and so, short on funds, Drake seeks out Robert "the Schemer" Frenz, an underworld figure who provides ready-to-go plans for bank jobs "for a fee or a percentage of the gross". The resultant robbery (or rather, robberies) takes up the remainder of the book, providing a fair bit of excitement and climaxing, in a spooky echo of the previous book's finale, in a flaming car crash (Josef Hoffman's Mystery*File article draws attention to the repeated reappearance of fiery motifs in the Earl Drake series).

That One Endless Hour isn't quite the equal of The Name of the Game is Death perhaps won't come as a huge surprise – few books by any crime novelist scale those lofty heights – but it's still an effective crime thriller, and Drake is as compelling – and repulsive – a creation as ever (although not quite as murderous here). In "the Schemer" one can detect Marlowe and Nussbaum trying out a possible series character, setting up potential sequels... but in fact after this point the series would start to diverge from the blueprint it had established, gradually leaving crime fiction behind and veering into a whole other genre... 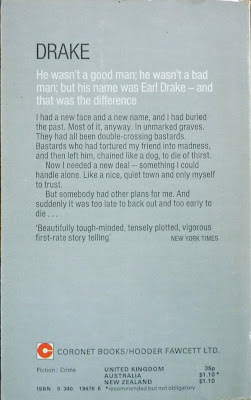