Much as Donald "Richard Stark" Westlake had done in his eighth Parker novel, The Handle (Pocket Books, 1966), with the third Earl Drake thriller, Operation Fireball (1969), Dan J. Marlowe turned his narrator-protagonist from a violent career criminal into a reluctant operative for the US government ("The man with nobody's face", as Drake became known, due to the plastic surgery he'd undergone in his second outing, One Endless Hour). But unlike Parker, for Earl Drake this vocational change was to become effectively permanent, and much of the remainder of his literary career (the twelfth and final Drake novel, Operation Counterpunch, was published in 1976) would be directed by his new "handler", Treasury Agent Karl Erikson. 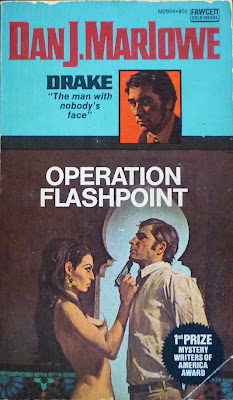 Whether this switch to spy fiction was at the behest of Marlowe's publisher, Gold Medal, as Josef Hoffman (among other Marlowe commentators) suggests (see the Mystery*File article "Playing with Fire"), or the influence of Marlowe's friend – and by-this-point collaborator – the convicted criminal Al Nussbaum, or indeed simply a literary choice, I'm not in a position to determine for certain. Hoffman reasons in his piece that Gold Medal pushed Marlowe in the direction of the espionage thriller because the publisher was already home to another series starring an unrepentant criminal – the aforementioned Parker, whose initial outing, The Hunter, was published in the same year (1962) as the debut Earl Drake novel, The Name of the Game is Death – and consequently Gold Medal felt the market couldn't support a similar series.

If true, that strikes me as being short-sighted on the publisher's part. After all, reportedly Gold Medal had been eager for a sequel to The Name of the Game is Death, so for them to later insist Marlowe turn the series into an espionage one seems counterintuitive. Furthermore, it's worth noting that from 1969 to 1976 Dan Marlowe would write Earl Drake adventures almost exclusively, forsaking completely the standalone crime works he'd previously penned as well. If the considerations for turning the Earl Drake series into a spy series rather than a crime one were entirely commercial, as Hoffman maintains, why didn't Marlowe write other books besides – books he was more interested in writing?

I wonder how much of this is a selective rewriting of history on the part of modern day aficionados of mid-twentieth century hard-boiled crime fiction. By and large the Drake spy thrillers are dismissed out of hand by fans who – understandably – prize the coruscating hard-boiled crime works of the 1950s and '60s above their corresponding spy confections. But to have lasted seven years and ten books as a spy series (the series as a whole having lasted fourteen years, although there was a considerable gap between The Name of the Game is Death and One Endless Hour), Marlowe's post-One Endless Hour novels must have had something going for them – indeed, the series may only have been curtailed because Marlowe suffered a suspected stroke in 1977. And even if sales alone aren't a marker of quality, then surely the fact that the only one of Marlowe's around fifty novels and novellas (after an eight-year gap he knocked out twenty younger reader novellas from 1983 to his death in 1986) to win an Edgar Allan Poe Award was one of his Earl Drake spy thrillers (Flashpoint, 1970, alias Operation Flashpoint, the fourth book in the series, which won the Best Paperback Original prize). 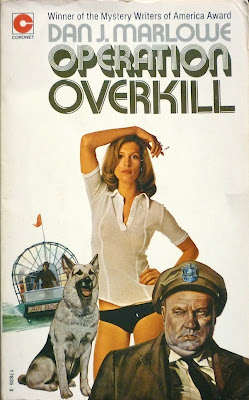 For me, this prejudice against the Drake spy novels is typified by the attitude towards the debut Drake outing, The Name of the Game is Death (1962). Widely – and justifiably – hailed as Dan J. Marlowe's towering achievement, the novel was later rewritten – presumably by Marlowe himself, although it's claimed at the insistence of Gold Medal – for a 1972 revised edition (published as Operation Overkill in the UK in 1973) – one revision being the insertion of the name "Earl Drake" as one of the narrator's many aliases. The critical consensus these days is that the original is the superior beast, legend having it that the novel was drastically toned down for its '72 reissue, so as to make Drake more palatable now that he was an "heroic" secret agent. In fact that doesn't appear to be the case at all. As this Mystery*File post demonstrates, most of the revisions are editorial in nature – often to the benefit of the text – the exceptions being two subtle alterations to do with Drake's sexuality. Drake is just as vicious and murderous in the revised edition, so to claim that he and the book were "toned down" is disingenuous.

The inference, of course, is that the original work is as Marlowe intended it – "authenticity" being the trait prized above all others nowadays – and that both the later version and by extension the Drake spy works were essentially written for a paycheck. But historically much great art has been created on commission, and Marlowe, like all professional writers, undoubtedly wrote for money as much as anything – and that's probably as true of The Name of the Game is Death as it is of the later Drake novels. Like his contemporaries in the hard-boiled field – Jim Thompson, Westlake, Peter Rabe – Marlowe wrote fast and frequently – the only way to make a living wage from paperback crime fiction. Based on the available evidence, I'm leery of ascribing motives to the choices Marlowe made: who's to say how hard he fought to stop The Name of the Game is Death being rewritten – if indeed he fought at all. Perhaps the revised version is as Marlowe intended, not the original. (If anyone can offer any informed insights here, I'd welcome your thoughts.)

Ultimately, what you make of the Drake spy books rests on which side of the genre fence you find yourself – hard-boiled crime fan or international espionage freak. (Even more ultimately, in the grand scheme of things, it's entirely likely that, other than me and possibly Bill Crider, nobody gives a damn whether the Drake spy novels are better or worse than the Drake crime novels anyway, so this whole post may well have been a complete waste of everyone's time.) Personally, I've plenty of time for both, and I'm not alone: as the indispensable Spy Guys & Gals site points out, there's much to enjoy with the Drake spy novels, Drake's unusual origin as a lawless killer lending them an added frisson. And for book collectors, there's plenty to investigate, too, as we'll discover in the final post in this run... 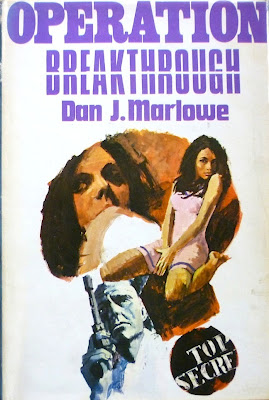