On to the second of my latest (brief) run of posts on Len Deighton's Secret File novels, which star the nameless spy more commonly known as Harry Palmer. And after reviewing the unnamed spy's first outing (not to mention Deighton's debut), The Ipcress File – with additional thoughts on the book from Kingsley Amis (and some great comments now, too) – today I'm taking a look at the author and his star's second espionage thriller: Horse Under Water. 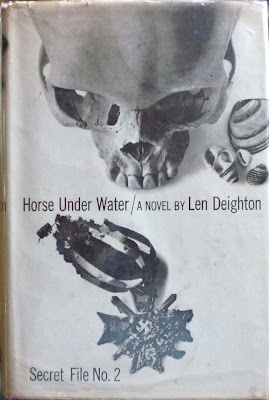 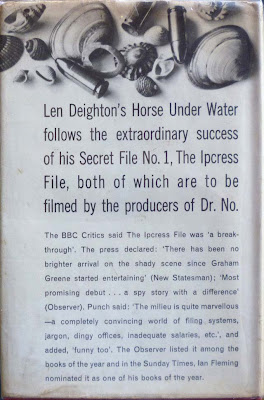 Published by Jonathan Cape in 1963, Horse Under Water sees Deighton's unnamed agent taking a navy diving course so as to assist in the investigation of a sunken German U-boat, in which is discovered heroin (hence the "horse" in the title). Rob Mallows's excellent Deighton Dossier website has further information on the novel – one of two "unnamed spy" books not to have been turned into a film (the fifth novel, An Expensive Place to Die, wasn't filmed either) – and tons of other Deighton-related material as well – as does the spin-off Deighton Dossier blog (from which Rob kindly linked my Ipcress File post). The dustjacket was designed once again by Raymond Hawkey, and for me it's a toss-up as to which is better – the jackets for The Ipcress File, Horse Under Water or, indeed, for Secret File No. 3, Funeral in Berlin (1964), which to my mind is just as good as the first two.

As explored in the comments in the previous post, Deighton left his original publisher, Hodder & Stoughton, after he became dissatisfied with their conservative print run on The Ipcress File, moving instead to Jonathan Cape (to whom he'd originally shown The Ipcress File), where he would remain until the late-1970s. However, so successful was Deighton becoming that even Cape had to act fast to keep up with demand for Horse Under Water, despite its larger print run. A second printing was required a couple of months after the first... and here we encounter a certain amount of confusion in book collecting circles...

As with The Ipcress File, where many chapters are prefaced by astrological predictions for Aquarius, there's a playful theme weaving through Horse Under Water, too: crosswords. Each numbered chapter has a prefatory "clue", with a corresponding list of numbers and "solutions" at the start of the book: 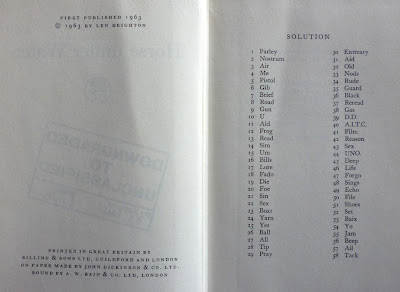 Furthermore, the endpapers of the novel are designed as a crossword puzzle, with the grid on the left hand paper and the clues largely on the right (repeated on both front and back ends): 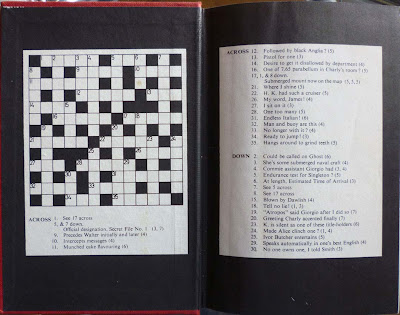 And here we reach the source of the confusion: the crossword endpapers seemingly only appeared in the first impression of the first edition; for later impressions the ends were simply printed plain black. But many sellers on sites like AbeBooks – and indeed in bricks-and-mortar bookshops – neglect to mention this, and so there are a lot of copies of Horse Under Water out there being sold as true first editions when they are, in fact, no such thing. Some sellers even go so far as to suggest that the plain black endpaper edition is the true first, not the crossword endpaper edition; and since black endpapered copies don't appear to bear the legend "second impression" on the copyright page, it could be argued those sellers have a point. 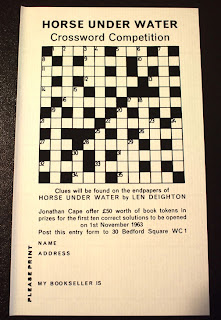 Of course, the upshot of readers sending their inserted crosswords off is that very few copies now have the insert still inside, and those that do fetch a premium as a result (you'd be lucky to find one for much less than £200). Mine, you'll be unsurprised to learn, does not have the insert included, but it does at least, as you can see, have the crossword endpapers. I bought it fairly recently (for a very reasonable price) in Lewes' Bow Windows Bookshop; their stock of first editions doesn't change that much, but I just happened to pop in there and there it was, propped up on the table. Its dustjacket is a little grubby, but at least the endpaper crossword isn't filled in – something that had happened to another copy I saw at a book fair a while back. (At a more recent book fair I saw another copy of Horse Under Water, advertised as a true first, and including the insert, but actually with plain black endpapers. See what I mean about confusion?)

UPDATE 1: A further wrinkle has emerged as regards the first edition. Len Deighton's biographer, Edward Milward-Oliver, emailed me shortly after I posted the above, letting me know that 500 copies of Horse Under Water were sent out prior to publication to reviewers and trade buyers... with plain black endpapers. This was done, Edward reports, "so as not to pre-empt the crossword competition which ran from publication day Monday October 21 to Thursday October 31, 1963". Therefore, it seems that at least some of the black-endpapered copies actually preceded the first impression...

Anyway, so this post isn't entirely devoted to tedious matters to do with book collecting, let's turn in closing to our old friend Donald McCormick, and his 1977 survey, Who's Who in Spy Fiction. To assist in the writing of his book, McCormick communicated via letters with many of his subjects, Len Deighton among them. Consequently, there are some intriguing insights in Deighton's entry, and direct quotes from Deighton himself, such as: "Writers like me have quite a lot in common with spies. I like to be able to listen to conversations without people turning round to look at me." Horse Under Water gets a good few lines to itself, which are worth quoting, I think:

Here was an author who was fascinated by war and the gadgetry and hardware that go with modern warfare. He sought authentic background for his second story: "My hero has to dive to a sunken submarine. So that I could get background stuff the Admiralty gave me access to HMS Vernon, the frogman training establishment." Somebody must have thought he was too interested in these matters, because the Naval Security authorities asked to see the manuscript of Horse Under Water.

UPDATE 2: In his email to me, Edward Milward-Oliver also mentioned that the jacket of the first edition of Horse Under Water differs from the proof jacket, which was more cluttered and featured a photograph of Len Deighton at HMS Vernon on the front flap. Edward attached a scan of the proof jacket to his email, so with many thanks to Mr. Milward-Oliver, here it is, with photos of my first for comparison: 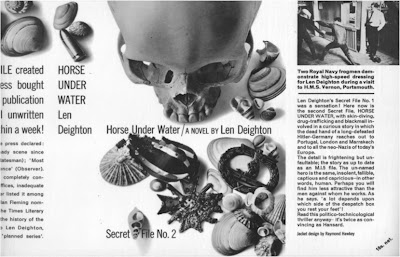 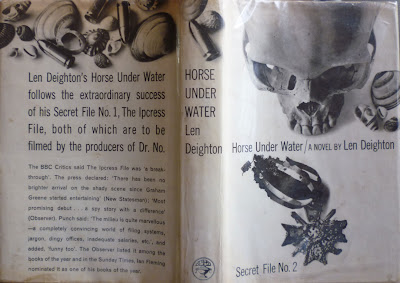 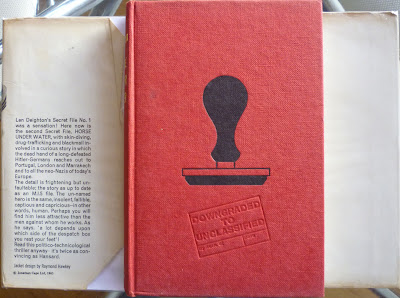 And that's all from Deighton's unnamed spy novels for the moment... but not all from Deighton. Because I have a Len Deighton bonus post lined up next, on a collection of travel writing boasting contributions from some of the 1960s' leading journalistic lights...
Posted by Nick Jones (Louis XIV, the Sun King) at 07:35