For this second of two posts on intriguingly collectible editions of Quiller spy novels by Adam Hall – a.k.a. Elleston Trevor – I have a first edition which has a direct connection to another Quiller first I blogged about in September... 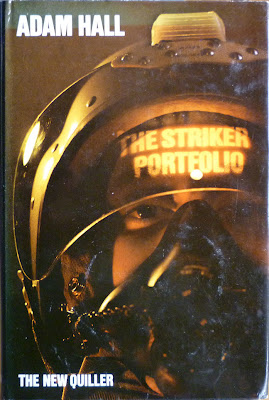 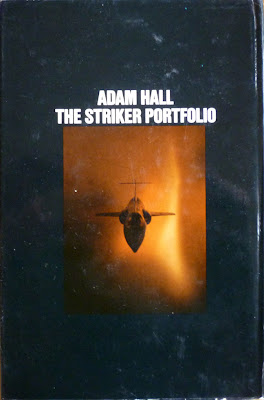 This is the British hardback first edition of The Striker Portfolio, the third Quiller mission, published by Heinemann in 1969 (dustjacket design/cover photos uncredited, I'm afraid; again, perhaps the Quiller Yahoo Group can shed some light there). I blogged about this particular novel – which sees Quiller trying to find out why thirty-six Striker aircraft have crashed within a year – during my initial run of Adam Hall/Quiller posts back in July, in a 1970 Book Club edition. Which begs the obvious question, why on earth am I now blogging about the book again – albeit in a different edition – especially when I stated in that original post that the Heinemann first wasn't terribly scarce and that therefore I was perfectly happy with that Book Club copy? And it's true, the Heinemann first is readily available... but this particular copy is a bit more special than merely being a first edition. For if we take a look on the front endpaper... 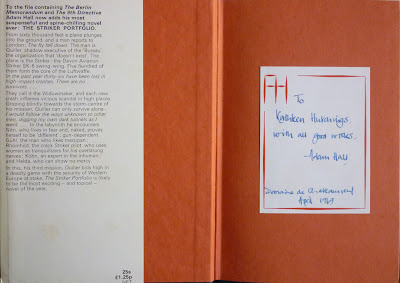 We can see that it has an Adam Hall bookplate affixed, signed by Elleston Trevor as Hall. It's dated April 1969, and addressed from Domaine de Chateauneuf, near Nice, where Trevor was living at that juncture. But what's more, it's inscribed to a Kathleen Hutchings... who, in a strange quirk of fate, is precisely the same person the signed Adam Hall bookplate first edition of the second Quiller novel, The 9th Directive, I blogged about in September was dedicated to. What are the odds? The two books came from completely different dealers (although both from Amazon Marketplace), are in markedly different condition – fine in the case of The Striker Portfolio, only about good in the case of The 9th Directive – and are dated by Hall two years apart, and yet have both ended up in my greasy paws. 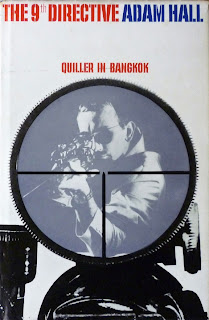 Mind you, considering the scarcity of signed copies of Adam Hall novels – as I mentioned in that 9th Directive Post, while there are a good forty-plus copies of various signed Elleston Trevor books on AbeBooks, signed Adam Hall/Quiller novels number in the low single figures – I guess it's not so surprising that I've ended up with two books dedicated to the same person. Whoever Kathleen Hutchings was, then, she belonged to a very select and lucky band, and, considering the two books I own are dated a couple of years apart, evidently she had a years-long association with Trevor. And as spy novelist and Hall/Quiller aficionado Jeremy Duns wondered when I tweeted about this copy of The Striker Portfolio – to my knowledge the only signed edition of the book in existence – does that mean there are other dedicated-to-Kathleen-Hutchings Quiller first editions out there somewhere...? 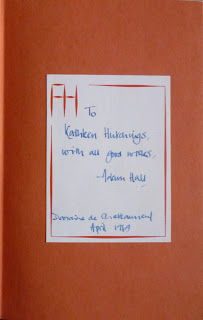 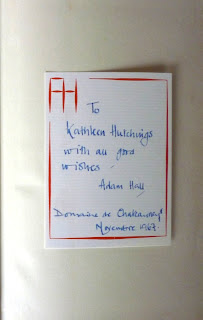 Anyway, that's all from Adam Hall for the moment (although as ever, I'll be returning to him down the line)... but that's not all from the spy fiction series. Because while I had planned to veer away from the espionage novels briefly for a Violent World of Parker cross-post, I've just received confirmation of a very exciting piece of news regarding another spy novelist – an author I blogged about just last month in a run of posts on his best known creation, Matt Helm. So check back in with Existential Ennui later today for an exclusive announcement about Donald Hamilton...
Posted by Nick Jones (Louis XIV, the Sun King) at 04:26