Having blogged about Len Deighton's first two Secret File novels, The Ipcress File (1962) and Horse Under Water (1963) – and thanks are due for their assistance with those posts to Rob Mallows, Edward Milward-Oliver and everyone who left a comment – for this Deighton bonus post I have a splendid book of non-fiction, one which I was alerted to by the ubiquitous Jeremy Duns... 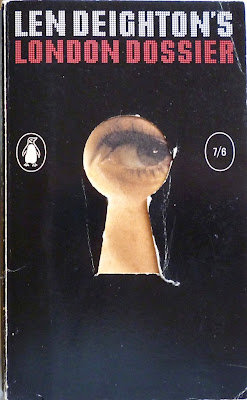 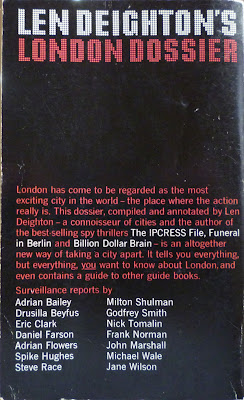 Len Deighton's London Dossier was first published in the UK in 1967 simultaneously by Jonathan Cape – in hardcover – and Penguin – in paperback, which is the edition you can see above. I say "first published", but in fact that should really be "first and only", because those two editions represent the only appearance of the book, which has been out of print for decades. Consequently, London Dossier is in very short supply in either edition: there are no copies at all on Amazon Marketplace at present, and only ten on AbeBooks, only one of those – a Cape hardback – from a UK-based seller. So any Brits wishing to get themselves a copy have a slight problem... although, if you're quick, you could always swoop in on this eBay auction for a Penguin paperback, which ends just before 6.30pm on Tuesday 20 December. 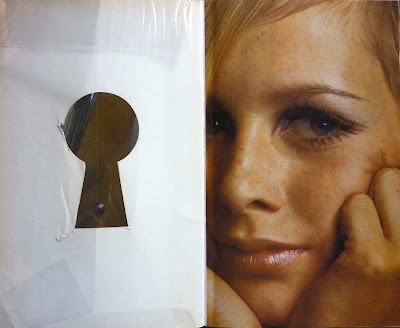 And it is worth getting hold of, not least for the terrific cover, which was designed by Len Deighton's friend, Raymond Hawkey. Hawkey designed the covers of both editions of the book, and while his concoction for the Cape hardback dustjacket, which replicates the notices you'd often find in a public telephone box, is inventive – you can see it on the book's dedicated page on Rob Mallows's Deighton Dossier website – the Penguin cover is, to my mind, equally alluring. It's actually a double-cover, comprising an outer front cover with a die-cut keyhole, and an inner cover bearing a photo of famed model Twiggy's face, whose left eye peeps through the keyhole. It's an innovative piece of design, and foreshadows Hawkey's slightly later "bullet hole" covers for Coronet's line of Richard Stark "Parker" novels. 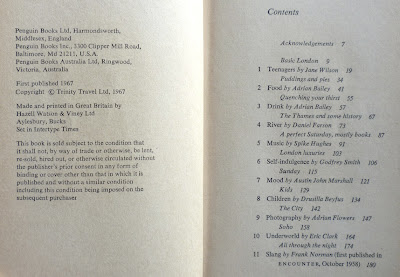 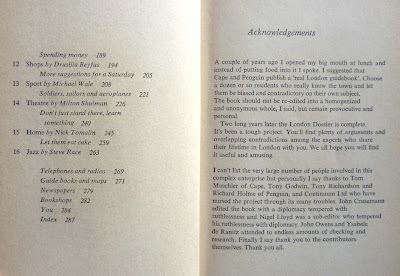 As to the book itself, it's a collection of essays by Deighton and others on London – a kind of tourist guide, if you will. Deighton provides an opening general guide to London – with lots of helpful advice, such as this for umarried couples: "British hotels... (being primarily concerned with the proprieties), prefer you to [book in as] Mr and Mrs even if you are sinning" – and another dozen or so short pieces, sprinkled in amongst essays by the likes of journalist and noted Soho boozer Daniel Farson, photographer Adrian Flowers (who took the cover picture of Twiggy) and thriller author Eric Clark. For my part I was pleased to spot mentions of my old Soho haunt The Coach & Horses, as well as The Colony Room – Michael Andrews's evocative 1962 painting of which (part, I recently discovered, of the permanent collection at the Pallant House Gallery in Chichester) can be seen below – both of which were frequented by one of my favourite writers, Jeffrey Bernard (I sat next to him at the bar of the Coach a few times, and saw Peter O'Toole play him in Jeffrey Bernard is Unwell) – that's him in the white shirt on the left of Andrews's painting. 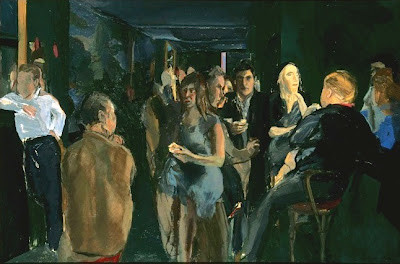 The essays are fascinating, idiosyncratic and often hugely entertaining, and last year the book as a whole acted as a springboard for a series of columns in The Londonist, taking each chapter in turn and looking at how London has changed since. It's tough to beat the original, though, which has obviously dated in some respects, but still contains plenty of information on the capital which will prove useful to the befuddled tourist. That's if they can find a copy...

And with that, I'm done with Mr. Deighton for now, and almost done with the regular posts for this year as well. But there should just be time to squeeze in a Violent World of Parker cross-post before I get to my long-dreaded – I mean, awaited – end-of-year-review posts, so look out for that soon...
Posted by Nick Jones (Louis XIV, the Sun King) at 09:09