So then, did we all enjoy Paul Simpson's guest post on Big Finish's Sherlock Holmes audio plays? Jolly good. All being well, Paul will be back in the new year with another guest post, and I'll also hopefully have a further guest essay from another friend and former colleague of mine, on a "suppressed" work for adults by one of Britain's most beloved children's authors.

Back in the here and now, though, I'd just like to say a quick thank you to Ethan Iverson, whose brilliant Do the Math blog linked Existential Ennui at the end of last week, in the process sending a stampede of no-doubt bewildered traffic my way. I was already familiar with Do the Math, having used Ethan's terrific overview of Donald E. "Richard Stark" Westlake's canon – which includes quotes from Westlake himself – to navigate Westlake's work when I first got into that writer's novels a couple of years back, so it's a real pleasure to receive props from Mr. Iverson, and for my part I can heartily recommend spending a few hours exploring his extensive archives.

Anyway: to business. And I'm afraid the year is rather getting away from me: I'm not going to be able to complete my series of posts on spy fiction series before 2011 draws to a close, so that series will have to continue in the new year. But I should be able to squeeze in a couple more spy novelists – and a couple of Violent World of Parker cross-posts – before I inflict a barrage of end-of-year missives on you, both of them writers who've featured on Existential Ennui before. Beginning with the first of two novels by Adam Hall, an alias of Elleston Trevor: 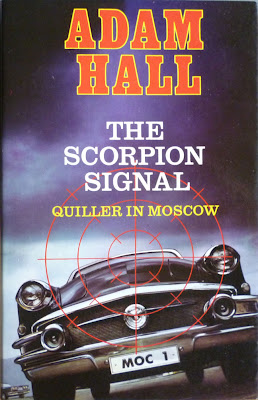 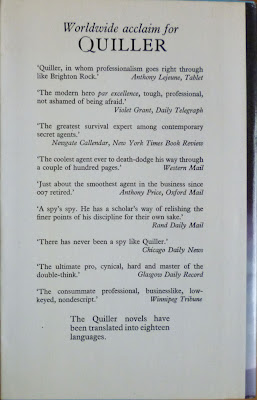 This is The Scorpion Signal, Hall/Trevor's ninth novel to feature his secret agent protagonist Quiller. I blogged about the Quiller series in a run of posts in July; in this instalment, Quiller must retrieve an old ally from the clutches of the KGB. But what's interesting about this particular copy of the novel is that it's not, for a change, the British first edition – or at least not what we'd normally identify as a first edition. For one thing, although it has a dustjacket (unclipped, but also uncredited – I can't tell you who illustrated it; possibly Chris Foss, who illustrated the jacket of 1973's The Tango Briefing... perhaps the denizens of the Quiller Yahoo Group can lend some assistance here...?), once you remove the jacket, instead of being cased the book inside has been bound in a thin blue paper cover, with nothing at all printed on it: 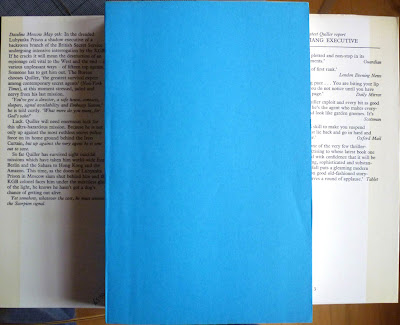 However, the copyright line inside the book states that it is the 1979 Collins first edition: 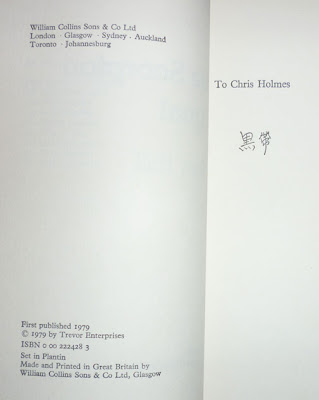 So what is it? The eBay seller I bought it from called it a "prebind", a term which usually denotes a library edition of a novel. I'm not sure that's an accurate description, though. I think it's more likely it's an uncorrected proof, i.e. an advance readers' or reviewers' copy – see this post on a Patricia Highsmith proof and this one on a Dennis Lehane one – in which case it predates the British first edition. But while there are plenty of copies of the proper British first on AbeBooks at present, ranging in price from a fiver to over twenty quid, I can't see any other copies of this proof (or prebind, or whatever the hell it is), making it something of a collectible curio. 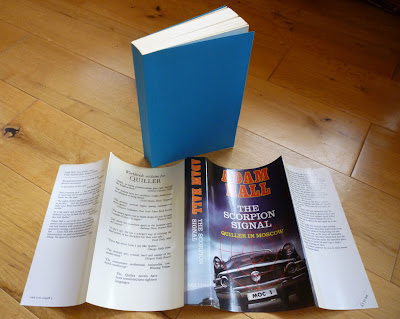 But not, perhaps, as collectible as the second Adam Hall novel I'll be showcasing – a very special first edition which has a connection to another Hall/Quiller first I blogged about in September...
Posted by Nick Jones (Louis XIV, the Sun King) at 03:43