For this final post on the Matt Helm spy novels by Donald Hamilton – final for now, anyway; I should have a further Matt Helm post quite soon, and a very exciting one at that – I have an unusual edition of one of Hamilton's Helm novels, the atypical format of which makes it unique among the twenty-seven books in the series...

As I mentioned in the previous post, thus far all of the Matt Helm books I've been showcasing have been paperbacks – reason being, in the US and the UK pretty much every book in the series was published both first and exclusively in paperback. The paperback format was Hamilton's natural home, as it was for other softcover kings like Peter Rabe and Jim Thompson – which isn't to say that, also like Rabe and Thompson, Hamilton didn't make it into hardback on occasion. A number of Hamilton's pre-Matt Helm novels were initially published in hardback, among them Date with Darkness (Rinehart, US, 1947), The Steel Mirror (Rinehart, US, 1948), Rough Company (Wingate, UK, 1954) and The Big Country (Wingate, UK, 1958).

Out of all the Matt Helm novels, though, only one was ever published under hard covers: 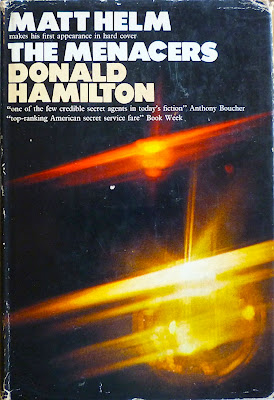 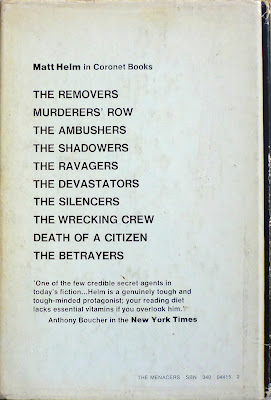 This is the UK hardback first edition of The Menacers, published by Hodder & Stoughton in 1968 – also published in paperback in the States that same year by Gold Medal – under a dustjacket designed by Michael Dempsey, others of whose jackets adorn my firsts of Patricia Highsmith's The Tremor of Forgery (one of may favourite novels of all time) and Richard Stark's Alan Grofield novel The Damsel. The eleventh Matt Helm novel, it sees Helm sent to Mexico (again) to investigate, of all things, a UFO sighting (see the Unofficial Matt Helm site for more). 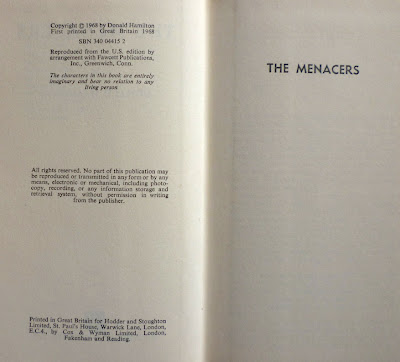 I found this copy very recently, at the Paperback & Pulp Bookfair in London – which, I guess, is something of an oxymoron, since this edition of The Menacers clearly isn't a paperback (or a pulp). But there were a few hardbacks on sale at the fair (perhaps they were there just for me...), all of them pretty rare, and I came away with some real crackers, including this. There's only one other copy of this edition on AbeBooks from a UK-based seller at present, a tatty-sounding ex-library affair, and the remainder of the ten copies listed are dotted around the globe. My one set me back the princely sum of £4.50, which, considering I'd have to pay at least thirty quid including shipping for a comparable copy – and even though the jacket's a little edge-worn – was a bit of a bargain.

The front cover trumpets the fact that it's Matt Helm's first appearance in hardback (see – it's not just me who cares about these things)... but it was also to be his last. Presumably The Menacers didn't sell well enough for Hodder to persist with the series, although UK paperback publisher Coronet would continue to issue the Helms for years yet. Consequently, it's an intriguing curio for collectors. 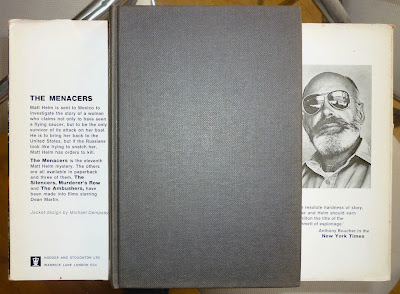 I was going to sign off yesterday's Matt Helm post with a great quote I found from Donald Hamilton in my copy of Donald McCormick and Katy Fletcher's Spy Fiction: A Connoisseur's Guide (1990), but unfortunately Blogger deleted the last part of that post, and I had to reconstitute it sans quote. So let's round off all three of my Matt Helm posts with it instead. Here's Hamilton's own admirable analysis of the philosophical principle behind his novels:

"Entertainment is what it's all about. Messages go by Western Union." 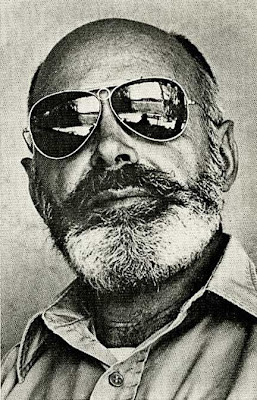 Looking ahead, and I haven't quite decided which spy fiction series I'll be featuring next in this series of posts on spy series, nor indeed what I'll be blogging about next over on The Violent World of Parker. I've all manner of options open to me, so when I eventually make my decision, it'll be a nice surprise for us all...
Posted by Nick Jones (Louis XIV, the Sun King) at 09:38