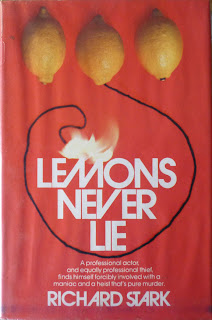 After a slightly-longer-than-anticipated gap following my re-posting on The Violent World of Parker the other week of my three previous reviews of Donald "Richard Stark" Westlake's Parker spin-off Alan Grofield novels – The Damsel (1967), The Dame (1969) and The Blackbird (also 1969) – here, finally, are my thoughts on the fourth (and final) Grofield solo outing, Lemons Never Lie (an alternative view of which you can, of course, read on TVWoP supremo Trent's Lemons Never Lie dedicated page). And of all the Grofield books, this one is the closest in tone, structure and plot to the Parker novels – although whether that's a good or bad thing is, I think, open to debate.

Divided into five titled parts – "Las Vegas", "Mead Grove, Indiana", "St. Louis", "Moving" and "Monequois, New York" – as opposed to (most of) the Parker novels' untitled four-part structure, Lemons Never Lie opens with Grofield – actor, summer stock theatre owner and occasional thief – in Las Vegas to participate in a heist planned by an amateur named Andrew Myers. Unfortunately, the job looks to be potentially a disastrous massacre, so Grofield and another heister, Dan Leach, bow out. Leach, a seasoned gambler, nets a cool twelve grand on a craps table, but when Grofield returns to his motel room before leaving Las Vegas, he's ambushed by two shotgun-wielding masked men looking for Leach's winnings. Knocked unconscious, Grofield wakes to find Leach looming over him. Turns out the masked men subsequently tracked down Leach and took his cash, and it doesn't take much for Grofield and Leach to work out that their assailants were Myers and an associate of his. 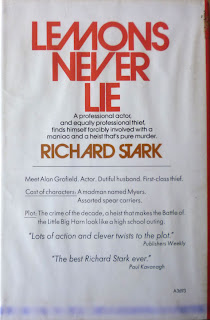 From here on out, Grofield's, Leach's and Myers's lives become increasingly entangled, their fates inextricably intertwined; Grofield's involvement with Leach and especially Myers leads to him losing his takings from a later score, impacts on his home life in a horrific manner, and eventually sets him off on a manhunt, as the double-crosses come thick and fast and the bodies start to pile up.

Now, if all that sounds a bit like a late-1960s/early-1970s Parker thriller – The Sour Lemon Score maybe, or Plunder Squad – that's because, essentially, it is. Previously, Westlake/Stark seemed intent on trying Grofield out in other, non-crime roles in his solo outings – a reluctant adventurer in The Damsel; a locked-room murder mystery detective in The Dame; a recalcitrant secret agent in The Blackbird. That those personae largely proved an ill fit for Grofield is why each of those novels ultimately fell down, but they were at least intriguing attempts at shoehorning him into different genres. With Lemons Never Lie, both Westlake and Grofield are back on much more familiar territory. And that, for me, is why it's a less interesting effort than its predecessors. 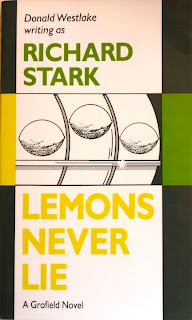 Don't get me wrong: taken simply as crime novel, it's a damn fine piece of writing. It's violent, surprising, suitably twisty-turny, and populated by a cast of reprobates cut straight from the Parker template. But that's the problem: it is, at root, a Parker thriller in all but name, with Grofield standing in for his emotionless, taciturn associate. Noble failures the three previous Grofield solo outings may have been, but they did at least attempt to do something different with the character, rather than just plonking him in a Parker story – as is the case here.

Of course, Grofield is no Parker: while he does set out on a path of vengeance in the latter stages of the novel, murder on his mind, it doesn't come as a huge surprise that, come the final bloodbath, he's somewhat sidelined. Whereas one would expect to find Parker at the close of a novel such as this with his big, veiny hands around his nemesis's throat, it's tough to buy Grofield as a cold-blooded killing machine, even given the iniquities inflicted on his wife back in Indiana. Grofield doesn't "own" the story in the way that Parker does his. One feels Parker's presence on every page of a Parker novel, driving the story even when he's offstage. Grofield, by his affable nature, lacks that capacity, at least as regards this type of tale. 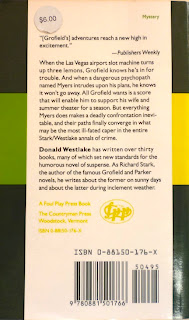 And that, ultimately, is what Lemons Never Lie shows clearest: that Grofield is a supporting player. He works best either as a semi-comedic foil for Parker's humourless countenance or as a solid back-up man, competent and reliable during a heist. It's perhaps telling that Lemons Never Lie would prove to be Grofield's final solo outing; possibly Westlake realised that, after trying Grofield out in a variety of roles before depositing him in a Parker-style thriller, Grofield really couldn't cut it as a leading man. And it's also worth noting that Grofield had become slightly superfluous by this point anyway; Westlake was already underway on another crime series, one featuring a lead not a million miles away from Grofield: John Dortmunder.

All that said, taken on its own merits, Lemons Never Lie is, I think, the best of the four Alan Grofield novels, although I do still harbour a fondness for the third one, The Blackbird. However, although Lemons Never Lie was Grofield's last solo stand, it wasn't his final appearance full stop. He had one more fairly major role to play, in the novel that would cap the initial run of Parkers: 1974's Butcher's Moon. And I'll be blogging about that book before too long...

Before that, though, it's back to the spy fiction series here on Existential Ennui, with a review of the first instalment in a long-running American series starring a man named Matt Helm...
Posted by Nick Jones (Louis XIV, the Sun King) at 06:59