After a slightly-longer-than-anticipated John le Carré-shaped diversion, it's back to the short stories written by Donald E. Westlake for various science fiction magazines in the early 1960s. And whereas the previous Westlake SF short (if you can cast your mind back that far) involved teleportation, this next story centres on... telepathy... 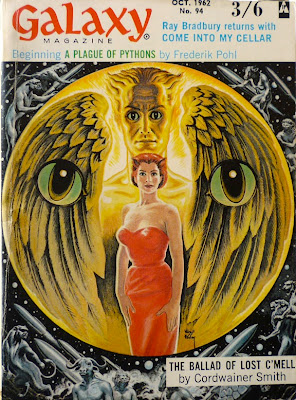 "The Earthman's Burden" was first published in the October 1962 issue of Galaxy Magazine (cover art by the great Virgil Finlay), and unlike the last two stories I blogged about, this one has been reprinted since – in the 1989 collection Tomorrow's Crimes. I've no idea what the editorial criteria was for which stories were included in that volume; while "The Earthman's Burden" is a decent enough effort, it's not, to my mind, any better than "Look Before You Leap". It also faces stiff competition in this particular issue of Galaxy: it's preceded by strong stories by Cordwainer Smith (the classic, exemplary "The Ballad of Lost C'mell") and – a personal favourite author of mine – Ray Bradbury, whose "Come into My Cellar" is typical of his punch-to-the-gut shockers.

Inevitably, then, when stacked up against two giants in the science fiction field, Westlake's story rather suffers by comparison. Although in one respect it's quite prescient: what the tale most reminded me of was the Star Trek episode "This Side of Paradise", which originally aired in 1967, five years after "The Earthman's Burden". Indeed, Westlake's SF stories do seem to have more in common with the more prosaic likes of Star Trek and Lost in Space, or, more appositely I guess, The Twilight Zone, than with the more lofty themes and preoccupations of the likes of Smith and Bradbury. It's even possible to imagine a parallel universe where, after years of toiling in the sleaze paperback market and contributing scattershot short stories to magazines, Westlake went on to embark upon a career in television, rather than becoming a crime fiction author. 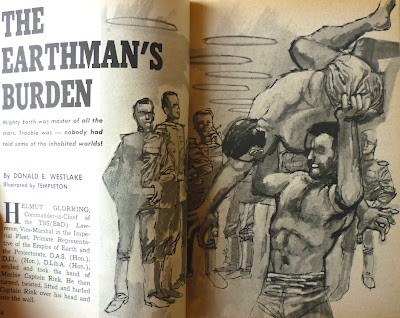 Certainly "The Earthman's Burden" would make for a compelling hour's worth of TV. The plot deals with an expeditionary force of warlike humans from the Empire of Earth and the Protectorate, whose mission it is to seek out, er, old life and civilizations – namely those colonized planets which have been "lost" since the collapse of the Old Empire. Chancing upon a primitive colony on a small planet, Commander-in-Chief Helmut Glorring (shades of National Socialism there) sends Captain Strull, scientist Cahann and a lobotomized marine named Elan down to the surface, where they're met by a cheery man called Harry. Turns out the natives are blissfully unaware of the Empire of Earth, due to the fact that their colony was established before the advent of the Empire. And though on first appearance the natives seem benign, it soon becomes clear they possess extraordinary powers...

Much of the fun of "The Earthman's Burden" comes from the background Westlake establishes for Glorring and his subordinates on the spaceship Lawrence. The Empire of Earth is military-dominated, a hierarchical society where battlefield prowess is prized; consequently the denizens of the Lawrence are prone to impromptu bouts of wrestling. Meanwhile the colonists go from forgotten harmless innocents to slightly more sinister agent provocateurs, concocting a strategy which could well result in the destruction of the Empire. It's not entirely clear where Westlake's sympathies lie, either: on the face of it, it's with the colonists that we're meant to empathize, but the means by which they intend to enact their plan smacks of coercion. While the aim may be noble, the method is rather less so. 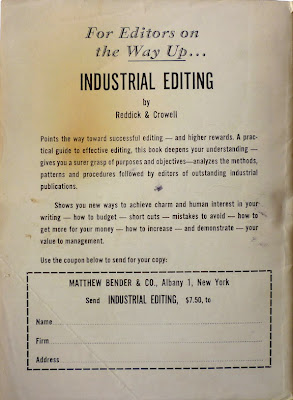 "The Earthman's Burden" clocks in at close to thirty pages, and one can't but feel that a lower page count and resulting editorial trimming might have benefited the tale; Ray Bradbury's immediately preceding "Come into My Cellar" manages to be more effective in half the space. Then again, Bradbury was the master of the short story, so it's probably a little unfair to make that comparison. But the next – and final (for now) – Westlake SF short I'll be reviewing certainly doesn't outstay its welcome: it really is very short indeed. And, unusually, Westlake enlisted a co-writer for this metaphysical tale...

Ahead of that, though, I'll have a post on a newly published book on graffiti and some revelations about its mysterious author...
Posted by Nick Jones (Louis XIV, the Sun King) at 04:17