The Terminal Man by Michael Crichton: A Review of the British First Edition (Jonathan Cape, 1972)

Here's a book wot I bought during my recent – and yet feeling increasingly like it was bloody ages ago – week's sojourn to Devon: 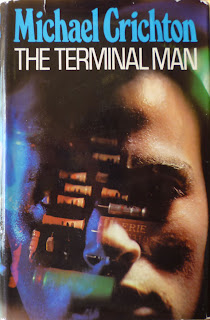 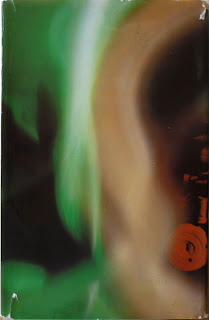 This is the UK hardback first edition of Michael Crichton's The Terminal Man, published by Jonathan Cape in 1972, with a dustjacket photo by David Davis. I saw this copy sitting outside a funny little secondhand bookshop – actually more of a house converted into a bookshop, really – called Book Relief, situated in the back streets of the coastal Devonshire village of Appledore: 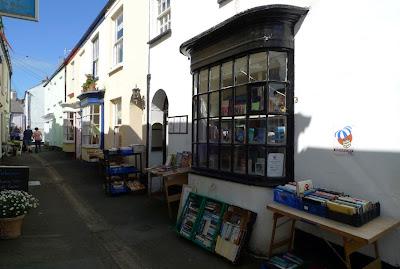 I think I paid a quid for the book, which was a minor bargain, as UK first editions usually go for anything from £15–£80. The Terminal Man was Crichton's second novel under his own name, following 1969's The Andromeda Strain (Crichton had a number of other novels published from 1966–1972, mostly under the alias John Lange), and it originally appeared – in a truncated form – in Playboy magazine. I've seen umpteen movie adaptations of Crichton's work – the aforementioned The Andromeda Strain, Sphere, Jurassic Park, etc. – but this was my first exposure to his prose, and it was an enjoyable but mixed experience.

Certainly The Terminal Man is eminently readable – I tore through it in a couple of days during my holiday – but it's also curiously colourless. The central idea is compelling: Harold Benson, a computer engineer suffering from blackouts and concurrent violent episodes following an accident, elects to undergo experimental surgery to have an electronic mood stabilizer hooked up to his brain – a kind of pacemaker for the mind. When the computer the device is linked to senses the onset of an episode, electrodes implanted in his brain transmit small abortive shocks, thus stopping the seizures before they can begin. But as soon becomes clear, Benson suffers from more than mere blackouts: he's also delusional, with an irrational fear of – and bizarre philosophy about – machines. And once the procedure is complete, Benson begins to crave the electric shocks, and engineer the onset of seizures in order to receive them... 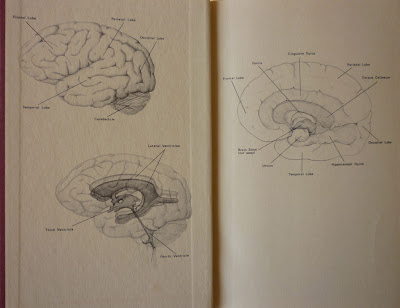 It's a fascinating notion, and evidently based in fact: there's a four-page bibliography at the back of the book, and mocked-up – but seemingly authentic – illustrations, photos and graphs on the endpapers and scattered throughout the pages. But although Crichton makes the technical jargon surprisingly gripping, and although his plotting is propulsive, the novel also feels rather shallow. I think the problem is the depth of the characterization – or rather, the lack thereof. Crichton doesn't seem terribly interested in his characters. Surgeons Morris and Ellis and psychiatrist Janet Ross are granted a few perfunctory background details and character ticks – an unsuccessful date, a bit of angry swearing –  but they never really come alive. Even Benson is largely defined by his machine psychosis and his seizures. 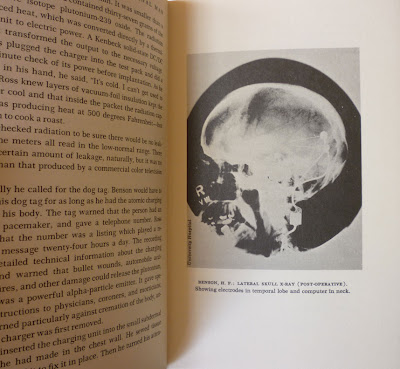 The Terminal Man isn't a bad book by any stretch of the imagination. It's stuffed with ideas, and those ideas are wrapped up in a compelling narrative. For me, though, a little more insight into the characters wouldn't have gone amiss, and although I enjoyed the book, I wasn't particularly moved to go and seek out further Crichton novels.

Right then. Next up: a spy thriller author who I suspect most readers of Existential Ennui will never even have heard of...
Posted by Nick Jones (Louis XIV, the Sun King) at 09:06