The Deadpan Comics of Norwegian Cartoonist Jason, Featuring a Review of Isle of 100,000 Graves (Fantagraphics, 2011) 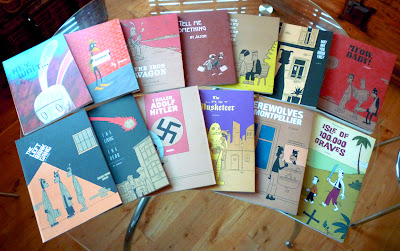 I've been reading the graphic novels written and drawn by Jason – alias John Arne Sæterøy – since American independent comics publisher Fantagraphics issued the first English-language edition of his work, Hey, Wait..., in 2001. By that point Jason had been publishing comics in his home country of Norway for twenty years, but for most of us in the US and the UK, Hey, Wait... was our first exposure to his unique talents. On initial inspection he seemed like one more "funny aminal" (sic), or anthropomorphic, cartoonist, in the tradition of Carl Barks or, from the 1980s black-and-white comics glut, Teenage Mutant Ninja Turtles. But one read-through of Hey, Wait... was all it took to reveal that Jason was closer in tone to Art Spiegelman's deconstruction of the subgenre in Maus. 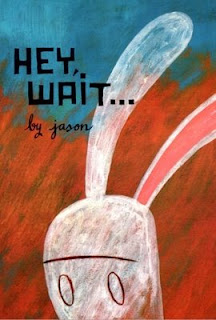 Divided into two parts, the first half of Hey, Wait... follows the adventures of two boys, Jon and Bjorn – drawn, in Jason's soon-to-become-trademark manner, as a humanized dog and rabbit – as they pal around their local neighbourhood, making mischief and generally just hanging out. But then an unexpected and shocking accident signals a marked shift in tone, and the narrative jumps forward some years to detail the humdrum existence of Jon, now grown-up and stuck in a mundane manufacturing job, and haunted by the tragedy at the heart of the tale. It's an achingly sad, deeply affecting piece of comics storytelling, and acted as a signal flare for the arrival of a major new (to English-language readers, anyway) talent in the comics field.

Since then, Fantagraphics have issued more than a dozen further graphic novels by Jason at the rate of over one a year, ranging from slapstick knockabout farces to an adaptation of an obscure Nordic mystery novel to a riff on Frankenstein's Monster. Especially good have been some of the full-colour novellas – coloured by Hubert – beginning with 2005's Why Are You Doing This?, a madcap mystery which wrings a not inconsiderable amount of pathos out of a Hitchcockian "wrong man" scenario. Also worth a look are 2006's The Left Bank Gang, a thriller depicting the travails of struggling cartoonists (!) Ernest Hemingway, F. Scott Fitzgerald, Ezra Pound and James Joyce in 1920s Paris, and 2007's I Killed Adolf Hitler, a tragicomic time-travelling domestic saga.

His latest graphic novel, Isle of 100,000 Graves, published again by Fantagraphics just last month, is co-written with French comics creator Fabien Vehlmann, who brings a sardonic sense of humour to Jason's deadpan stylings. Set in an unspecified period (but probably either the seventeenth or eighteenth centuries), the story follows Gwenny, a young girl waiting in vain for news of her father, who five years ago vanished in search of a treasure island drawn on a map in a bottle he'd found on the beach. When Gwenny too finds a similar treasure map, again in a bottle, she escapes the clutches of her embittered mother and sets about recruiting the assistance of some local pirates in order to find her missing father.

The map is of the famed Isle of 100,000 Graves, which, it turns out, is the base for a bizarre academy for trainee executioners – a leap of logic worthy of Pirates of the Caribbean. The scenes of the young apprentices learning the ways of torture, hanging, beheading and strangulation – latterly practicing on the hapless pirates – are just some of the highlights in a story that throws curveball after curveball at the unsuspecting reader.

Particularly enjoyable is the eyepatch-wearing pirate who Gwenny cons into helping her out by claiming "I know your secret", and who thereafter proves utterly ineffectual – especially when compared to the resourceful and cunning Gwenny – at one point wasting three whole days when he becomes completely incapable of action due to fretting about her fate. The story's denouement neatly punctures the whole enterprise, making a mockery of all that's gone before – which, considering all that's gone before has been gently mocking anyway, is no mean feat. Isle of 100,000 Graves ranks as one of the lightest of Jason's works, but although it lacks the gravitas of Hey, Wait..., it makes up for it with its sure comedic touch. I'll certainly be adding to my Jason collection when his next effort, Athos in America, arrives at the end of the year.

Next up: a review of a first edition of an early Michael Crichton novel...