As regular readers might have gathered, over the past year or so I've become increasingly interested in twentieth century spy fiction. I was reading spy novels before that, of course, notably those written by Ian Fleming and Gavin Lyall, but my consumption of espionage fiction has markedly increased in the last twelve months to encompass Graham Greene, John le Carré, Ross Thomas, Anthony Price, Adam Hall and Francis Clifford, with the likes of Joseph Hone, Sarah Gainham, Donald Hamilton and William Haggard waiting patiently in the wings. (Many of those names were brought to my attention by the ever-helpful commenters on Existential Ennui – you know who you are – to whom I can only express both my gratitude and my escalating alarm at the impact on my wallet their recommendations are having.)

Doubtless there are still further names from the last century I've yet to discover – writers so obscure or overlooked that they've almost been written out of history. Like, for example, this British author:

Thomas Cauldron wrote literally countless espionage and crime thrillers over an indeterminate period from, I believe, the late 1920s to the early 1980s. Most were published straight to paperback, and few are remembered today, but spy-fic fans of a certain age and disposition might recall such pithy, punchy works as Dolls of Duplicity and Don't Lick Now. Cauldron was known for his over-the-top plots and the ingenious-bordering-on-insane methods by which characters in his stories were dispatched. Perhaps the most notorious example is Mulliver's death at the hands of a radicalised kindergarten class in The Potato Print Protocol, but special mention must also go to The Kitchen Sink for the way in which its assassin protagonist employs numerous murderous techniques all at the same time. 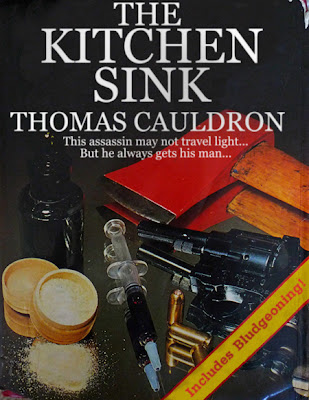 All of Cauldron's novels have slipped quietly out of print, perhaps a consequence of the manner in which he himself died. For, as detailed in journalist Christopher Notchman's recently-published biography of Cauldron, A Shot Rang Out, although the coroner's verdict on Cauldron's 1997 demise was "death by misadventure" – coincidentally also the title of three of Cauldron's novels, and the name of one of his cats – the truth was somewhat murkier. Cauldron actually met his end in Notchman's suburban home, having crashed through the conservatory roof, "destroyed my coffee table, bled on the carpet and died, clutching a book in which the big twist is that the double agent is a foetus." Suitably intrigued, and being a devotee of Cauldron's work, Notchman decided to investigate the writer's colourful life, in the process leaning that not only was Cauldron a prolific novelist and a pioneering wildlife broadcaster, but that he was also a double agent...

Notchman's biography – and indeed Cauldron – were brought to my attention by one of the authors of this website dedicated to Cauldron, which includes an excellent blog featuring some of the lurid covers to Cauldron's novels. A Shot Rang Out is available to buy from the website, and you can download an excerpt from the book as well. I for one will certainly be investigating Cauldron further.

And from a hyperbolic spy novelist to a rather more sophisticated one, as next I'll be returning to Anthony Price's David Audley espionage novels, with a review of the fourth book in the series (following 1972's Colonel Butler's Wolf), 1973's October Men... and I'll also have news of something rather special concerning Mr. Price...
Posted by Nick Jones (Louis XIV, the Sun King) at 04:55