A Very Special Announcement Regarding Spy Novelist Anthony Price, and a Review of October Men (Gollancz, 1973/1992)

Following on from Wednesday's post on forgotten espionage author Thomas Cauldron, let's stay with the spy fiction for the moment and return to Anthony Price's splendid series of novels featuring the operatives of the Ministry of Defence's Research and Development Section, with another book review and a very special announcement about Mr. Price. I'll unveil that announcement in a short while, but first, let's take a look at this: 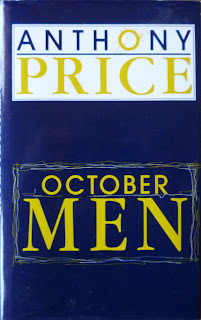 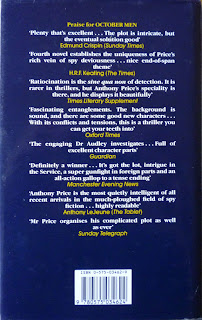 October Men is the fourth book in Price's series, and was first published in the UK by Gollancz in 1973, although the edition you can see above is a later Gollancz printing, from 1992; of all of Price's novels, this one has proved the hardest to track down in first (which isn't to say I won't keep trying). The novel follows in the footsteps of The Labyrinth Makers (1970), The Alamut Ambush (1971) and Colonel Butler's Wolf (1972) – all three of which I reviewed last month – in that, although written in the third person, once again the tale is told from the perspective of a different protagonist – or rather, in this instance, from that of two protagonists. As with the previous novels, Price's lynchpin, the clever, iconoclastic Middle East expert Dr. David Audley, does feature – indeed is central to the plot – but by and large events are related from the viewpoints of two other men, one of whom has appeared before in the series, the other of whom has not.

On the Research and Development Section side of the ledger, we have Captain Peter Richardson, last seen assisting Butler with his spot of student bother in Colonel Butler's Wolf. Recalled from Northern Ireland by Brigadier Stocker – now given a military title having previously been identified only as the man from the Joint Intelligence Committee – Richardson finds himself at David Audley's house in the South Downs, where the husband of Audley's housekeeper, Mrs Clark, has shot and killed an armed intruder. Displaying his now-expected ruthlessness, Stocker presses Richardson, who's on friendly terms with Audley and Mrs Clark, to find out what happened, but more importantly, to try to determine where exactly Audley, Audley's wife, and their new baby are: it seems all three have absconded without notifying anyone where to, and the suspicion is that Audley might have been a double agent all this time, and defected.

On the other side of the ledger is Pietro Boselli, personal assistant to head of Italian security General Montouri in Rome. A confirmed desk man, Boselli is thrust to the front lines when, quite by chance, the General spots an old adversary at the airport – a wartime Italian Communist known as the Bastard. For reasons which are unclear, the Bastard was following Audley and his family, who had just arrived from the UK. And further muddying the waters, somewhere in the middle of all this is Eugenio Narva, an Italian oil man who apparently invested in North Sea oil exploration before it had even been established there were significant deposits off the coast of Britain – which begs the questions, who tipped him off, and how?

As ever with Price's novels, a tangled web of partial information, misinformation and hidden agendas serves to obfuscate the truth of the matter, which ultimately proves somewhat simpler than the various interweaving strands suggest. But it's the piecing together of the mystery that keeps one engrossed, and, each in their own ways, Richardson and Boselli are the perfect viewpoint characters for Price's purposes, in that they're both pretty much out of the loop – although as eventually becomes clear, so is almost everyone else, Audley included.

They're also both agreeable company. Boselli in particular makes for an unusual central character. He could uncharitably be described as something of a coward – he's forever fearful of sticking his neck above the parapet or in any way endangering his position – although Price is actually more sympathetic towards him than that would suggest. In the way in which Boselli is buffeted by events, frequently finding himself in situations over which he has no control and in which he has little to no experience, he's probably closer to how you or I might react in a similar position (as opposed to the clever-clogs Audley or the more militarily-inclined Butler). At one point he's accidentally credited with shooting an assailant during a firefight, and his panic at being found out is palpable. Although destined never to appear again in the series, in his fumbling, terrified, very real manner, Boselli offers further evidence of Price's deft, varied and increasingly confident characterization – all of which bodes well for subsequent books.

I hadn't planned on reading another Anthony Price novel so soon after the initial three – I do, after all, have a stack of books by other authors demanding my attention – but there was a particular reason I decided to re-immerse myself in Price's espionage universe – and that brings me to the announcement I mentioned. Because, in an exciting first for Existential Ennui – which prior to this point has consisted largely of book reviews and matters to do with book collecting – next week I'll be posting an exclusive interview with Mr. Price, conducted by yours truly, in person, just last month. I got to spend a good few hours in Price's company, and the results were both highly enlightening and highly entertaining. As far as I'm aware, this will be the first time an interview with Price has been available online, so fans of his work should find it fascinating reading.

The interview is fairly long, so I'm going to split it into two posts over the course of the week. So do, please, if you can, join me next week for an interview with Anthony Price. It'll surely be worth your while.
Posted by Nick Jones (Louis XIV, the Sun King) at 08:53